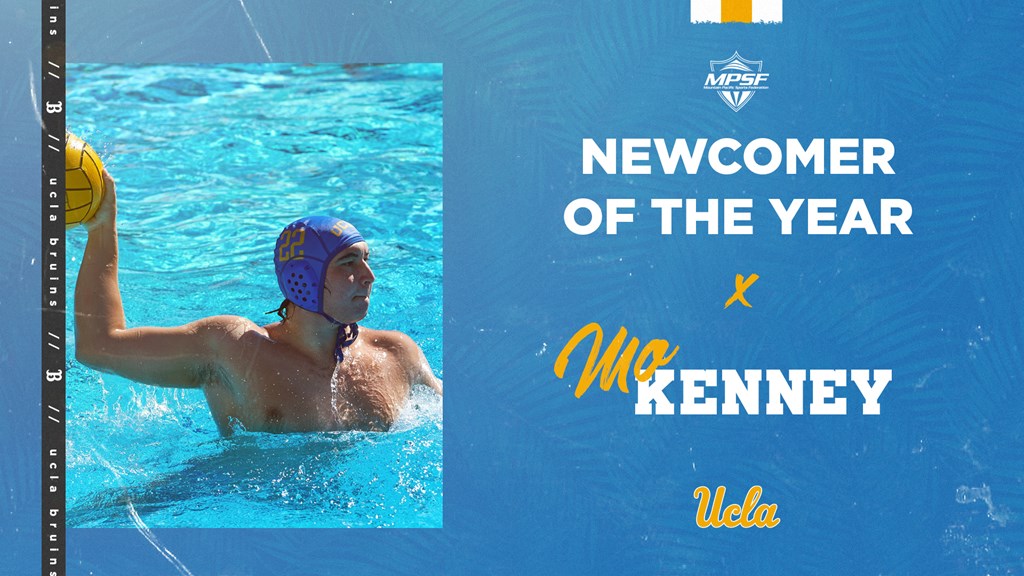 UCLA true freshman Mo Kenney was named Newcomer of the Year with 16 goals and 19 points through the regular season. Current photo via UCLA Athletics

University of California sophomore Nikolaos Papanikolaou (Athens, Greece/49th HS of Athens) ranks third in the MPSF with 25 goals and fourth with 26 points and 14 steals through the regular season. He scored in all 10 of Cal’s regular season games. He earned 44 ejections (15 penalty shots) and is the only player in the MPSF to draw six exclusions against a conference opponent (he did it twice-Feb. 7, Feb. 6). He was one of three in the MPSF to collect four steals in a game, also doing so twice (Feb. 20, Feb. 6). Now a two-time All-MPSF First Team selection, Papanikolaou is the youngest to be named to that list as the only non-junior or senior. He joins Ben Hallock as the only water polo players in MPSF history, across both genders, to go from newcomer of the year to player of the year in consecutive seasons. Papanikolaou is Cal’s fifth all-time MPSF Player of the Year (Luca Cupido-2017, Nick Kittredge-1995; Troy Barnhart-1993, Chris Oeding-1992).

UCLA true freshman Mo Kenney (Costa Mesa, CA/Newport Harbor HS) has recorded 16 goals (tied for sixth in the MPSF) and 19 points (ninth in the conference) through the regular season. His 16 goals are tied for the conference lead among freshmen, while the 19 points are second among first-year players. He scored in all seven of his regular season games he played, including three hat tricks (Jan. 30, twice on Feb. 21). Kenney made his collegiate debut against No. 5 Pepperdine (Jan. 30).and scored a game-high five goals on just six shots (.833) in leading the Bruins to a 15-9 win in their only home game during the regular season. As a result, Kenney was the only freshman this year to be named an MPSF Player of the Week. Kenney is the second Bruin all-time to earn the MPSF’s Newcomer of the Year award (Garrett Danner, 2013).

University of California head coach Kirk Everist guided the Golden Bears to a 7-3 (.700) regular season record, the MPSF’s top tournament seed and the nation’s No. 1 ranking. All seven of California’s wins were against MPSF competition and against top-four opponents. Cal was the only MPSF team to complete a weekend sweep, winning all three games at USC (Feb. 6-7). MPSF player of the Year Nikolaos Papanikolaou ranks in the MPSF’s top-four in three categories (goals, points, and steals). California shared the conference-high with three players as first team All-MPSF selections (Papanikolaou, Jack Deely, and Nikos Delagrammatikas). Everist is 390-121 overall (.763) since taking over the Golden Bears’ program in 2002. This is his second MPSF Coach of the Year award, and his first since his initial season. This is also the fourth time Cal has received the MPSF Coach of the Year award (Everist-2002; Steve Heaston-1995, 1992).