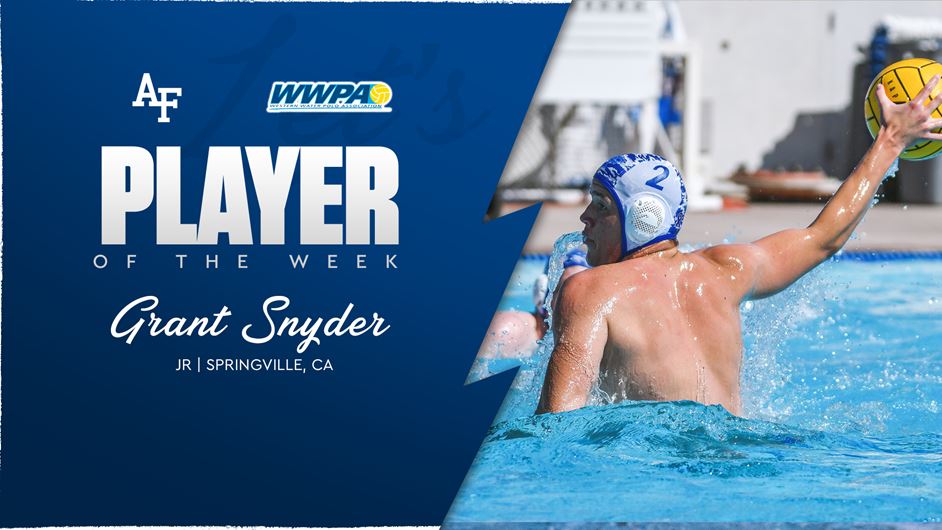 In the three games at the Cadet Natatorium, Oct. 16-17, Snyder had 13 goals and five assists for 18 points. Current photo via Air Force Athletics

U.S. AIR FORCE ACADEMY, Colo. – Air Force junior Grant Snyder was named the WWPA Player of the Week for helping the Falcons to a 3-0 record last weekend, including a pair of conference victories.

In the three games at the Cadet Natatorium, Oct. 16-17, Snyder had 13 goals and five assists for 18 points. He also had two drawn exclusions, five steals and won all five sprints he took. The native of Springville, Calif., posted five goals in wins over Austin College and Concordia. In the overtime win over WWPA rival Santa Clara, he had three goals and five assists for eight points.

Air Force, 16-3 overall and 5-1 in the conference, travels to California for five games in three days. In a battle of the top two teams in the WWPA, the second-place Falcons will face the first-place, and ninth-ranked UC Davis Aggies, Friday, Oct. 22, at 1 pm MT. Air Force will then play four games in two days at the Julian Fraser Tournament, Oct. 23-24, in Santa Clara, Calif. Air Force will face 12th-ranked Princeton, along with Brown, Bucknell and Iona.