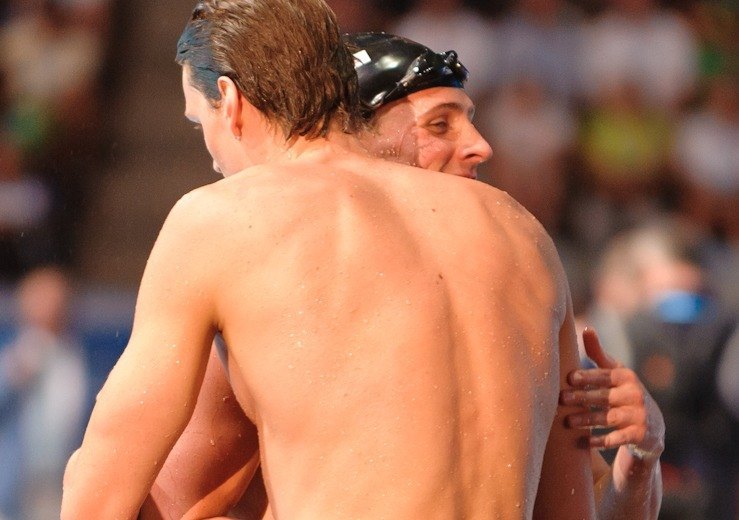 Swimswam / Braden Keith coverage of the men’s 200 freestyle at the 2013 FINA World Championships:

Coming into this meet, Bob Bowman had coached either the gold or silver medalist in the 200 free at the last four World Championships.

This year, he coached both the gold and the silver medalist, as France’s Yannick Agnel led this race basically wire-to-wire to win in 1:44.20, and his training partner Conor Dwyer from the United States took silver in 1:45.32.

Both swimmers are recent transfers to Bob Bowman’s program in North Baltimore, but both have been with him for long enough to consider him as having a significant influence on their performances.

Meanwhile, Russia’s Danila Izotov, the world leader coming into the meet, was 3rd in 1:45.59. Ryan Lochte got off to a slow start, sitting 6th after the first 50, and though he made a lot of that ground up going into the 100 meter turn, he just didn’t have the endurance on the last 50 to make any more room.

I wouldn’t call this 1-4 finish order an ‘upset,’ but I certainly doubt that it’s what many would have picked after Agnel’s health issues that initially had him choosing to scratch this event altogether, and then not looking great (1:47.0) through the first two rounds. Dwyer too had already been four-out-of-his-five best times in the last 6 weeks, but knocked almost another full second off of the time that earned him this swim for that silver medal.

Conor Dwyer sneaked in there to nab second place! his reach is incredible