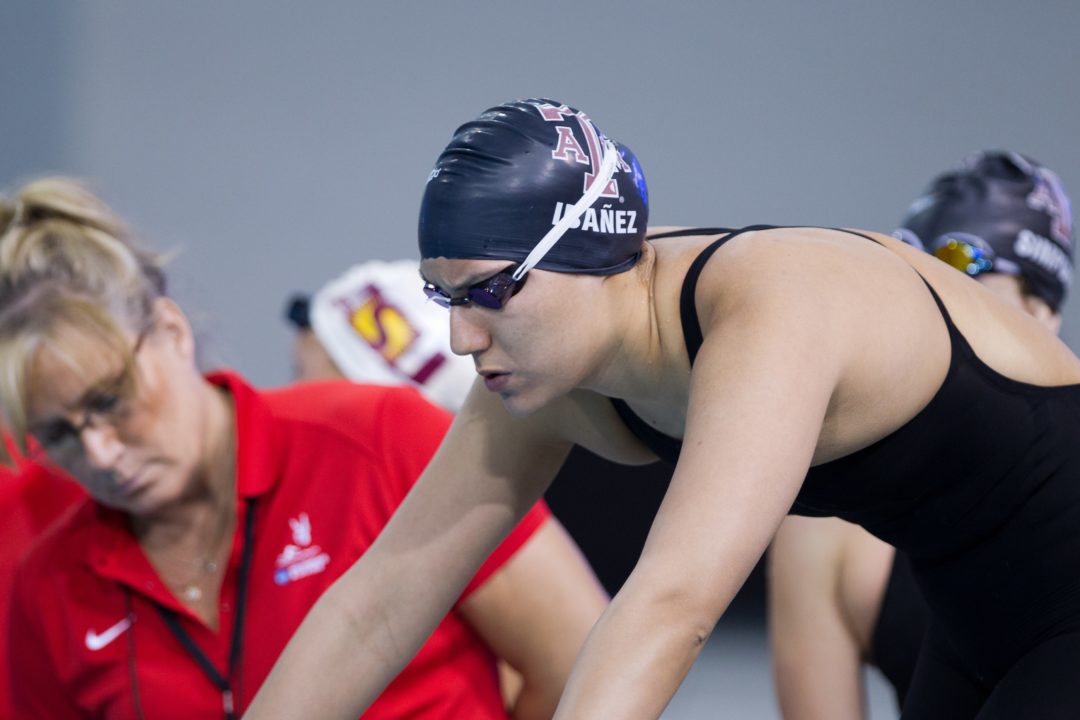 The Aggies were back in action very shortly after the kick-off of this meet with Lili Ibanez swimming a 2:01.25, which is just a tenth off of her National Record set at last October’s Pan Am Games. That reaffirms her FINA B-time in the event.

She showed strong fitness to close in 30.58 (which was faster than her third 50).

Under normal circumstances, a swimmer about matching a time from one taper meet to the next would be unremarkable. But for Ibanez, who cracked three vertebrae in a bike accident just after returning from the Pan Am Games, this is remarkable. She was forced for 6 weeks out of the water, and then a long and slow rehab process after that.

After the injury, there was a chance that she wouldn’t swim again in a year, if ever, let alone get back to an elite level just 6 months later. This is truly an impressive, gutsy performance, and look for more of the same in the 100 on Saturday.

In the second women’s event of the night, Ibanez’s collegiate teammate Erica Dittmer (who only changed her sporting citizenship to Mexico in the fall) won the 100 breaststroke in 1:11.00, which was three-tenths away from a National Record. Unlike what we saw in the 200 IM earlier in the meet, this was, in fact, a best time for her. This swim misses the FINA B-time by just .11.

Dittmer now makes even more impressive an incredible women’s breaststroke group that will take hold in Aggieland next year, that includes the fastest swimmer ever in yards Breeja Larson, and a pair of great incoming freshmen in Ashley McGregor and Romy Landeck.

And closing out the session, with a clean sweep of the senior-level events, was Rita Medrano in the 50 fly in 27.70, which is the best time of her career. That missed the National Record by just .02 (a record that’s held by her teammate Ibanez).

The Texas A&M girls breast stroke group should be the fastest and deepest in the country next year, and I think the IM girls are even deeper with Sarah and Cammile in the 400 and Caroline, Erica, Kim, Ashley and Paige earning points in the 200 IM.