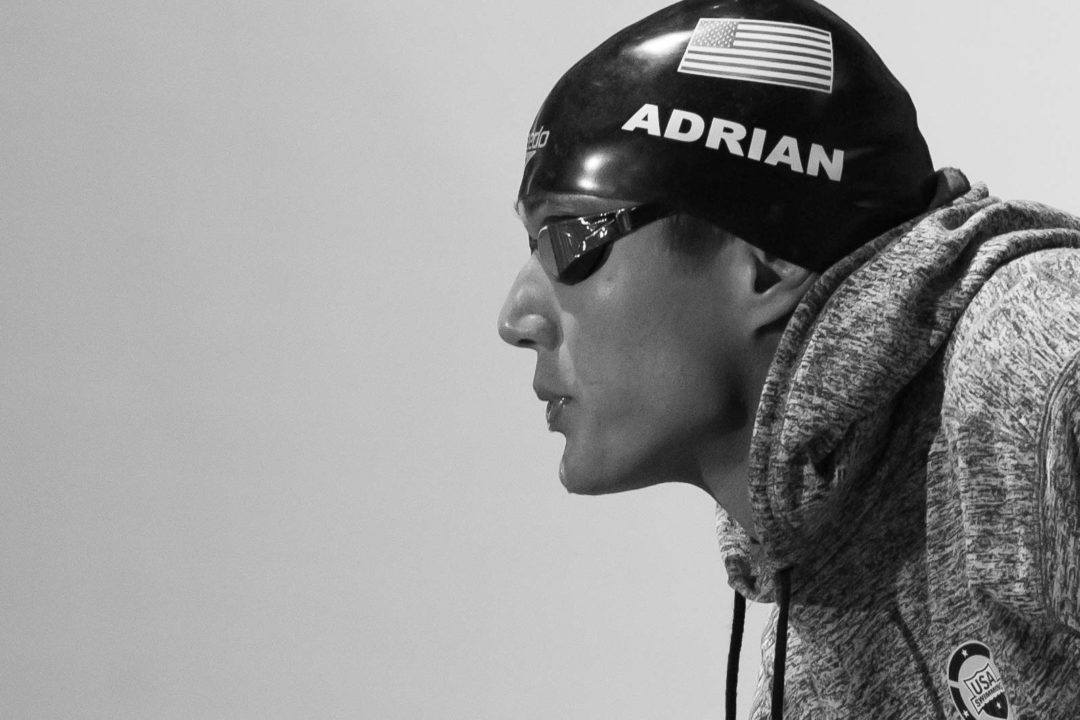 Nathan Adrian is one of six who are running for three USA Swimming Athlete Director spots. Archive photo via Mike Lewis/Ola Vista Photography

Below, take a look the nominees’ video statements and cover letters for the positions:

Hello, all my name is Nathan Adrian. I am a current USA Swimming National Team member preparing for the 2020 Olympics. I have been a member of USA Swimming for almost 25 years and been a part of the National Team for 10 of them. In that time, I went from wide eyed 19-year-old watching Michael Phelps achieve the impossible to a veteran who has been around the block.

I have applied for an athlete position on the USA Swimming Board of Directors. As an athlete I started in an era where we felt like our voices were never heard. Recently, there has been a huge (and appreciated) effort to change that. I hope to further this agenda by helping to bridge the gap between the National Team members and the governance that affects us all. My vision for this role is to represent the interests of the National Team as a whole, not any given individual or subset of the group.

I have been ex-officio, non-voting member of the USA Swimming Board of Directors since 2016 due to my elected USOC Athlete Advisory Council position. I have been a member of USA Swimming for 30 years, starting as an age group swimmer at age 6. I was a National Team member for over 18 years and an NCAA swimmer for 4 years. I have experienced every level of this sport from beginner to Olympic champion. Along the way, I have made many great relationships with USA Swimming staff, former and current National Team members, as well as countless volunteers. Swimming has undoubtedly changed my life for the better. I am grateful for the many years that I competed for USA Swimming whether at the age group or Olympic level. I would love to continue to participate on the USA Swimming Board of Directors to continue to be a voice for the athletes and give back to the sport that has given me so much.

I started ‘swimming’ when I was three and my brother was less than a year old, we were the ‘demo’ toddler and baby for my babysitter’s swim school. By the age of six, my parents had signed me up for my local club team the Midland Dolphins. Over the coming twenty plus years, my parents ferried me from practice to practice, sport to sport, meet to meet and game to game. I tried multiple sports over the years but the one that was my passion was swimming. I slowly climbed the ranks of the sport going from States to Sectionals, Grand Prix’s, Juniors, Nationals, Short Course Worlds, Pan American Games and a few Olympic Trials. The sport of swimming allowed me the opportunity to connect with people all over the world, experience different cultures and ultimately earn my degree and compete for the University of Tennessee. Through those years I competed for SEC titles, attended NCAA championships and furthered my education. After graduating from the University of Tennessee I worked in Knoxville, began a professional swimming career and began to pursue my MBA. Having graduated from Central Michigan University with my MBA and ‘retired’ from swimming, it is time for me to give back to the sport that has opened so many doors for me, given me so many opportunities and helped shape me into the man I am today.

Approaching my 19th year as a member of USA Swimming, I’m honored to be considered for a position on the board of an organization that shaped my life in many wonderful ways.

My journey through USA Swimming took me from the club level with Neptune Swimming in Santa Rosa, California to the National Junior Team, collegiate swimming, and then Pan Pacific Championships, World Championships, and the Olympic Games. From my first 25-yard freestyle race as a six-year-old to my final, gold-medal winning race in Rio, USA Swimming played a crucial part in my development as an athlete and teammate.

In life on dry land, I graduated from Stanford University in 2014 with a degree in Management Science & Engineering and went on to work at McKinsey & Company before making the move the social sector. At King Philanthropies, I now work to alleviate extreme poverty by supporting high-performing organizations working where needs and challenges are greatest.

The lessons to be learned and experiences to be had through swimming are unmatched in the world of youth sports. USA Swimming has created a wonderful environment for young athletes to develop their competitive drive, appetite for hard work, and leadership abilities while also perpetually fielding the world’s most successful swim team. The possibilities to expand the sport, create additional opportunities for the nation’s best swimmers, and continue to develop the best and healthiest environment in youth sports excites me tremendously, and I hope to continue to be a part of this organization for many years to come.

Swimming has been a part of my life as long as I can remember. I was learning to swim before I could walk, and the sport has stayed with me ever since. I have competed in mini meets, summer league meets, high school and college meets. And through a lot of hard work and an incredible amount of support, I was a national team member for nine years, representing USA Swimming at World Championships and the Olympic Games. Towards the end of my career, I realized I had more to give back to the sport. While my experiences with USA Swimming have been overwhelmingly positive, I felt like there was still room to grow and improve, and I wanted to help USA Swimming get there. Since 2014, I have been involved in both local and national levels of governance in trying to make sure that future swimmers, of all levels, have even better opportunities than I had. I want every athlete to have the chance to fall in love with the sport that I love. I am hopeful that I will to continue to be able to serve USA Swimming as a member of the Board of Directors and help guide the organization to an even brighter future.

Davis Tarwater is a speaker, investor, entrepreneur, and 2012 Olympic Gold medalist as a member of 4 x 200 free relay in the London Games. After a distinguished athletic career that included competing in three World Championships (2005, 2007, and 2009), Davis also held the American record in the 200-meter butterfly (SCM) from 2011-2013 and won three NCAA titles at the University of Michigan. He retired from professional swimming in 2012.

In 2013, Davis co-founded Gulfstream Capital, LLC, a private wealth management firm located in Knoxville, TN, where he remains a partner. Additionally, he speaks and consults with athletes, entrepreneurs and businesses on how to effectively engage transition.

Davis also serves his community by participating on a variety of non-profit boards. He is the Board President of Tennessee Aquatics, the largest swimming club in Knoxville. Additionally, in his local community, he serves on the board of the Webb School of Knoxville and the East Tennessee YMCA. Finally, he has served as a member of the USA Swimming Board of Directors, participating on the investment committee and national board of review.

One of the first things that needs to be done by a new Board is to see that more money flows from USA Swimming to athlete support. 2017 audited financials available online show that on the program support side, $6.1 million out of a $31.7 million budget went to salaries of USA Swimming and its Foundation officials, while only $2.9 million was spent on direct athlete support. That is an unacceptable two-to-one ratio. On the support services side, $4.1 million of a $7.4 million budget went to salaries and benefits of USA Swimming officials.
https://www.usaswimming.org/docs/default-source/accounting/2017-audit.pdf

As a parent, I’m glad to hear that the candidates are prioritizing Safe Sport as foundational to the organization. Gold medals are meaningless if the athletes are not in a safe and nurturing environment.