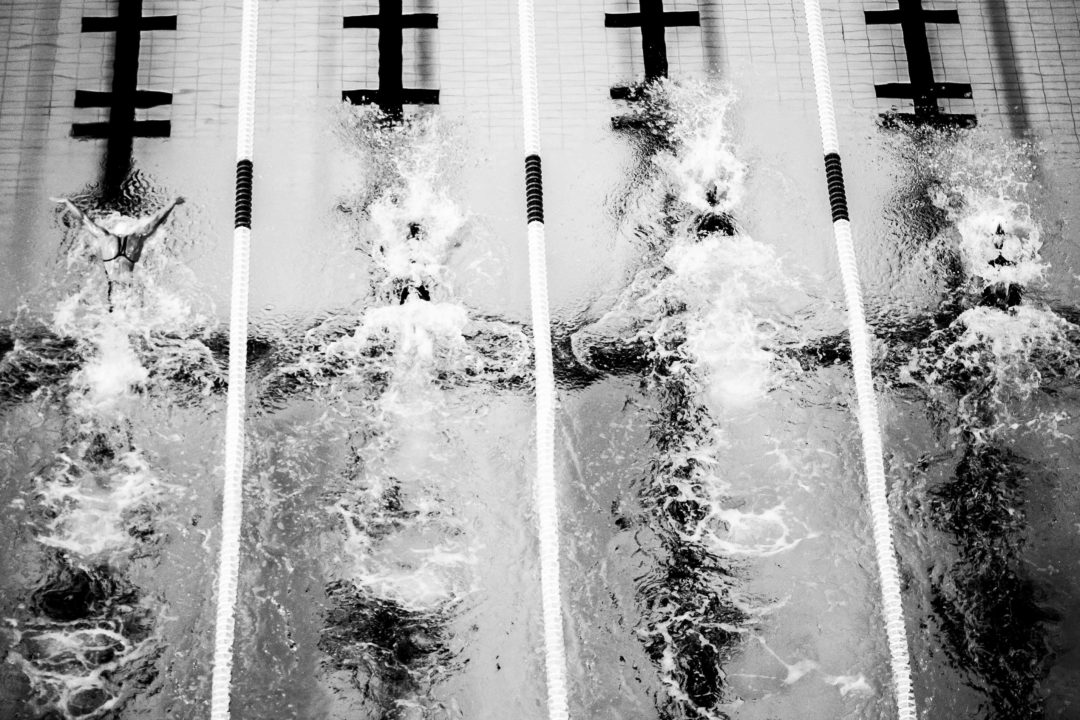 Steve Nye, the Greater Columbus Swim Team of Ohio head coach for the past four decades, died on Saturday from pancreatic cancer. Nye joined the team in 1979. Stock photo via Jack Spitser/Spitser Photography

Nye had been the head coach of GCST for the past 41 years. He joined GCST as an assistant coach in 1979. In the spring of 1980, Nye was promoted to head coach after Bruce Barlow retired from the position.

“Steve really understood ‘it takes a village’ and was proud of everyone involved in building this team, including his family, athletes and their families, coaches, officials, volunteers and more,” GCST wrote on social media.

“His leadership, jokes, stories, piercing whistles, creative dryland exercises and, most of all, his words of genuine encouragement will be so dearly missed by all who knew him.”

During his career, Nye was named to the  USA Swimming National Team Staff where he coached at the 1990 US Olympic Festival, the 1991 National Junior Team Training Camp, the 1992 National Team at the Quebec Cup, and the 1994 National Team Dual Meet Series.

Nye was a dual-sport athlete at Denison University where he graduated with a bachelor’s degree in biology in 1979. There, Nye accomplished a rare feat: becoming an individual event conference champion and national qualifier in both swimming and diving.

He went to OSU to continue his education in the field of  Exercise Physiology, specializing in athletic training and swimming injuries. He obtained a Maste’rs degree and a Doctorate in the field.

Nye is survived by his wife Juli, and his 3 daughters, Lauren and Victoria and Alexandra.

The swimming world lost one of the absolute best this week. Steve coached me for a couple years during my college days but I grew up in Columbus and saw him at every single meet. He was always laughing and cared for his swimmers like they were his own kids. My favorite story was at 1999ish nationals the lanes were swamped during warmup as usual. He put me in the pace lane so I could have some room to swim and he pretended to call out pace times while looking at his analog wristwatch (shhhh…don’t tell usaswimming haha). He was just the best.

Extremely saddened to hear about Steve. We roomed together on a trip in 1990 and were friends ever since. Always welcoming, energetic and innovative. He used to have his team swim synchronized breaststroke in practice (and meets, space permitting) and the athletes would all call out “Whoop!” in unison as they breathed. Steve understood that it was much more than just the final time or finish. RIP my friend.

Somber news out of Columbus, Ohio. Steve Nye was class act, a good man and one heck of a swimming coach. Prayers to to his family, friends and athletes. Steve coached with a lot of heart, enriched countless lives and always left it all on the pool deck.

A class act. I never swam for Steve, but I had the fortune of getting to know him a when one of my college teammates did. Prayers to his family and his swimmers.

The loss is devastating. For his wife and daughters, immeasurably…For the swimming community, immensely. For their community, impactfully. For all of us who were lucky enough to have known Steve and even luckier for the positive impression, impact and mark he made in our lives, painfully…woefully. Steve coached me in my youth. Then as an adult he provided me the opportunity along with the tools, knowledge, and resources to coach with him at GCSTO. I soon saw him not so much as a boss (though he definitely was & I did not for get that fact either lol)…but more as a mentor – my mentor (though again, I know others looked to him in the same manner). He became my… Read more »

Very sad news to hear of Steve’s passing. Growing up in Ohio swimming during the early 90’s, I can remember the countless meets that Steve’s GSCTO team and my team participated in together. It was impossible not to know Steve was in the house. You could literally hear his whistling outside of any venue. He always had a smile on his face and my friends who swam for him absolutely adored him. I wish his family strength and peace during this very difficult time.

I went to Whetstone High School with Steve. He always had a smile on his face. God bless Steve and his family.