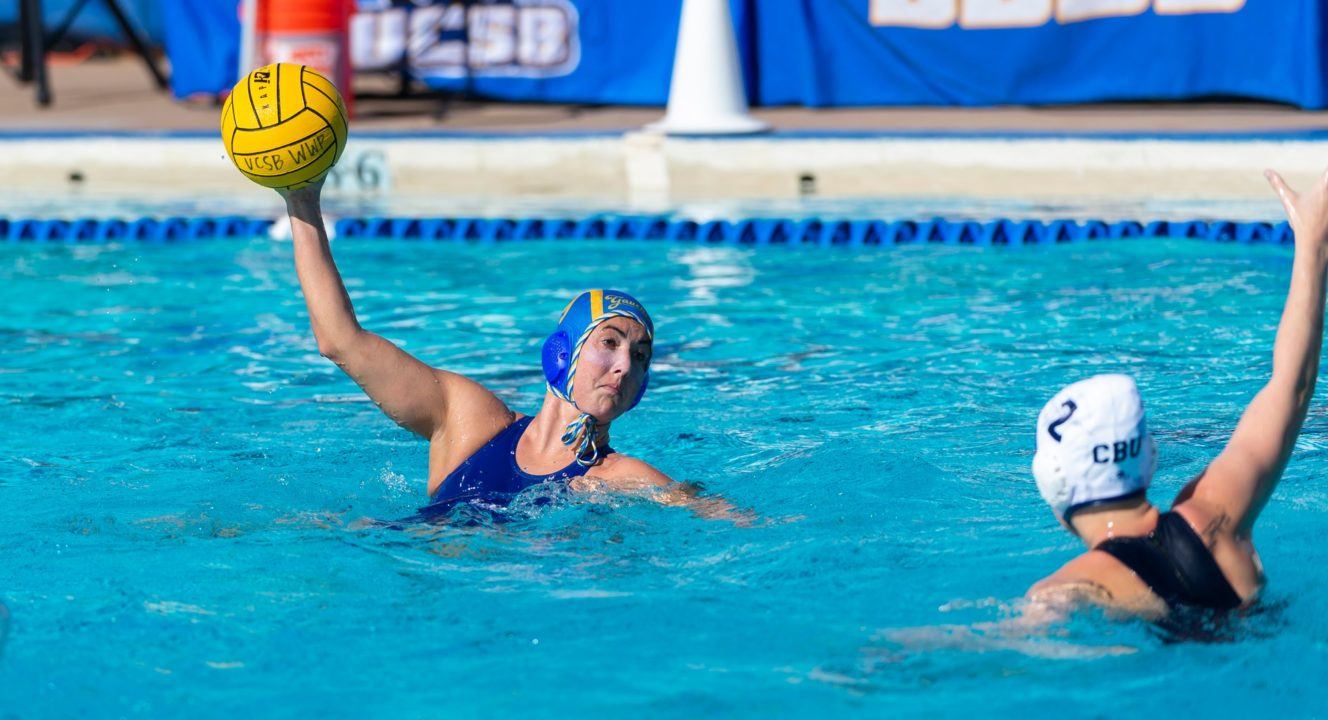 The No. 7 UC Santa Barbara women's water polo team took a sixth place finish at the Triton Invitational, using a hot start to take down No. 11 UC Davis, 11-5 before falling in a rematch against No. 9 Arizona State, 7-5. Current photo via UC Santa Barbara Athletics, Jeff Liang

LA JOLLA, Calif. – The No. 7 UC Santa Barbara women’s water polo team took a sixth place finish at the Triton Invitational, using a hot start to take down No. 11 UC Davis, 11-5 before falling in a rematch against No. 9 Arizona State, 7-5.

UC DAVIS
Facing the Aggies (6-6) in their third game of the weekend, the Gauchos (11-3) jumped out to an 8-2 lead before halftime en route to a commanding 11-5 win. Freshman Amanda Legaspi led all players with three goals. Mollie Simmons, Sarah Snyder and Caitlyn Snyder all scored twice for UCSB.

Davis was actually the first to strike, getting a goal from Noelle Wijnbelt 37 seconds in, but it would be all UCSB for most of the half. Kate Pipkin would tie things up with an equalizer on the Gauchos’ next possession, starting a run of seven unanswered. Dara Bleiberg‘s goal at the 2:58 mark of the second put her side up 7-1.

The two teams would match each other with three goals each in the second half as Santa Barbara went on to claim its seventh win in eight tries.

Five different Gauchos finished with two assists, but Caitlyn Snyder was the only one to record two goals and two assists. On the defensive end, goalkeeper Kenzi Snyder tallied six saves and Bleiberg led her team with two steals.

ARIZONA STATE
Facing Arizona State for the second straight Sunday – this time, in the Triton Invitational fifth-place game – the Gauchos weren’t able to repeat the success which saw them defeat the Sun Devils 11-10 last week, as they fell 7-5.

Both teams traded goals for most of the first quarter, which UCSB ended on a 3-1 run with goals coming from Caitlyn Snyder, Simmons and Legaspi. The Sun Devils would score the only two goals of the second period though, taking a 5-3 lead into halftime.

After holding ASU scoreless for the first half of the third quarter, a goal from Sarah Kreiser at the 3:59 mark brought UCSB within a goal, 5-4. Another Sun Devil goal would be answered by Shannon Moran, who scored with 4:34 left in the game to make it a one-goal deficit again at 6-5.

Unfortunately for the Gauchos, that would be their final goal of the day. ASU tacked on one more in the final minutes to seal the win.

NEXT UP
The Gauchos will be heading to UC Irvine next Friday through Sunday to compete in the Barbara Kalbus Invitational.