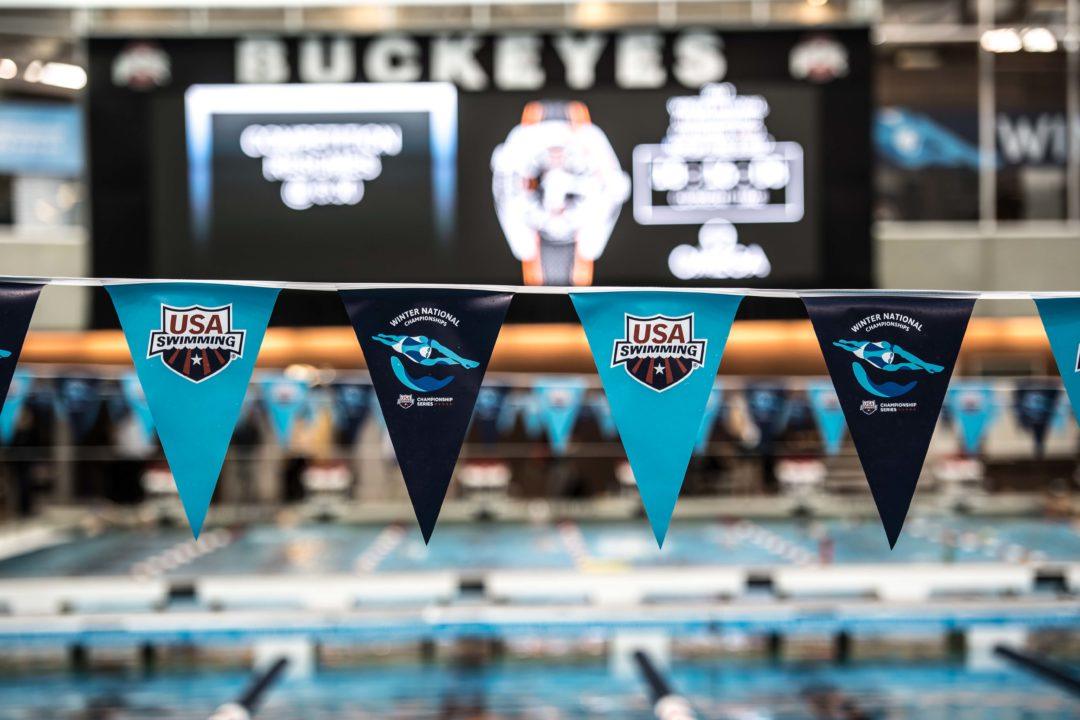 The newly-elected members will serve a 2 year term. 3 of the 4 elected individuals return to the committee after serving prior terms. Stock photo via Mike Lewis/Ola Vista Photography

4 new members were elected to join the Athletes’ Executive Committee last week at the USA Swimming Convention, chosen from 5 nominations received. The group includes 2 collegiate varsity swimmers, 1 collegiate club swimmer, and an age group coach who is working her way through college and expecting to graduate in May 2020. Each of the 4 new members will serve 2 year terms.

Simmons, Norris, and Noble are both serving their 2nd straight terms on the committee after a big restructuring last year. Simmons and Norris were elected last year, while Noble took on a shortened term in April of this year.

Jake Simmons, a returning member of the committee, has worked in several LSC-level appointments. He swam in his youth in Alaska and is now a varsity swimmer at Division II Colorado Mesa University.

Annie Norris, another returning member, served as an athlete rep on the Open Water National Committee from 2017-2018 and an At Large Athlete Representative in 2018. She grew up swimming in Houston with the Houston Swim Club, Swim Houston Aquatic Center, and Katy Aquatics, and is currently a member of the Lehigh University swim team.

Dakota Noble took over a seat on the committee in April and will now extend that position by 2 years. She was an Athlete Representative from 2013 through 2018 while a member of the Rockford Riptide Swim Team. She’s currently attending Grand Valley State, and while not swimming there, she is an age group coach with the Rockford Rip Tide and also works with a local Special Olympics team.

Maria Davila has served in a number of administrative positions within swimming, including as a Western Zone Athlete Rep who is currently serving on the zone’s Diversity and Inclusion Committee, the rules and regulations committee, and the Board of Review. She swam for South Bay Aquatics in the San Diego area in her youth, and is currently a member of the club swim team at Cal.

The 4th nominee is Josie Uerling from Oklahoma, who is currently on the varsity team at Emory.

ATHLETES’ EXECUTIVE COMMITTEE (Year in parenthesis is when term expires)