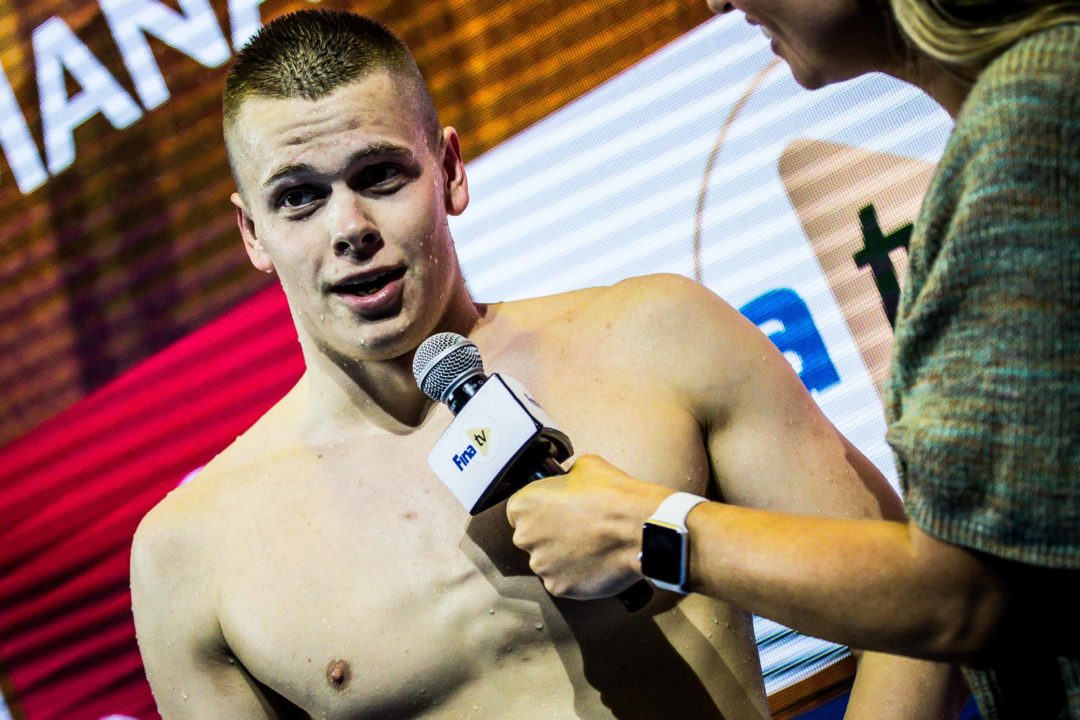 Plenty of fast times were produced on day 1 of the FINA World Cup - Tokyo, with 3 series records being taken down in the process. Archive photo via Jack Spitser/Spitser Photography

The first day of the first stop of the first cluster of the 2019 FINA World Cup kicked off today in Tokyo, already with three World Cup Records going down during this evening’s finals.

Lithuanian Danas Rapsys, the man who took 5th place in the 400m free just a week ago at the World Championships in Gwangju, Korea, won the event tonight in Tokyo in a time of 3:45.57. That checks-in as a new World Cup Record, surpassing the previous mark of 3:46.76 held by Great Britain’s James Guy since 2015. Guy has since foregone the 400m free in international competition in favor of focusing on the 200m free and 100m fly events.

Rapsys hit a time of 3:44.31 in the final in Gwangju, so the 24-year-old wasn’t too far off, sitting just about a second off of that mark. But, Rapsys represented a one-man race tonight, as the next closest competitor, Zac Reid of New Zealand, touched over 3 seconds later in 3:50.24, while Canada’s Jeremy Bagshaw took bronze in 3:52.20. Reid’s time tonight outperformed the 3:51.25 he logged in Gwangju for 18th.

Schoenmaker’s time beat out the 2:22.52 she put up at the World Championships for silver behind winner Yuliya Efimova of Russia. The 22-year-old holds the South African national standard in 2:21.79, the time she produced in Gwangju semi-finals.

The 3rd and final World Cup Record to fall was courtsey of Belarusian breaststroker Ilya Shymanovich. The man took gold tonight in a time of 58.73, his 2nd best time of the year, surpassing South African Cameron van der Burgh’s World Cup Record of 58.97 registered back in 2015.

Shymanovich holds a personal best of 58.29 in the 100m breaststroke event, which he logged earlier this year. He did notch a World Championships prelims time of 58.87 but came away medal-less after hitting just 59.38 in the 100m breast semi-finals in Gwangju.

It was a close men’s 1breast this evening, with runner-up Yasuhiro Koseki touching in 59.01 for silver, while American Andrew Wilson was just .01 behind, getting his hands on the wall in 59.02 for bronze. Wilson ranks as the fastest American this season in 58.95 from Worlds. Usual 100m breast suspect Michael Andrew of the United States opted to race the 100m fly and 50m free tonight in Tokyo.

For Andrew, his 100m fly race saw him accomapined by 3 other Americans in Ryan Murphy, Andrew Seliskar and Zach Harting. Murphy already hit a new lifetime best in this 100m fly event in 52.13 to start off his morning, but couldn’t keep pace with the field tonight, finishing 8th in 52.51. That’s still a big-time swim from the backstroke Olympic champion.

Seliskar is the man with the gold, with the Cal Bear clocking 51.34 for first place. After producing a time of 51.43 this morning, a mark just shy of his own lifetime best of 51.42 posted at the Cal Aquatics-Alto Swim Club Dual Meet this past June, Seliskar fired off a 51.34 to now sit as the 3rd fastest American this year. He’ll have to see if that time holds on to survive U.S. Nationals and the Pan American Games for USA National Team qualification.

Runner-up in the men’s 100m fly was earned by Australian Grant Irvine in 51.63, while Hungary’s newest team member, Sebastian Sabo, got it done for 3rd place in 51.67.

Australia’s Kiah Melverton won the women’s 400m free in a time of 4:06.71, producing the 2nd fastest time of her career. Her lifetime best rests at the 4:06.25 from 2018, so tonight marks just the 2nd time the also-open water swimmer has delved under the 4:07 barrier.

Spain’s Olympic champion in the 200m fly, Mireia Belmonte, had a rocky World Championships, missing out on the finals in all of her events, save the 1500m free due to a scratch. She persevered here for silver in 4:06.81, touching just .10 behind Melverton.

Japan got on the board thanks to Miyu Namba‘s outing of 4:09.39, a time that ties what she threw down at the Japan Swim in April to take the Japanese National title in the event.

America’s Jacob Pebley stepped up from silver in 1:56.37, beating the 1:56.72 he logged for 6th place in the World Championships final in this event.  Japan’s Hayate Matsubara came into the wall in a mark of 1:57.74 for bronze.

Sprint star and World Championships 100m freestyle silver medalist Cate Campbell was beaten in the women’s 450m free tonight by Sweden’s Michelle Coleman. C1 touched in 24.81, but Coleman produced the faster 24.66 to get the job done and stand atop the podium.

For the men’s 50m free it was last year’s World Cup overall champion Vladimir Morozov who got his circuit started off right. The former USC Trojan nailed a winning effort of 21.56, a mark within striking distance of his own WC Record of 21.49 from last year.

Hungary’s Katinka Hosszu found her mojo in the 200m fly, snagging the gold in a time of 2:07.10. That beat out Olympic finalist Brianna Throssell‘s time of 2:07.35, while Zsuzsanna Jakabos reaped bronze in 2:08.86.

For Throssell, she opted out of the 2fly in Gwangju, instead focusing on the 100m fly and freestyle race. She was a member of Australia’s World Record-setting 4x200m free relay that topped the podium.

Finally, Emily Seebohm, absent from the World Championships due to finishing behind teenagers Kaylee McKeown and Minna Atherton at their Aussie World Trials, got some racing in tonight. Seebohm clocked 28.03 for 50m back gold. She holds the World Cup Record in 27.49 from 2015, the year she became the 100m back/200m back World Champion in Kazan.

Lots of Kalisz American friends went to World Cup. If he thought it was just missing his taper, he would have gone with them to put up some good timesZ

Rapsys finished 4th at the worlds, not 5th