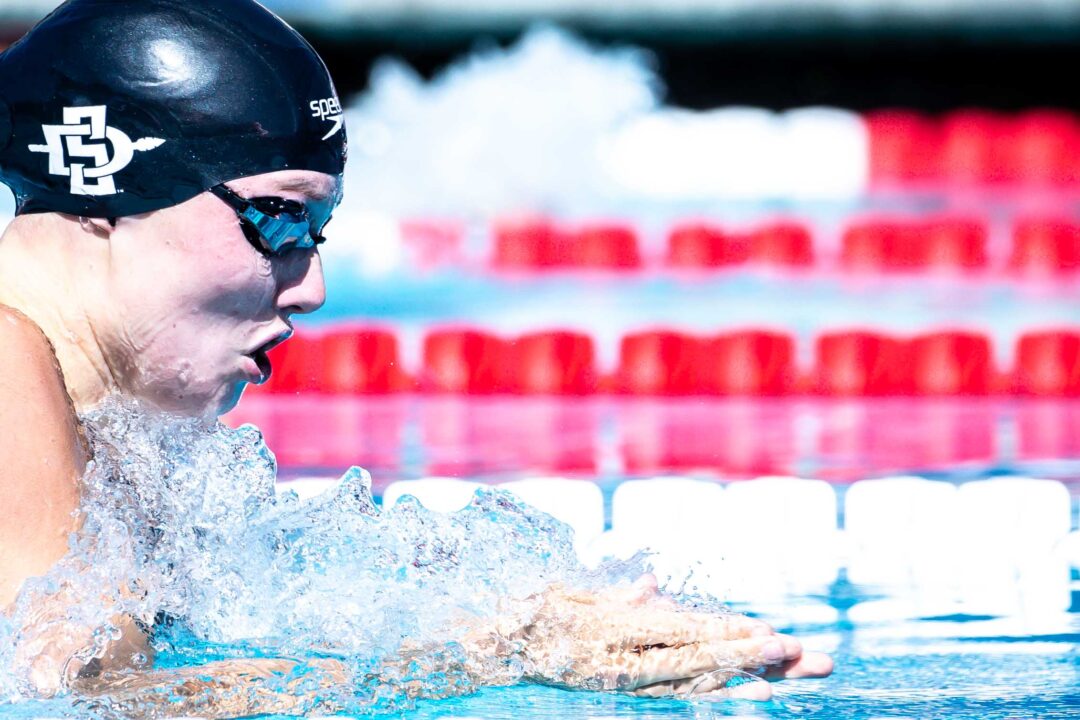 San Diego State senior Klara Thormalm is projected to be a driving force behind the Aztecs' push to win the conference title after a close third in 2021. Archive photo via Jack Spitser/Spitser Photography

The 2022 Mountain West Championships are shaping up to be a showdown between San Diego State and reigning champions UNLV.

The Nevada teams graduated a significant number of points from last year’s championships–Nevada 208, and UNLV 207. Both the Nevada juniors and UNLV juniors, the classes that scored the most at the 2021 championships, are returning for at least this last championship, as well as San Diego State’s Klara Thormalm, arguably the best swimmer of the meet last season in the 100 breast.

Though Nevada is returning the most individual points from last year’s championships, San Diego State’s fast times threaten to push Nevada from its No. 2 spot–though all three teams last year were within 40 points of each other (UNLV 1349, Nevada 1340, San Diego St. 1309).

Some races are locked down, like Thormalm’s performances in the breaststroke. Others have contenders within mere tenths of each other, and someone who’s on their A-game might be able to shift the burden of points in their favor. Let’s check out some of the closer calls:

50 free: Currently, Thormalm has the best time of the season at 22.64, from the Phill Hansel Invite, followed by UNLV’s Kristina Schneider at 22.76. SDSU’s Sammy Geyer and Lizzie Menzmer are at 22.84 and 22.88 respectively, and Colorado State’s Kristina Friedrichs is at 22.89, so while it’s likely SDSU will take at least one of the top-3 spots, it’s unclear which ones.

100 fly: Corbyn Cormack, a freshman at Air Force, hasn’t yet had a conference championship under her belt, but she currently boasts a 53.57, the best time in the MW. Friedrichs follows closely behind with a 53.84, and Nevada’s Josien Wijkhuijs and SDSU’s Cassie Phillips round out the top four spots with a 53.91 and 54.00, respectively. Of the four, Wijkhuhis was the only one to swim the event at conference championships last year, scoring 2nd behind UNLV’s Sarah Koopmans.

200 IM: Cormack also holds the top seed in this event with her time of 1:59.40, closely followed by SDSU’s Kristina Murphy at 1:59.44. Murphy came in 2nd last year at the championships, so a win in her senior year undoubtedly provides motivation. UNLV’s Ruby Howell also isn’t far behind with her time of 2:00.18. She just missed the podium last year, coming in 4th at 2:01.06, so she’ll also likely be looking to earn a medal.

Even with the potential for Nevada to win major diving points, it’ll be difficult for the team to catch up with SDSU and UNLV, who are a couple of hundred points ahead of the pack.

Between UNLV and SDSU, there is room in the swimulated data for the two to switch up who scores points. For example, the 50 free is anyone’s game for the two schools, and the IM races have swimmers from both schools pushing for the podium with only a couple seconds at most between them.