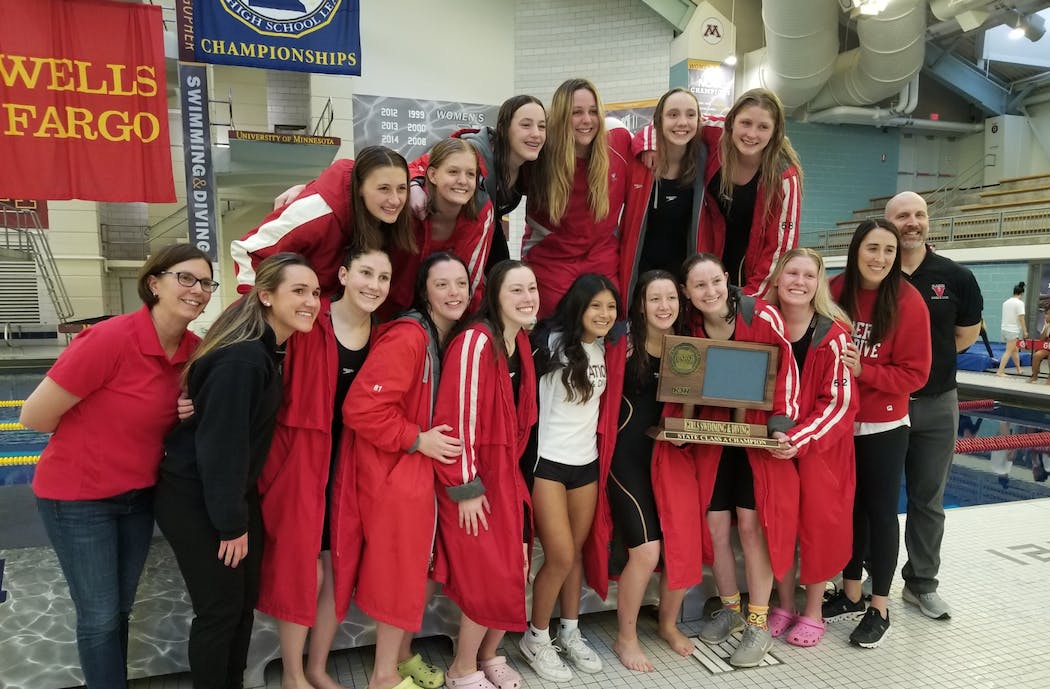 Visitation (above) picked up its 9th straight 1A title at the MHSHL Girls State meet, while Edina narrowly edged Minnetonka for the 2A title. Current photo via Heather Rule, Star Tribune

The 2022 MSHSL Girls State Swimming Championship was held this past weekend in Minneapolis, Minnesota.

In class 1A, Visitation dominated the team standings. With a score of 397 points, they won their ninth consecutive title, and thirteenth title since 2005. Second place was Delano, who scored 194.5 points.

In a much tighter team race, Edina topped Minnetonka as a result of the final event. Going into the last relay, Edina needed a minimum of a 6th place finish to tie Minnetonka in the team standings. Edina ended up 3rd in the 400 freestyle relay, and claimed their fifth title since 2016.

Visitation’s Anna Farley was their only other individual winner, as she defended her title in the 200 IM with a time of 2:05.55. A. Farley, a Villanova commit, was trailing Mound Westonka-Holy Family’s Catherine Dueck by a few tenths at the halfway point. Farley out-split her the second half of the race, as Dueck finished 2nd with a 2:05.88. Dueck’s swim was another three second drop from her personal best after already setting one in prelims by a second.

Adalynn Biegler, an eighth grader from Monticello, swept the sprint events. She won the 50 free with a new best time of 23.14, well ahead of second-place Jaylyn Storm (23.85). She followed that up with a win in the 100 free, beating Crosby by 0.63 hundredths to win in 51.28. Both of Biegler’s times marked new personal bests, as she dropped about a tenth from her prelims time in the 50 and a half second from her 100.

Katie McCarthy, a Minnesota commit, led the way for Edina as she won two individual events. Her first win came in the 200 IM, where she narrowly beat Wayzata’s Claire Reinke to post a time of 2:03.10. McCarthy out-split Reinke by just over a quarter of a second to overtake her in the final 50. Reinke’s swim was a two second drop from her personal best she set in prelims.

Reinke, who is also a Minnesota commit, later won the 100 fly. She set a personal best time of 53.62 to beat Minnetonka’s Annabelle Wentzel, who finished 2nd in a best time of 53.80.

Edina went 1-2 in the 500, with McCarthy leading the way in a 4:55.46. Edina freshman Frances Muir took second in a new personal best of 4:57.18, well ahead of third place Holly Lenarz (5:00.13). Lenarz dropped about a second from her best time, which she set in prelims the previous day.

Minnetonka’s lone individual event winner, junior Paige Dillon, won the 100 free by a tenth over Lakeville North’s Izzy Satterlee. Dillon, a UNC commit, touched the wall in a new personal best time of 50.86. Satterlee’s swim was also a personal best, as she shaved off about half a second from her prelims time.

Still can’t understand why Visitation doesn’t upgrade to AA. A little competition is good for a team. Probably don’t want the domination to end.