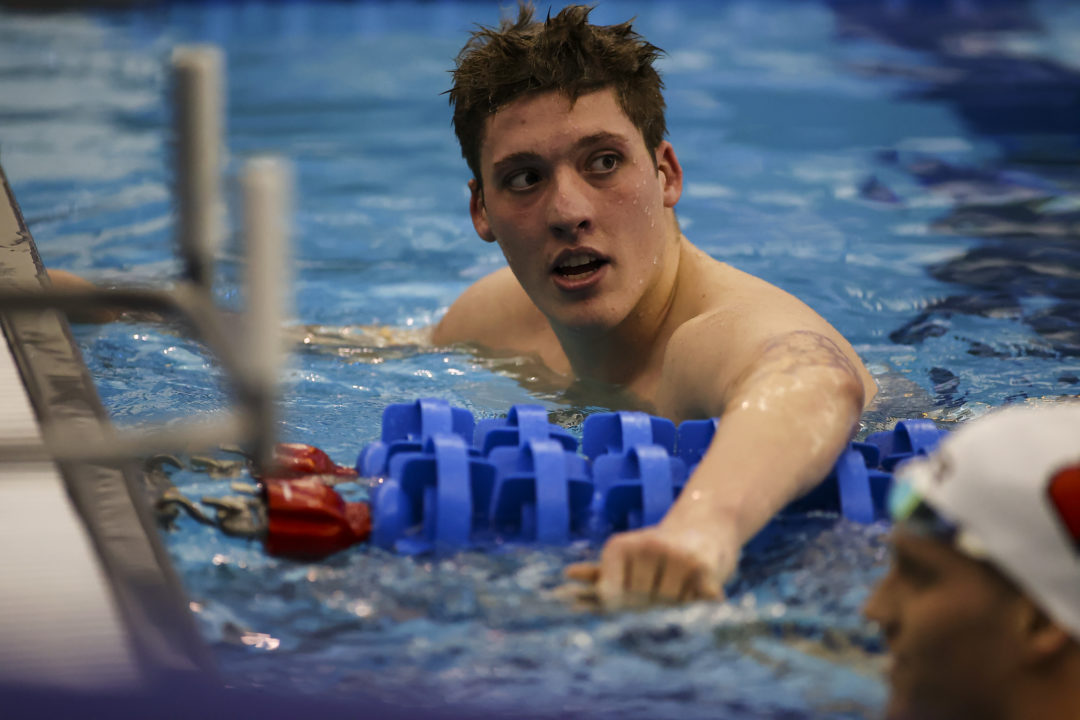 Jack Hoagland, the Most Valuable Swimmer of the 2021 ACC Championships, has been back in training for about 6 weeks and is close to a return to racing. Archive photo via Jaylynn Nash, the ACC

Update: Notre Dame head coach Bob Groseth has clarified that while Hoagland’s return to racing is imminent, the school is finalizing the process of him redshirting the season. Hoagland and others within the program say that a final decision hasn’t been made.

Notre Dame All-American swimmer Jack Hoagland is back in the water training and is targeting a return to competition at the team’s upcoming tri-meet against Princeton and Navy on January 14 and 15.

While he says that plans to race this season, it won’t necessarily be as an official member of the varsity squad, according to Notre Dame interim head coach Bob Groseth.

Groseth tells SwimSwam that the school is in the process of completing redshirt paperwork for Hoagland, which would mean that he wouldn’t use a season of eligibility this year.

“Due to his late start in beginning his training after his injury it seemed not only best for him but gives the next Notre Dame coach a legitimate NCAA contender for the next 3 years,” Groseth said.

Hoagland, meanwhile, says that he hasn’t made a final decision about whether to redshirt or not.

Hoagland hasn’t raced since the U.S. Olympic Trials last June because of a broken wrist (scaphoid) suffered in a scooter crash.

“My recovery was a bit longer than expected, but I am back in the pool training and working on getting back to full strength,” Hoagland told SwimSwam on Thursday. “I’m super excited to get back to competition.”

Hoagland says that he returned to training right after Thanksgiving break, which also means shortly after Notre Dame’s mid-season invite at Ohio State. The team has been on a training trip to Naples, Florida over the last week.

Hoagland was the 2021 ACC Championships MVP after winning the 500 free, 400 IM, and 1650 free. His 96 points were well ahead of teammate Jack Bottelberghe as Notre Dame’s highest individual scorer en route to a 7th-place finish for the men’s team.

As a freshman in 2020, Hoagland went from a relatively unheralded recruit to a distance star, taking 3rd in the 500 free and 2nd in the 400 IM and 2nd in the 1650 free at his inaugural ACC Championships.

Hoagland returned to training under a different coaching staff than when he was injured as a result of departure of their head coach Mike Litzinger and associate head coach Aaron Bell mid-season.

Will Notre Dame not be retaining Groseth?

No. According to the rest of the Notre Dame staff, he’s not actually the interim head coach – he’s just a “consultant.”

Considering he has an extra year of eligibility due to the NCAA Covid decision, does redshirting increase his eligibility another year?

We love cheering on Hoagland! What a star! The team is excited to get him back nice and healthy! Go Irish!