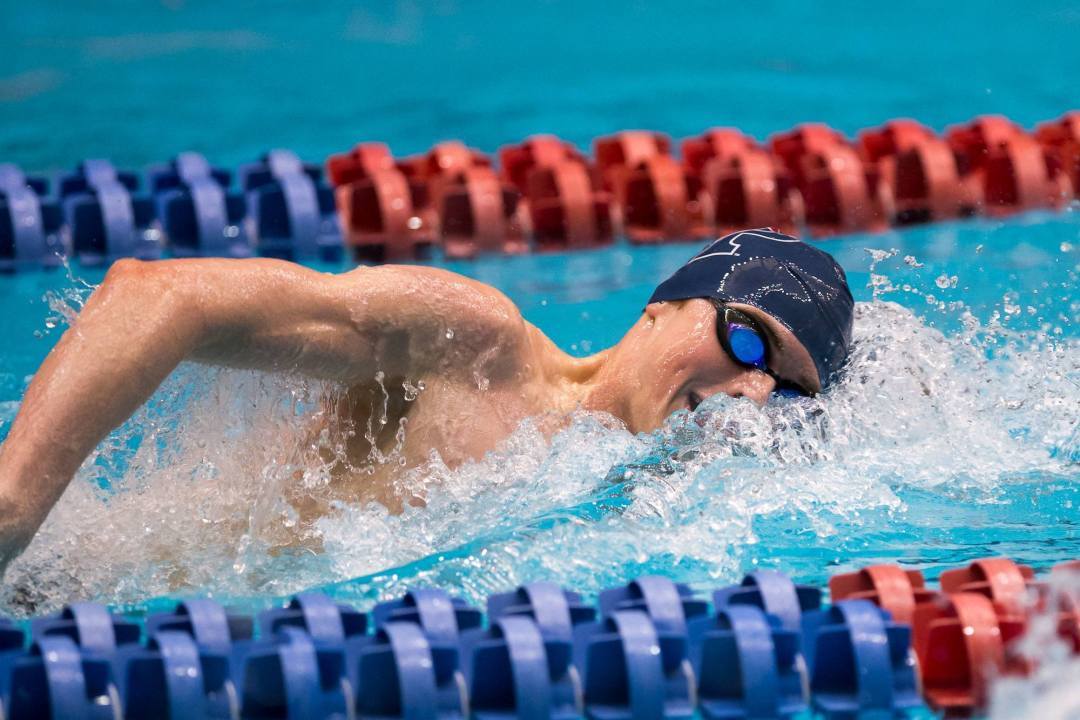 Chris Swanson set an Ivy record to get the session started. Archive photo via Penn Athletics

Harvard got off to a record breaking start as they try to dethrone the Princeton Tigers, who have been the biggest winner in the league since the turn of the century. The Crimson beat Princeton by a touch on the opening relay, setting up a night where they would put more swims in the top heat than any other team. Penn had the best morning of any team outside of the top two, placing six swimmers in championship finals.

Last year, Princeton set a meet and league record to win this relay. However, they lost their fastest split and 50 freestyle individual champion Harrison Wagner to graduation. Both Harvard and Princeton separated from the rest of the field early on. In the end Steven Tan‘s third leg was decisive, giving the Crimson a few tenths, just enough to hold off a hard charging Sandy Bole swimming on the anchor leg for Princeton (19.1).

Princeton is likely wishing that En-Wei Hu-Van Wright had matched his 50 freestyle speed from the morning in this session. The top two teams were both under NCAA “A” times. Harvard’s time was a pool record.

Penn senior Chris Swanson made it three in a row in this event. He finished third his freshmen year. He also broke the Ivy record in this event. That record, by Harvard’s John Cole, had stood since 2001.

Swanson had Yale’s Kei Hyogo on his shoulder for nearly the entire race, just separating for the final 150. This was Yale’s strongest event of the night, with two out of the top three. Harvard followed up their victory with three swimmers in the top eight to outscore all the other squads in the team competition.

Princeton ensured that momentum would swing back their way with a 1-2 finish. Teo D’Alessandro and Marco Bove did enough to stay in the race early on, then separated themselves from top seed Mark Andrew with significantly faster breaststroke legs. D’Alessandro’s victory made it back-to-back wins for the Princeton senior.

Despite Andrew’s fall back from first, Penn was able to put three swimmers in the top eight, as well as getting the ninth place finisher.

En-Wei Hu-Van Wright looked like a sure bet to keep the 50 freestyle title for the Tigers after he swam a couple tenths faster than any swimmer in the preliminaries. Harvard’s Paul O’Hara had other plans, sharing the lead at the turn with teammate Steven Tan and then holding on for victory.

O’Hara has improved immensely from a year ago, where he was just a B-Finalist in this race.

Jayden Pantel, last year’s third place finisher, stepped up to be Columbia’s first event win of the meet. Much like the women’s competition, the two top teams carried several divers and scored all of them with not even 24 divers participating.

A year ago, Princeton set an Ivy record on their way to victory. Although some of the names have changed, they were able to better that time and take the championship and record once again. But whereas in 2015 they were hardly challenged, Harvard swam quite even with them the last three legs. Unfortunately they could not overcome the 1.5 second lead given by En-Wei Hu-Van Wright’s backstroke.

The teams finished the night in a surprising order. Penn sits well ahead of Yale in 3rd place, and if they can hold on to that position, it would match 2014 as their highest-ever finish at a conference meet. Meanwhile Harvard has built a slight lead over defending champion Princeton.

Big surprise losses for Princeton in the 200 free relay and 50 free AND Harvard did not swim Ronda or Manchester (who qualified for nationals in his 100 breast time trial). In the past Princeton’s route to victory was to get ahead Day 1 and have more splashes than Harvard Day 2 to extend it. Looks like a very close contest this year.

Also Penn is significantly ahead of Yale for third place. In fact Yale is closer to Cornell than Penn. Great job by the Penn coaches.

“Penn, who has not beaten Yale in an eternity, sits well ahead of them in third place”