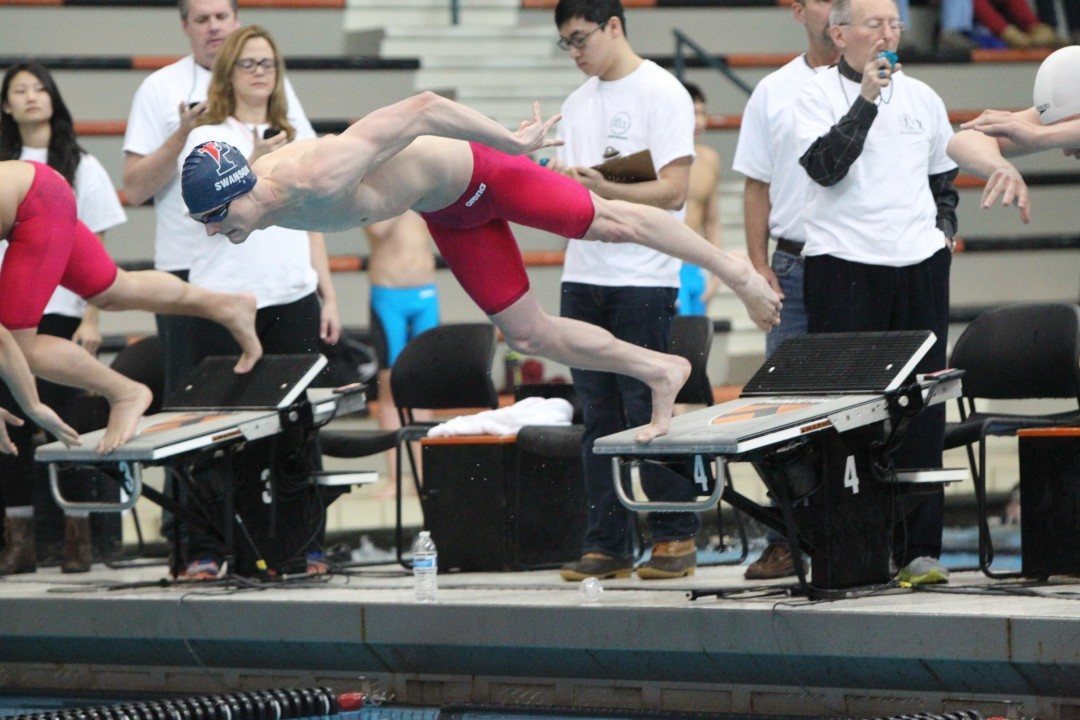 Chris Swanson (pictured) of Penn will be in the 500 free final tonight at DeNunzio Pool in Princeton, New Jersey. Current photo via Noel Valero/valerophoto.com

The morning session of Day One produced some excellent swims at the Ivy League men’s championships at DeNunzio Pool in Princeton. If there have been any surprises so far, it has been Yale’s and Princeton’s ability to sneak extra swimmers into A finals. Brown swimmers outperformed their seedings in every event this morning, as did Yale; Cornell, Columbia and Princeton all exceeded expectations in general.

Here are the A, B, and C finalists out of the first prelims session:

Penn and Yale, the League’s pre-eminent distance programs, dominated the 500 as expected, but Yale placed 3 in the A final to Penn’s 1. Harvard, who had three in the A final and scored 150 points in the 500 last year, placed two in this year, while Princeton also got two. The top time belonged to Yale’s Brian Hogan, with 4:18.75. That’s a lifetime best, and nearly a second faster than what he went at Ivies last year. Freshman teammate Kei Hyogo qualified second with 4:19.09. Top-seeded Chris Swanson of Penn put up a 4:19.64 to qualify third. The rest of the A final will consist of Sam Smiddy (Princeton), Rob Harder (Yale), Spenser Goodman (Harvard), Aly Abdel Khalik (Harvard), and Zachary Ridout (Princeton).

This has always been one of Princeton’s strongest events, and this year was no different. The Tigers had the top four qualifying times, including Connor Maher, who had the third-fastest of the morning (1:45.73) out of the first heat. The top qualifier was teammate Byron Sanborn at 1:45.51. Defending champion Teo D’Alessandro was second with 1:45.60. The fourth Tiger in the championship final is Marco Bove (1:45.89). Christian Yeager of Harvard went 1:45.97 for the fifth-fastest morning swim, followed by Penn’s Michael Wen and Grant Proctor and Andrew Heymann of Yale.

Another event that the Crimson dominated last year was the 50 free, with four in the A final. This time around it Harvard only entered three in the event, and none of them made top eight. Princeton senior Harrison Wagner had the top time with 19.42. Eric Schultz, last year’s winner, went 19.51 for lane 5 honors in the final. Yale’s Aaron Greenberg (19.81) qualified third, followed by Sandy Bole of Princeton (19.96), Columbia’s Alex Ngan (19.97), Ben Schafer of Princeton (20.05), and Victor Zhang of Yale (20.07).

Zach Fisher of Penn and Alexander Lewis of Princeton both qualified eighth with 20.09. Fisher won the swimoff won with 20.04.

Harvard’s Mike Mosca was the top qualifier in 1-meter diving with 355.70 points. He will be joined in finals by Nathan Makarewicz of Princeton (319.65), Jayden Pantel of Columbia (299.95), Michael Manhard and Liam Fitzgerald of Princeton, David Pfeifer of Harvard, Micah Rembrandt of Columbia, and Jonathon Schlafer of Brown.

Tonight there will be two relays (200 free and 400 medley) to add excitement to the team score race.

Yep. tough day for Harvard, solid for Princeton and the rest. Looking forward to the relays tonight and to see if Harvard bounces back.

• It’s over — Princeton wins 1st place. And it will not be close. Incredibly, Princeton will outscore Harvard even in diving!
• I think Harvard will still take 2nd, but it won’t be easy. Penn and Yale are swimming really well. This is going to be very exciting.
• Columbia will be 5th. I think Columbia will score more points than last year, due to strong diving and improved relays. They had the least number of splashes on the first day and Jakl did not swim yet. Their problem, however, is that Penn and Yale will also score more than last year (taking points from Harvard).
• Cornell and Brown are in a tight battle for the 6th.