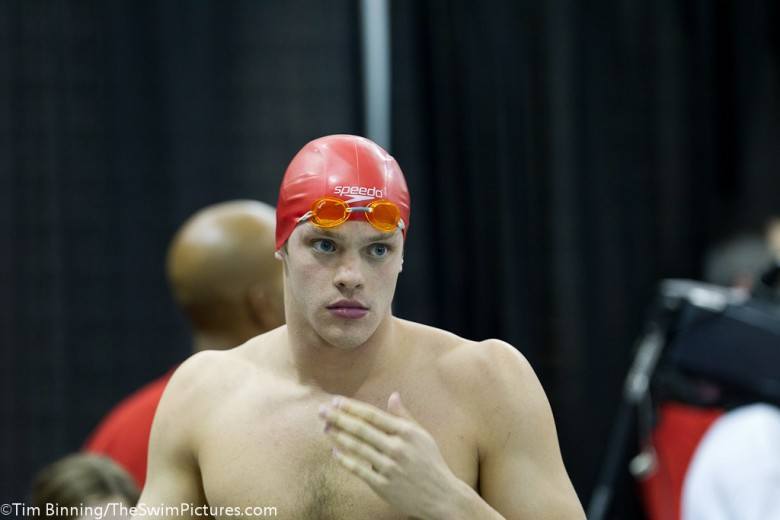 Photo Courtesy: Tim Binning/TheSwimPictures.com. Eric Ress is back after redshirting last season. What kind of performance will we see from him?

While we have a break in the action of the women’s meet, let’s look at the backstrokes on the men’s side…

All eight 100 back A-Finalists from last year are swimming at this year’s NCAA’s, but a pair of them aren’t entered in this event.  A big story in examining the field is the absence of Cole Cragin, who failed to qualify in an individual event this year for Texas.  That throws a wrench in the field and is a big blow for the Longhorns; Cragin was 3rd in 2011 and 2012 in this event.  The other missing swimmer is Marcin Tarczynski of Cal, who has jumped back to the 100 fly after finishing 5th last year in the backstroke.

Potential replacements for those two in the A-Final could be Eric Ress of Indiana and Tony Cox from Cal, who each sat out last season.  Both were top 8 in 2011 (Ress was 2nd, Cox was 7th while competing for Auburn), and should contend once again in 2013.  Two year ago, Ress was seeded 1st going into NCAA’s at 45.11, and was right around that time in finals (45.14).  He’s a little more under the radar this year (seeded 10th), and it’s hard to know what to expect; he was the only one of the Indiana’s big guns that wasn’t on fire at Big Ten’s.  Was he saving up, or has he taken a step back?  We’re banking on the former.

Ress’s teammate James Wells is the top seed, but he has really underperformed at this meet the last two years.  He’s a much better swimmer overall this year, and we think that will be enough to get him into the A-Final.  Cox has already proven to be a huge addition for Cal, and looks like their go-to sprint backstroker next weekend (although freshman Jacob Pebley could see some swims).  Getting a second swimmer into the top 8 is critical for the Bears to build momentum headed into day three.

Also returning are the top two finishers from last year: Tom Shields and David Nolan.  Shields is the two-time defending NCAA champion, and is looking for the first three-peat in this event since Peter Marshall of Stanford won three straight from 2002-2004.  Nolan looked decent at PAC-12’s, but you could tell the front-end speed wasn’t quite there.  That’s typically one of the last things to come with taper, and we expect David to break the 45-barrier.  The only question is whether he or Shields will be faster.

Shaping up the rest of the A-Final should be a pair of familiar faces to go with a couple of new names. Kyle Owens of Auburn and Mitchell Friedemann of Arizona are no strangers to the 100 back final, each making the A heat the last two seasons.  Junior Sam Rairden of Tennessee burst onto the scene at SEC’s, swimming lights-out across the board, including a 2nd place finish to Owens in this event.  Yes, coaching men and women at the collegiate level is very different, but the way coach Matt Kredich has the Lady Vols swimming so far this week, expect Rairden to rise to the occasion once again.

Even though he’s a superb 100 guy, this is probably Eric Ress’ better event.  He had an epic battle against Cory Chitwood two years ago, coming up just short against the Arizona star over the final 50 yards.  With Chitwood gone, Ress still has to fend off a deep field, including Cal freshman Jacob Pebley, and a trio of Stanford swimmers who finished 2-3-4 a year ago (Nolan, and senior two-headed monster [thanks, Braden] Matthew Swanston and Matt Thompson).  Straight-up, I think Nolan can win this race, but NCAA’s is as grueling of a three-day meet as it gets.  Nolan will have 5-6 more swims under his belt than Pebley at this point, and he has to shoulder a heavier burden (pressure, team expectations, etc) than Ress over the three-day span.

Swanston and Thompson each finished in the top 5 in 2011 and 2012, and are in great position following PAC-12’s (where they were far from their best).  Neither really has to pull relay duty next week (apart from maybe Swanston swimming prelims of the 400 medley), and this is the event they gear up for most.

We like the odds of two other returning A-Finalists, Alex Lendrum of USC (6th last year) and Jacob Hanson of Eastern Michigan (7th).  Lendrum’s seedtime (1:42.29) from this fall secured him a spot at NCAA’s early in the year, and it didn’t look like he was 6th gear at PAC-12’s.  He’s been under 1:41 before (1:40.82 last season), and his slower seed sets him up well.  Hanson swam under his seedtime at NCAA’s last season, and is returning this year a whole second faster.

Darkhorses: Jacob Jarzen, Michigan State.  Jarzen opted against this event last year, but overall he had a very good NCAA’s (including B-Final performances in the 200 back and 100 fly).  The Spartan senior has continued to improve every year, and he’ll look to double up in the 100 fly-100 back double on day two.  Also, don’t lose track of Matthew Swanston or Kip Darmody.  Both are way down the psych sheet, but have scored well in this event in the past and have strong NCAA histories.

With Stanford having three swimmers in good position to return to the A-Final (and a 4th qualifier in Will Gunderson), I’ve been having visions the 200 back could go like this…

But here are the actual predictions…

Darkhorses: It’s hard to call Austin Surhoff a darkhorse, but he’s seeded all the way down at 34.  He didn’t have a great swim in this event last year, but he was in the top 8 in 2011.  If he returns to form, he can sneak into the top 8.  EDIT: Marcin Tarczynski, Kip Darmody, and Friedemann are also way down the psych sheet and  deserve a shout out.  Crazy field this year.

Hey, if he matches his time and I’m wrong, that’s awesome and more power to him (seriously). The more fast swimming we have at NCAA’s the better. But you know what we’re going to see: >50% of people adding time, a lot of those being guys who had breakout conference meets (like Teduits).

Seeded at 1:39 it seems like he’d have to add quite a bit of time….especially since everyones gonna be going slower!
http://www.youtube.com/watch?v=sd9OW4sAlIE

Hanson could be slower, but he had a great swim in this event last year. Owens is the only one I’m concerned about. In reality, maybe I probably should have tossed Tarczynski, Surhoff, Darmody, or Teduits in the 8th spot. But that’s what makes this fun, yeah?