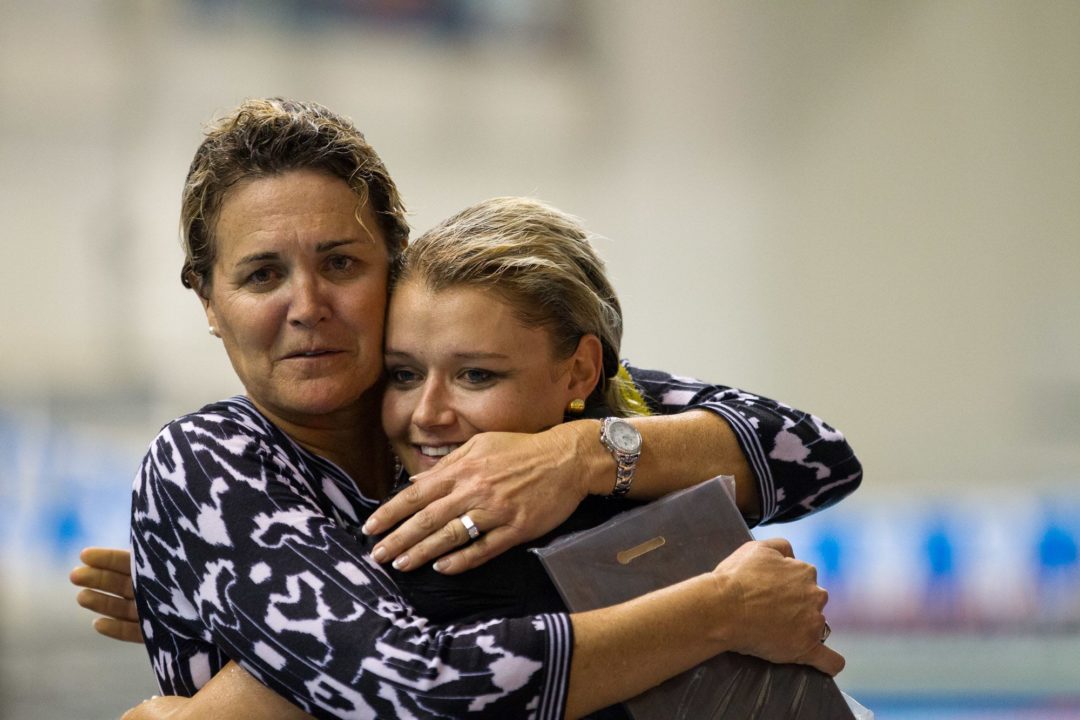 Teri McKeever was an easy choice for Coach of the Year. Some of the other selections were much more difficult.

It’s time to hand out our first annual Swammie awards for the women’s NCAA Championships. These awards will be given out after big meets when we think they’re worthy, and will represent the best of the best.

This year’s NCAA Championship, with 7 NCAA Records broken, had no derth of contenders for these awards, but despite a slew of worthy candidates, I feel comfortable with who we’ve given them to.

Women’s Swimmer of the Year – Caitlin Leverenz, Jr., Cal
Do we even need to repeat her accomplishments? NCAA and American Records in the 200 IM, an American Record in the 400 IM, nearly an NCAA and American Record in the 200 breaststroke (off by .01), a part of two NCAA Record-setting medley relays, and a second-straight National Championship. She tied with Katinka Hosszu for the highest-scoring swimmer at the meet, but the relay records break that tie.
Honorable Mentions – Katinka Hosszu, USC; Megan Romano, Georgia; Margo Geer, Arizona; Liv Jensen, Cal; Cindy Tran, Cal

Women’s Freshman of the Year – Amber McDermott, Georgia – McDermott wins this award as much for her accomplishments at NCAA’s (where she was by far the top-scoring freshman, and a huge relay piece) as she does for the entire body of work this season. She had one of the fastest freshman distance years that we may have seen in the last 20 years. With a few more years under Jack Bauerle, she could be one of the great ones.
Honorable Mentions – Emma Reaney, Notre Dame; Aja van Hout, Wisconsin; Melanie Klaren, Cal; Ellen Williamson, Virginia

Women’s Best Supporting Swimmer of the Meet – Caroline McElhany, So., Texas A&M – Overshadowed by fellow sophomores Cammile Adams and Breeja Larson, McElhany lurked in the shadows to be maybe the MVP of this meet for the Aggies. She made all three individual finals (including 6th in the 200 fly), and stepped in for a very important 200 medley relay final when teammate Tess Simpson got sick.
Honorable Mentions – Sarah Denninghoff, Arizona;

Breakout Swimmer of the Meet – Emma Reaney, Fr., Notre Dame – There were only two freshmen at this meet who scored in all three of their individual events. One was Georgia’s Amber McDermott, who was the top recruit in the class and the Freshman of the Year. The other was Reaney, who wasn’t even the top recruit on her team and number 96 in the country per collegeswimming.com. Freshmen don’t usually get “breakout” awards, but we’ll make an exception in this case because of how far she’s come in her first year.
Honorable Mentions – Shannon Landgrebe, Arizona St; Stephanie Peacock, UNC; Shelley Harper, Cal

Coach of the Year – Teri McKeever, Cal – Time after time, McKeever proves why she’s the best college coach in women’s swimming. Not only do her swimmers improve and perform when it counts, but her tactical decisions are brilliant. Turning Liv Jensen, the NCAA 50 Champion, into a 200 freestyler; then leaving her off of the 400 medley, then that 400 medley breaks an NCAA Record anyways. Letting Cindy Tran swim the 100 fly B-Final, and trusting that she’ll have enough on her 3rd swim to still win the 100 back. Even as far as having the foresight to hire an outstanding diving coach to develop a part of the program that will ensure the team’s success for years to come. For the 2nd-straight year, she turned everything she touched into gold.
Honorable Mentions: Dave Salo, USC; Steve Bultman, Texas A&M; Matt Kredich, Tennessee; Dorsey Tierney-Walker, Arizona State; Ned Skinner, Virginia Tech; Jack Bauerle, Georgia; the Ivy League coaches collectively

Now is also a good time to look back and see how our pre-meet predictions went for the top 10. We missed Cal, yet again. If I try to pick anyone other than Cal to win next year’s title, somebody please stop me.

Other than that, we weren’t off too badly. We had Texas and Florida flipped, though that would have been a whole lot tighter without the Eilzabeth Beisel DQ in the 200 IM (who would have picked that). A&M moved ahead of the Auburn/Tennessee tie. The worst miss was reversing the 3-5 positions.

Overall, an average performance in the picks, but everyone was in the right general range. With the exception of Arizona State really performing well and sliding a lot of teams down a spot, we were much better in the 11+ predictions.

10. Florida, 160 (our pick: Texas) – That Beisel DQ really cost the Gators early in this meet, as did a few under-swims by Teresa Crippen in her difficult Day 3 double, which she handled much better last year. Sara Bateman did swim well and broke a few school records, but even she wasn’t enough to lift that 200 medley into scoring position. She graduates, but a big group of freshman sprinters next year will help this team out bigtime.

9. Texas, 201 (our pick: Florida) – This was a really up-and-down meet for the Longhorns. Karlee Bispo swam extremely well in her final college meet, as did the rest of the Longhorn sprinters (leading to some fantastic relay finishes) Kelsey Amundsen looks ready to take over that role as the relay-rock next season. But there was a big blowup in Austin after their Big 12 performance, and the distance group didn’t react well. Kaitlin Pawlowicz was awesome early this year, but had faster dual meet swims than NCAA swims. Leah Gingirch had a heart-breaking end to her career. As Duke basketball coach Mike Krzyzewki said after his team’s loss the other day, sport will take you to incredible highs, and incredible lows. The Longhorns had both in this meet.

T-7. Tennessee, 249 (our pick: Tennessee) – Nailed this one on the dot. The swimmers performed fairly well, with a few ups and downs as is normal at these meets. The divers didn’t quite hit their marks, but still earned some valuable points for the Volunteers. This is a real turning-point meet for the Volunteers.

T-7 Auburn, 249 (our pick: A&M) – The “our pick” part is a bit odd with the tie, but Auburn slid a slot in the standings. They really performed right on par. Vanderpool-Wallace lost a few points in her 50 free, but finished with the 100 free National Title. Olivia Scott swam very well, as did the Tigers’ breaststrokers. They didn’t so much as slide from 6th-to-7th as much as the 6th-place Aggies wrestled it away.

6. Texas A&M, 262 (our pick: Auburn) – A&M’s divers were in the lower range of their potential (a missed diver here-and-there was enough to cost them) but the NCAA’s Diver of the Meet Jaele Patrick still was a star. That helped A&M move way up from seedings, though they got off to a bit of a rough start on the first day. Adams missed scoring in her first event the 500 free, but made two A-Finals thereafter. Their medleys weren’t able to swim as well in evenings as they were in the mornings, which also hurt. The program did get their first ever NCAA Record, though, from Larson’s 100 breast; as well as two National Titles. They didn’t score in either the 400 or 800 free relays, the 50, 100, or 200 freestyles, and still had their second-highest finish ever.

5. Arizona, 299 (our pick: USC) – Arizona got good diving from Sam Pickens. They had great relays, and a solid meet-strategy coaching job from Eric Hansen. While their relay swims were very good (especially Margo Geer), they missed some opportunities in individual swims. This is still a very young team, and next season they’ll be better adapted to Hansen, and should fly.

4. Stanford (our pick: Stanford) – This was an overall great team performance from a Cardinal team without any superstars. Maya DiRado probably outperformed even lofty expectations, including a National Age Group Record in the 400 IM. Even as 400 free relay splits in the 46-range become not-so-rare, stanford won that relay and set an American Record with no better than a 47.2.

3. USC (our pick: Arizona) – This USC team was arguably less-talented at the top-end than last year’s team. Kasey Carlson didn’t have a great meet. And still, they finished in the same third-place as they did last season. Dave Salo, who is still relatively new to the college scene, is really hitting his stride with the Trojans. He’s developing good depth, hitting his mark with recruiting, and his tapers have been excellent. This is a big outperform for USC.

2. Georgia (our pick: Cal) – There’s nothing for Georgia to hang their heads about this year. They were a very young team, and 2nd place is higher than I expected at the beginning of the year. Megan Romano turned herself into an Olympic candidate in this meet, McDermott was spectacular as well. They just didn’t show up quite enough times at the spots they really needed to at this year’s meet. But overall, they as a team had good swims.

1. Cal (our pick: Georgia) – And the Cal Golden Bears thoroughly dominated this meet to the point where even a DQ’ed relay wouldn’t have kept them for the victory. The turning point for this team was early on day 1. When Caitlin Leverenz and Liv Jensen won the 200 IM and 50 free (hotly-contested races that they could’ve easily been 4th or 5th in), it set a tone for this meet. They didn’t win every single winnable-race, but they sure did take a whole lot of them. Their relays are just too good – even the ones that weren’t seeded well still had top 4 finishes (400 free relay).

And now, we dive head-first into the men’s meet.

“The Swammies”, I love it! You guys could really takes these awards somwhere over time. I am imagining the coveted Swammie trophies that will adorn future winners trophy cases. How about an annual award show- “The Best of the Swammies”. Sorry, sometimes I get carried away.

I like where your head is at BigGuy! I bet we can come up with some cheesy graphics and some sort of awesome trophy that we can spray-paint gold…

My thoughts exactly……go for it!