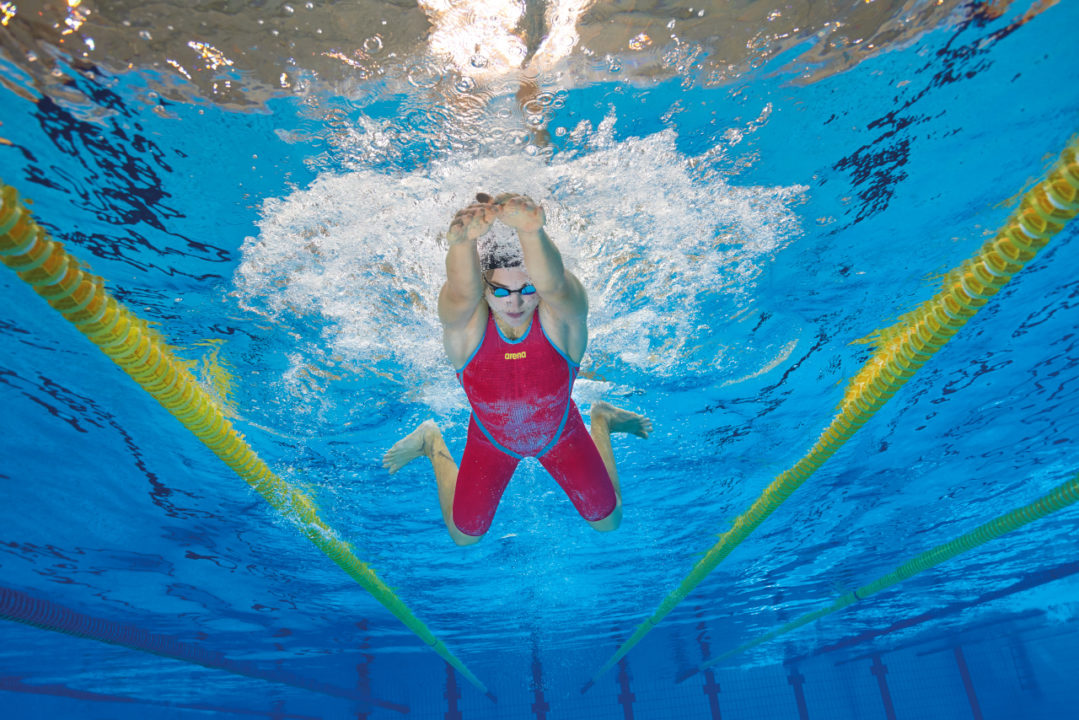 While she has not yet committed to racing at next May's World Championships, Ruta Meilutyte is making a first step by taking a training camp with the Lithuanian National Team. Archive photo via Arena

Lithuanian swimmer Ruta Meilutyte has joined her country’s National Team on a training trip in Tenerife with a goal to decide about attendance at the World Championships next May.

Emilis Vaitkaitis, Secretary-General of the Lithuanian Swimming Federation, confirmed Meilutyte’s plans to lrytas.lt. He says that after the Lithuanian Championship, they decided what to do next, and decided to take her training a little more seriously. This will be her first attempt to join the National Team.

The camp will include many of the country’s best swimmers in the Canary Islands from Friday until February 14. The Lithuanians aren’t the only swimmers in Tenerife to escape the European winter – Olympic champion Katinka Hosszu is in camp there as well.

Meilutyte retired from swimming in 2019 at the age of 22 after being suspended for missing doping tests. Meilutyte said that she was battling severe depression that was driven in part by the pressure to continue her success after the 2012 Olympics.

Vaitkaitis says that Meilutyte is currently considering joining the team for the World Championships, but that at this point the goal is to integrate her into the team and make a first step.

Meilutyte has been dealing with health problems, including a bout with the coronavirus, but that will not interfere with her trip to the camp.

In December, Meilutyte, now 24 years old, made a surprise return to the pool at the Lithuanian Short Course Championships. There she swam 1:05.23 in the 100 breaststroke and set a new Lithuanian Record in the 50 freestyle in 24.32.

At the time, she was training with the Plymouth Leander Swim Club in the UK under Jon Rudd, who has gone on to lead a resurgence in Irish swimming. Shortly before her break, and subsequent retirement, from swimming, she went to train with Dave Salo in the United States, who has trained many of the top American female breaststroke of the last 15 years.

There is still time to put her in the 100 best prospect for 2022 list. I really hope she makes a come back.

Keep forgetting she could possibly enter the prime of her career over this “quad” would love to see that potentially happen if she’s enjoying the sport again.

The mental math I did to realize how young she was in London while reading this, phew.