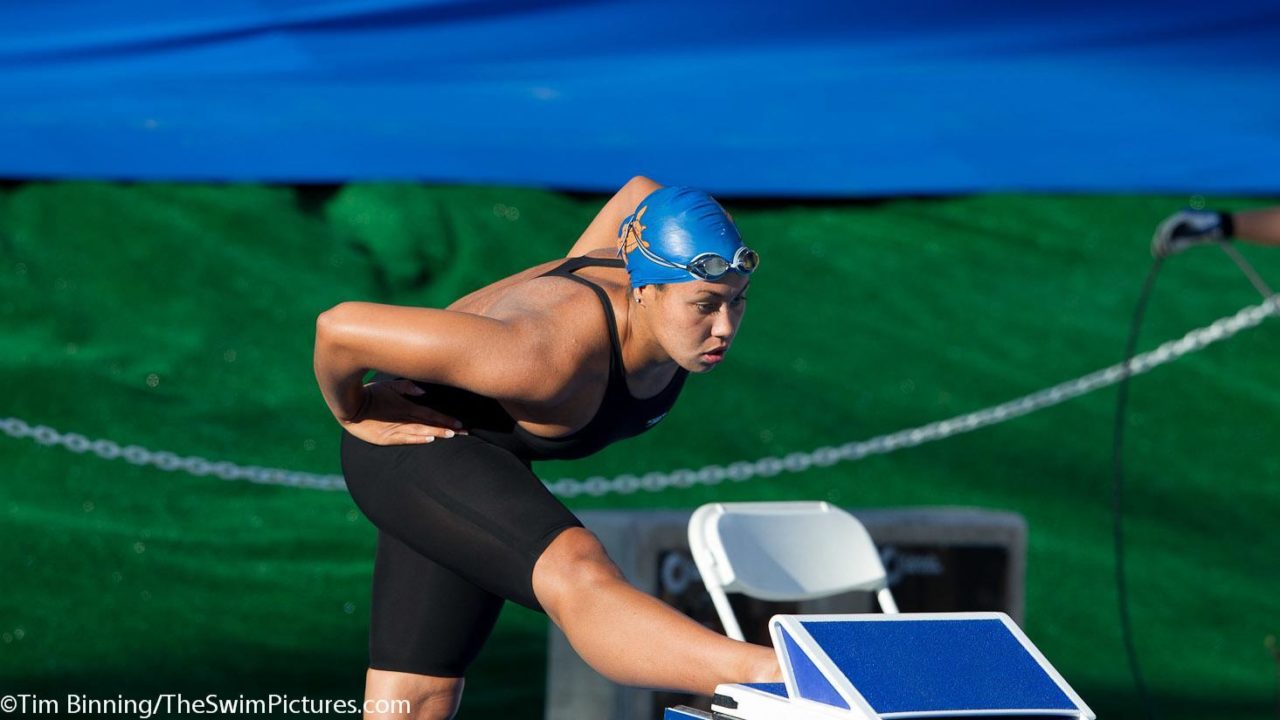 Chelsea Chenault and the record-break Carondelet Girls Will be looking to take a Section Title this year.

Friday, May 17th, will begin the last of the big California High School Section Championships – the North Coast Sectional – at the Concord Community Pool; finals will be held on Saturday May 18th.

The meet will feature a matchup of the sections two powerhouse girls’ programs – Carondelet and San Ramon Valley – in a quest for the title. Carondelet has the biggest names, as their lineup includes the early UCLA commit Madison White and Chelsea Chenault, both juniors. Chenault will again be chasing the National Independent High School Record in the 200 free that she set last year in 1:45.12, though Missy Franklin has since taken it from her; but similarly to what we saw with Jasmine Tosky in the Central Coast meet, she’s got Olympic aspirations and might not be fully tapered for this meet.

They will be joined by teammate Christina Ray, who was 6th in the 100 fly at last year’s meet. By tagging on Madeleine Benevidez as a replacement breaststroker for the graduated Allison Gargakalis, they still have a chance at their own 200 Medley National Record set last year.

But last year’s champions were Sam Ramon, who used amazing depth to overcome the records of Carondelet. They do have a star of their own, however, in senior Allison Brown. The Stanford commit was 2nd in the 200 IM and 3rd in the 500 free at last year’s state meet. That 500 free could be the race of the weekend (depending on the level of Chenault’s preparation) as the two will go head-to-head in the aftermath of Catherine Breed’s graduation.

Her backup will be Marissa Neel, the top-seeded 100 butterflier in the state as a senior, and Heidi Poppe, who was runner-up at last year’s meet in the 100 breaststroke with a 1:03.27 as just a freshman. This 200 medley battle between the two will set a huge tone early-on for the team title.

There will be some other outstanding girls at this meet, including Celina Li (200 IM/100 fly) from Foothill High School (she and Neel will have a great duel in the 100 fly).

On the boys’ side, Campolindo will be looking for their 8th-straight title, and they should get off to a great start thanks to Steven Stumph in the boys’ 200 IM. The defending Champion and Section Record holder has already been faster (1:49.35) than his record (1:49.46) this season, and will be looking to attack it further in Concord.

Among other big scorers for Campolindo will be defending 100 back champion Sven Campbell (who set a Section Record in 49.73 as a sophomore last season). Campolindo also has some outstanding relays – Campbell will return with Robert Ashby and Tor Jensen to defend their title in the 400 free relay (a 3:03.97 from last year!).

This year’s boys’ meet will be the rollover of what was an incredibly young, though still very fast, meet in 2011. That starts with Granada sophomore Nick Silverthorn, who last year broke the Section record in the 200 free in only his first season with an incredible 1:37.83. This year, he will be trying to take down John Dorr’s 2001 record in the 500 free as well. He’s not on a ton of radars outside of the west coast, but he will be after this weekend.

He’ll get a good push in the 200 from Jackson Miller out of Las Lomas High, who was a decent 1:40 200 freestyler as a sophomore, but really bloomed this season and has already been a 1:36.70.

Junior Charlie Wiser will also be looking to break his own record and defend his title in the 100 breast, where last year he was a 55.27 as only a sophomore.

And for those who like the sprints, De la Salle junior David Morgan will be back to defend his 100 free title (won last year by .04 over the aforementioned Campbell). This year, he’s added the 50 to his lineup as well, dropping the 100 back, and has already been a 20.64 this season.

This boys’ meet was a record-crushing affair in 2011; and with a huge majority of those record-breakers returning this season, there’s no reason to think that will change in 2012.

After a good investigation I have found that Ian Crocker has swum in the special “fastest man in Texas” all-star event in yards last December with other big names like Jimmy Feigen, Garrett Weber-Gale, Brendan Hansen or Aaron Peirsol. His times were 20.2 in the 50 free and 21.4 in the 50 fly. Since then I have nothing new.

Yep good call bobo – that was a race to raise money for Josh Davis’ mom’s cancer, if I recall. Still had some speed…

Speaking of Crocker… Braden or Mel, would you happen to know if he is swimming at trials? I had heard he may attempt a comeback, but haven’t heard anything in a couple of months…

More comebacks? Who else? It’s great to see them just try to swim again…

He’s in the testing pool as of the 4th quarter of 2011 (they’ve gotten really slow at updating it), but I talked to a writer at SI who said that he denied it. 8 tests in 3 months says he’s planning something though. No Masters meets yet either that I can find…

Chelsea Chenault is one of the best young american swimmers on the women’s side in the 200 free and in the 400 free. She had impressed me two years ago in long course but since then she hasn’t much improved. Ok every young swimmer hasn’t the fast progression of Missy Franklin or Katie Ledecky but the last time I have watched her on a webcast I think she was a little fat and didn’t look in a very great shape. Perhaps it’s an explication. Or it’s her natural body and there isn’t problem. Ian Crocker is a little chubby too and has made a fantastic career.

Easy with the criticism of Chenault and her physique… That comment was a little harsh. She swam great today.

You are very nice. Thank you. Seriously my comment wasn’t nasty. I only asked a question about her shape. And she has really answered. She has a natural powerful body. And she’s a very beautiful girl. So it’s unnecessary to be agressive. Some of you are very thin-skinned. Chelsea Chenault has a bright future and I wish her all the best.

It would be cool if someone put together a mythical California High School championships after all this, so we could see how all of the top times from each section lined up.

Oooh good call. I’ll see what I can do. If I can get the times into Excel…wouldn’t be too tough.