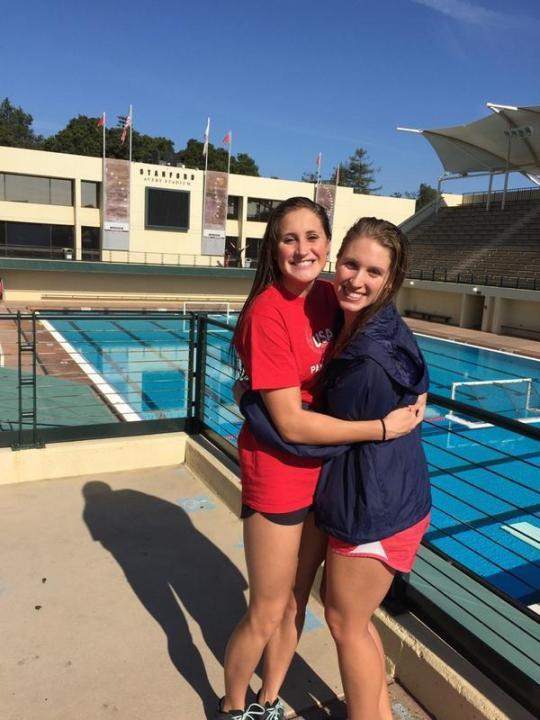 Leah Stevens is the newest member of Stanford’s recruiting class of 2015.

The Stanford Cardinal have put a big exclamation point on an already stacked women’s recruiting class of 2015 when Leah Stevens verbally committed on Wednesday. Stevens, who trains with the Lakeside Swim Team, is ranked as the #19 swimmer in the class of 2015.

She’s another immediate impact swimmer with NCAA scoring potential already for this Stanford class. In yards, her bests are:

Stevens’ best time in the mile would’ve put her 15th at last year’s NCAA Championships meet, and her best times in several other events (500 free, 400 IM) would’ve left her just outside of the points as well.

As a member of the USA Swimming Junior National Team in the 800 free, 200 IM, and 400 IM, Stevens is a well-known quantity in the distance free and IM races. An area where she’s really underrated, though, is in her breaststroke abilities. She dropped four-and-a-half seconds in the 100 yard breast, for example, during her junior season alone. Her IM times in yards probably aren’t quite as good as what she’s shown to be capable of in meters either (2:15.26/4:46.21 in the 200 and 400 meter races, respectively).

Stevens swam on the American team at the 2014 Junior Pan Pac Championships in Hawaii this summer where she was 9th in the 200 IM, 10th in the 200 breaststroke, and was in position to medal in the 400 IM before being DQ’ed in finals (she was third-fastest and a lifetime best in prelims).

At the 2014 Kentucky High School State Championship meet, Stevens won both the 200 and 500 yard freestyles and was a part of Sacred Heart Academy’s winning 200 and 400 yard free relays.

Other top-2o recruits in Stanford’s class include #1 Katie Ledecky and #6 Ella Eastin, in addition to other highly touted swimmers like Kim Williams and Kaitlyn Albertoli.

So many of the top programs are going to be scary in the years to come. Can’t wait for NCAA’s.

Just a slight correction: Leah Stevens is on the right and Kim Williams is on the left. Congrats Leah! Go Card!

Best news ever today! This makes me so happy!
Best class of 2015 (by miles) got even more DOMINANT!

Welcome Leah to the family!
You’re going to enjoy championship rings for the next 4 years!

One more to go!

Swimswam is a great swim site.
But I have to disagree about your no. 19 ranking for Ms Stevens.

Anyway congratulations to Leah once again! So happy for you and the team!

SWIMNERD – I’ll accept an argument for higher than 19 if you can make a good one…but there’s no planet on which she’s ranked higher than Kathleen Baker, Katie Ledecky, Katie McLaughlin, etc.

You’re going to have to come up with a better justification than the collegeswimming.com rankings to convince me.

Swimnerd is a willful provocateur. I suggest that we not take the bait.