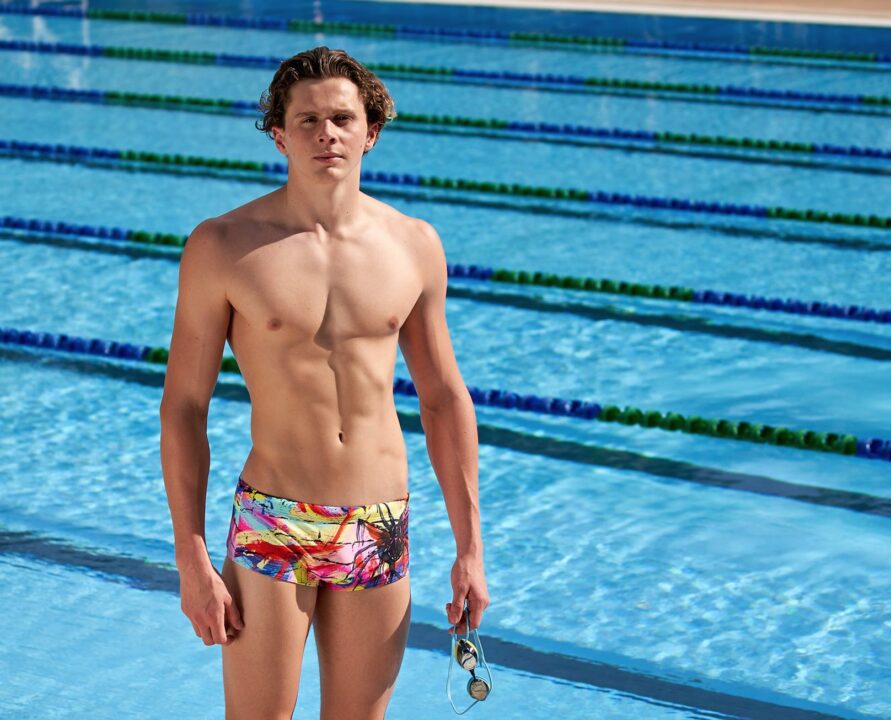 Topping the men's 50m backstroke podium this morning at the 2021 Sydney Open, 17-year-old Isaac Cooper rocked the fastest time of his career in 24.69. Stock photo via Funky Trunks

Topping the men’s 50m backstroke podium this morning at the 2021 Sydney Open, 17-year-old Isaac Cooper rocked the fastest time of his career in 24.69. That not only edged out visiting New Zealander Andrew Jeffcoat, who touched in 25.05, but the outing overtook Cooper’s previous personal best of 25.27 from just last December.

Cooper, at just 17, has now become Australia’s 3rd fastest 50m backstroke of all-time, sitting only behind national record holder Ben Treffers and Mitch Larkin, who own the top times of 24.54 and 24.62, respectively. Prior to this morning’s swim, Cooper’s 25.27 ranked him as Australia’s 11th fastest performer today.

However, with Cooper’s 24.69 outing this morning, the teen now becomes just the 8th Aussie ever to dip under the 25-second barrier in the event.

The Queenslander now ranks 4th in the world with his big-time swim, with additional events on the schedule for this meet that runs through Sunday.

Yep from age champs this year.

anyone know whatever happened to Mitch Larkin and the rest of the St Peters Western team? they entered events but have scratched from the heats like Elijah Winnington and Jack Cartwright, so some big names missing last minute, is it Covid related I wonder

Think they are on a training camp

Too risky to travel to Sydney & be caught by ONE Covid positive test & unable to return .

There was a bit of a Covid scare in NSW so rather than risk going into quarantine if cases worsened the SPW team took the safe route and stayed put in sunny Queensland.

There have been zero cases since the husband and wife .. if they’re that precious then their chances aren’t very good in Tokyo .. have you seen the Covid numbers there ?

Not the same at all. Their concern is interrupted training because of quarantine not necessarily covid.

Your reply doesn’t make sense sorry .. they need to toughen up and live with Covid around them.. they’re not gonna be Olympic champions if they’re soft

His previous best was 24.92 from age champs this year.

Is this a new Aussie age group record?

Not sure but I would expect so if they kept track of it. The doc I found for Australian swimming had no 50 bk

It’s included in the age rankings which should’ve already had him at #1 with his 24.92 but isn’t up to date.

Anyone know if FiNA does stroke 50’s for the WJR’s?

Thanks for confirming that. Wasn’t sure if it was held by someone or still that silly « calculated WJR »

Fairly sure he went 24.9 at Nationals in April

5
0
Reply
Troyy
Reply to  its ya buoy

Holy sh**, why is everyone going so fast today? Especially a freaking 17 year old