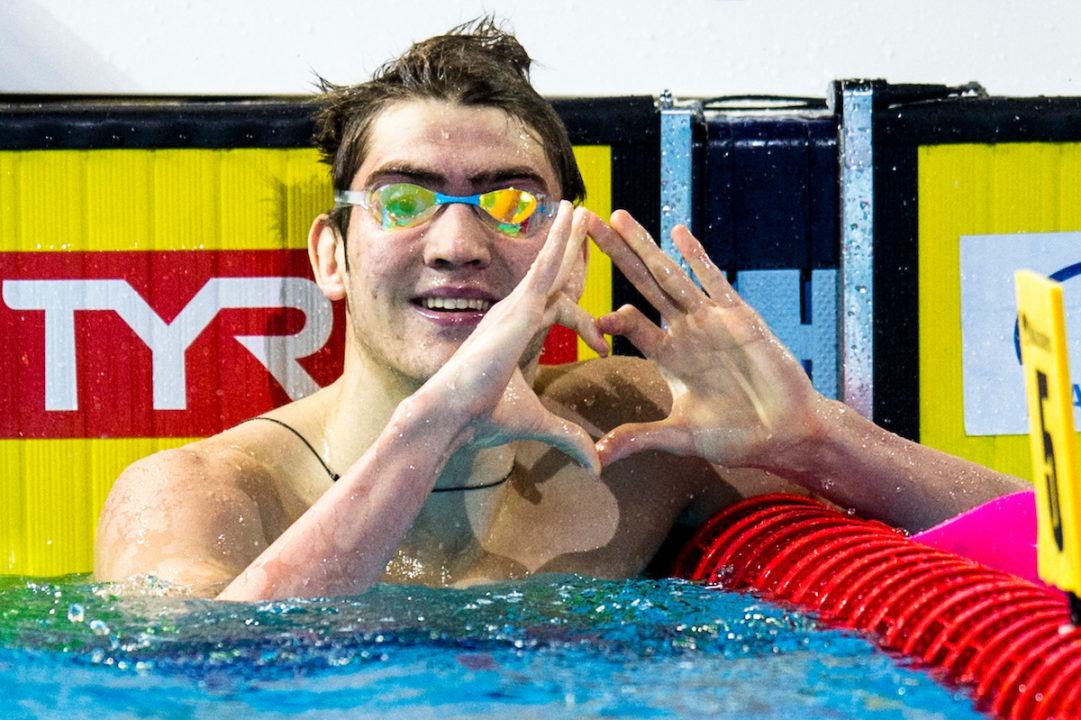 After just missing the record last week, Kliment Kolesnikov got it on Friday in St. Petersburg. Archive photo via Mike Lewis/Ola Vista Photography

Kolesnikov dropped .09 seconds from his swim at the European Short Course Championships exatly a week ago, and has undercut the World Junior record in this event 5 times in the last 5 weeks.

Other records broken by Kolesnikov’s swim:

This kid is insane.

Russia Youngster are becoming a team who can actually beat US in next World.

If a 4×200 Medley relay existed a Rylov/Chupkov/Pakhomovo/Krasnykh team would be scary too..

If the Russians start challenging for the gold in the medley relay, that will really makes some waves.

I agree – Russia look insanely good. I just don’t see where they make time over the US…

Is Kolesnikov going to be ahead of Murphy at his best? Possibly, but equally possibly not, and he will not be far ahead in any case.

Is Prigoda/Chupkov going to be ahead of Cordes? Again, possibly, but almost certainly not by much and quite feasibly not ahead at all.

Are Kuimov/Minakov going to be ahead of Dressed? In my opinion, no. Will they be close? Possibly, but they have a long way to go.

Will Girev/Morozov be miles ahead of ‘whoever anchors the USA? Post Adrian, very possibly, but not by much, USA seem to always have a man who… Read more »

1) Hi Rafael, I see that my hint about Russian men’s medley relay is making waves..

2) Dee: the real strenght of Russia is the date of birth of their swimmers: Rylov (1996), Kolesnikov (2000), Chupkov (1997), Prigoda (1995), Kuimov (1999), Minakov (2002!), Girev (2000). It’s the ratio performances already obtained/age of swimmers to be extremely impressive. And most of them could peak for 2020.
Obviously Usa has historically been capable to produce great swimmers (the winning streak in the medley relay speak for itself) and there are high chances that will happen again for Tokyo2020.
But Russia could be a powerful competitor.

I would not define a Ceiling for Rylov/Kolesnikov so soon, the latter might push a Peaty.. On Fly Minakov is scary being only 15.. And I Think the next Peaty level guys will show up soon, Kolesnikov, Peaty Himself, on Fly Dressel is showing that already but I would not be surprised if Milak/Minakov takes the “Peaty title” on 100 free the 47 barrier is elusive so far, can´t bet on anyone

I think that slightly underplays what Peaty has done and puts unfair expectation on these lads – We must not allow Peaty to become a rule/expectation, strive for that of course, but we must all remain grounded and aware that he is an exception. I struggle to see a rush of men doing what he has done… It’s akin to a 48s fly or a 50s backstroke… Personally, I cant fathom that just yet.

A quick example of PB progression from athletes of the same age, in the same stroke.

Seriously though it's hard for me to take any of this. I so badly want to be supportive for a 17 year old and 13 year old that are killing it but Its getting harder. I love people and I love swimming, but I also don't want to be naive.

I am trying to place myself in their shoes. It would be hard to be a young prodigy and say no to officials/ coaches/ trainers who are giving you the opportunity to do what you love and are guiding you to success. It would be easy to lie to yourself or justify it or just accept what you are being told.

I've noticed in the US… Read more »

If anything I’d say American kids are more resistant to authority and the rules if society than ever before, definitely not more obedient or malleable in my opinion.