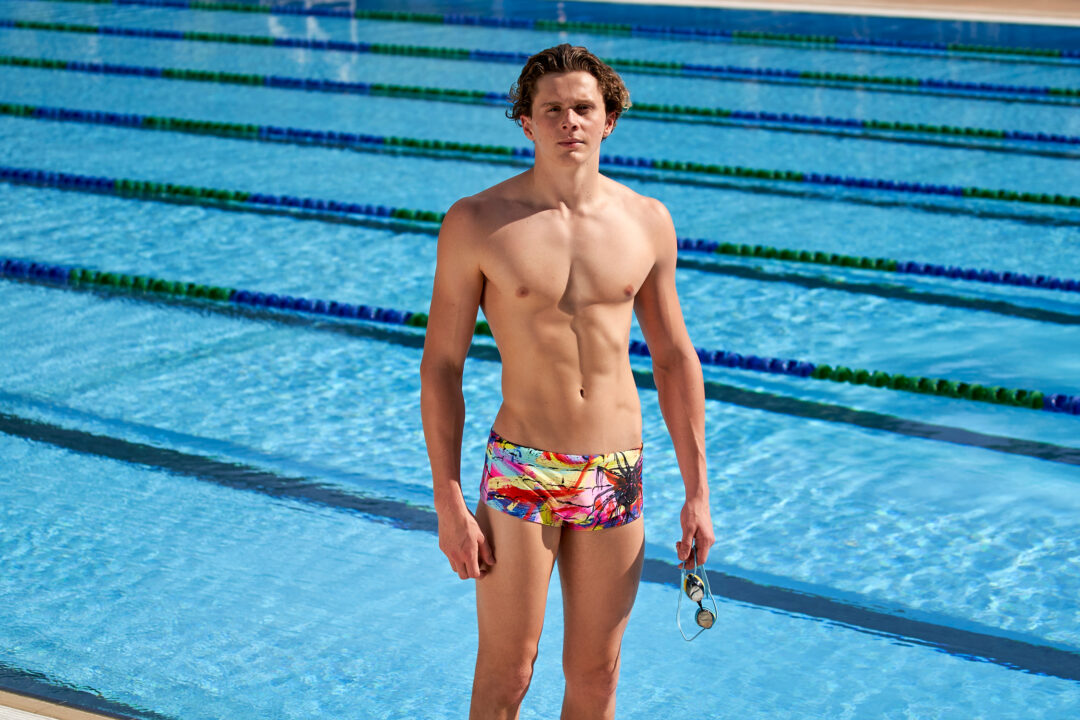 At only 17 years of age, Funky Trunks athlete Isaac Cooper is set to be the youngest male member of the Aussie swim team headed to Tokyo later this month. Current photo via Funky Trunks

At only 17 years of age, Funky Trunks athlete Isaac Cooper is set to be the youngest male member of the Aussie swim team headed to Tokyo later this month. He will compete in the 100m backstroke and, in all likelihood, in one or two medley relays as well.

Cooper grew up on a farm in Bundaberg Region, about 5 hours north of Brisbane. He started swimming at Fairymead Swimming Club under coaches Paul Simms and Scott Hamlet. From a young age, he showed himself to be a sprint backstroke prodigy. In the 50m backstroke, he has been the fastest-ever Australian for his age ever since he was 11 years old.

Now competing for Rackley Swim Team in Brisbane, Cooper has spent the last few months demolishing his personal bests in both the 50m and 100m backstrokes. While no other Aussie teenager has ever broken 25 seconds in the 50m event, Cooper has now done so twice, posting a 24.92 in April of this year, and a 24.69 in May. The latter time ranks him as the 3rd-fastest Aussie in history, just behind Ben Treffers (24.54) and Mitch Larkin (24.62).

But the 50m backstroke is not contested at the Games, meaning Cooper’s only realistic shot of making the team was in the 100m backstroke. At Aussie Trials in June, he put up a 53.49, finishing just behind Aussie record holder Mitch Larkin who finished in 53.40. This was an astonishing time in an event where neither the 17yrs nor 18yrs national record was previously under 54.5. But with Australia’s qualifying time for Tokyo set at 53.40 (Larkin matched it to the 100th of a second), the result was just barely off what was needed for an automatic spot on the team.

Fortunately, Cooper was in the top 2 in his event and easily met the international qualifying standard of 53.85. Moreover, he could swim in the heats of the men’s or mixed 4x100m medley relays at the Games, allowing Mitch Larkin some extra rest in his busy event lineup. To his and his coaches’ delight, minutes before the team was officially announced, Cooper received the news that he was headed to Tokyo.

Cooper will enter the Games as the 26th-fastest 100m backstroker in the world since 2019, and the 22nd-fastest this year. Several swimmers ahead of him did not qualify for their own countries’ teams, meaning he has an excellent chance of making the individual semifinal. He will likely need to break the 53 second barrier to have a shot at the final.

Cooper may even have a shot at medaling if he swims the men’s or mixed 4x100m medley relay, regardless of whether he competes in the finals. Great Britain and the United States are expected to be the dueling favourites in both of these events. But Australia, as well as other swimming powerhouses like Russia and China, will also likely be jostling for places on both podiums.

We are lucky to have Funky Trunks athlete and former Yale University swimmer, Jonathan Rutter on board as a regular writer, bringing athletes’ stories and accomplishments to life. Jonathan was born and raised in the US and with his New Zealand heritage competes for New Zealand internationally. The breaststroker and 2018 Oceania Championships ‘Swimmer of the Meet’ is based out of Virginia Tech where he swims for Pinnacle Racing VT, a pro training group under Coach Sergio Lopez Miro. He counts graduating from Yale in the top 10% of his class as one of his most significant achievements and has a mighty fierce breaststroke kick.