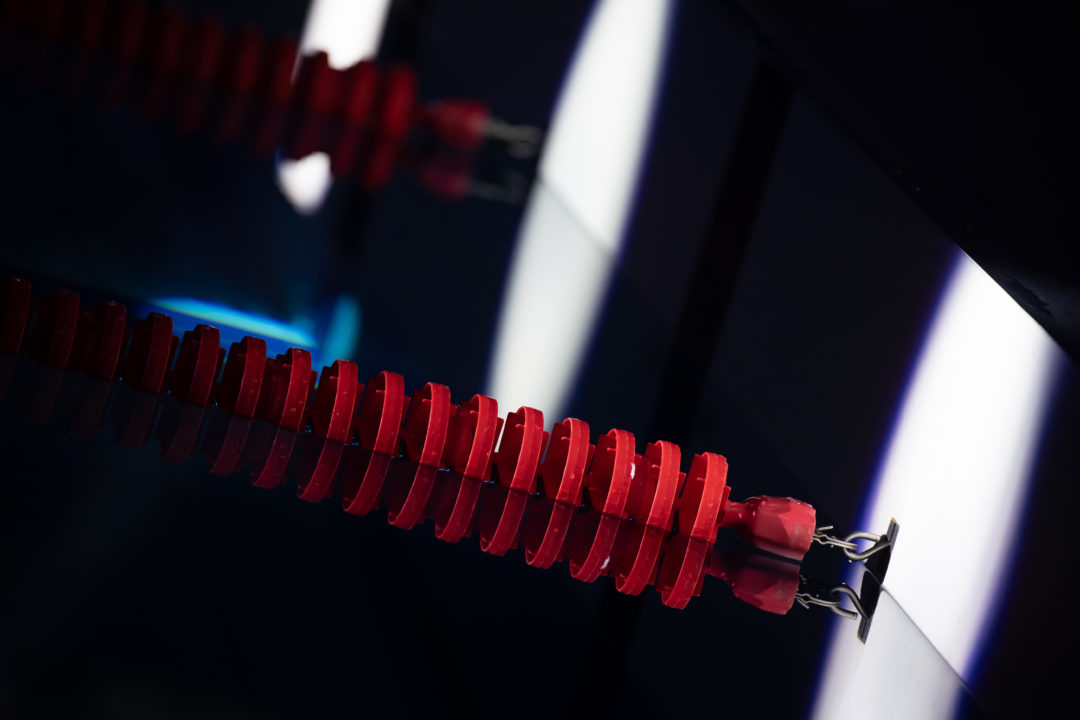 The Bend Swim Club in Bend, Oregon has a new head coach this season, but for their star swimmer Diggory Dillingham, his third team in a few years has actually meant the same coach.

That’s because the coach of the Bend Swim Club is his mom, Megan Oesting.

On Saturday, Dillingham broke the Oregon LSC Record in the 50 yard free, and nobody was more surprised than his mom, and coach, Oesting.

Dillingham’s focus meet is next weekend’s Winter Junior Championships – West meet in Austin, but according to Oesting, he was racing this weekend to help his teammates qualify relays for bigger national-level meets.

In his first swim of the weekend, he anchored the medley relay with a 44.80 split while suited and not shaved – and a very conservative relay start.

The team missed cut in that relay, so in his next swim, he led off the 400 free relay to get a split in case it helped the team aggregate a medley relay qualifying time later.

His electric razor ran out of batteries before the session, though he was able to clip (trim shortly, but not shave) one leg, before leading off the 400 free relay in 44.86. That relay swam 3:04.33, which easily qualifies them for the Winter Junior Championships.

He then clipped (but didn’t shave) the other leg and swam a 20.14 on Sunday morning, with what his mom/coach called a “totally jammed turn.” He wasn’t going to swim in finals, but did so to work on fixing that turn.

In finals, he hit the turn dead-on, swimming 19.88 and breaking the Oregon LSC Record for the 15-16 age group. That record was previously set in 2018 by Dutch Olympian Caspar Corbeau when he swam for the Tualatin Hills Swim Club. Corbeau is best known as a breaststroker, but as he showed over the weekend at the Minnesota Invite while swimming for the University of Texas, is more versatile than the average elite breaststroker.

“I actually didn’t realize he was going to go that fast, though, so I was probably the most surprised person in the room when the 19.88 popped up,” Oesting said. “He seems to be ready to race in a few days!”

Dillingham is in the 4th lane from the bottom in the white cap.

For Dillingham, an uncommitted high school junior, that time ranks him 15th-best all-time in the 15-16 age group. In the spring, SwimSwam ranked Dillingham as a “Best of the Rest” qualifier in the sprint free category among class of 2023 recruits. He was the 2021 North Carolina 4A state champion in the 100 free.

Other Highlight swims from the meet:

He’s got more in the tank. That was a fairly slow start, and he picks his head up before the turn. Easy fixes!

What an awesome swim!

Your details on his shaving, err “clipping,” routine is rather impressive!

While the actual content of this article is great, some of these details kinda make me scratch my head.

What do we do next week when he doesn’t run out of shaving cream, but he goes 19.89?

Yeah, that got a little strange.

His entry on his start is insane, just slips into the water

That is a smoooooth stroke! Keep it up!

I’m more impressed with the name