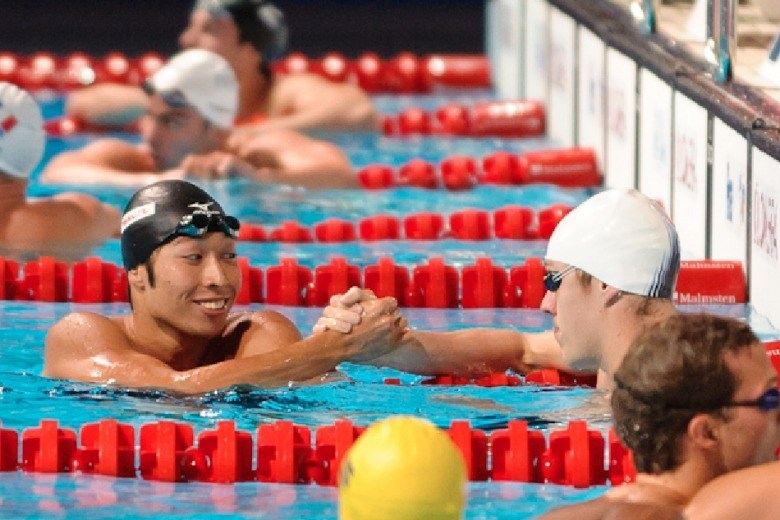 Seto, Hagino, Ikee and several other key players were in action again tonight in Tokyo for Day 2 of the 2016 Konami Open, the last major meet before April's Olympic Trials. Archive photo via Victor Puig

Get a glimpse of two dynamic Japanese swimmers at their best in these race videos from this weekend Konami Open.

Day 2 of the 2016 Konami Open concluded today with additional meet records biting the dust as Japan’s top swimmers took to the Tatsumi International Swimming Center Pool. The meet marks the last major domestic competition before the best of the best take to the pool in April to determine the Japanese Swimming Olympic roster.

For the women, yesterday’s 50 freestyle winner and new World Junior Record Holder in the event, Rikako Ikee, got the job done again today in the 100 free. Ikee stopped the clock at a swift 54.13 to take the top prize and also fall just .14 of a second short of the 53.99 Japanese National Record she set at last month’s Kitajima Cup.

Ikee is just 15 years old and is now ranked 8th in the world in the 50 freestyle and her time today in the 100 ranks as the 15th-fastest internationally this season in that event. Teammate Miki Uchida doubled up on her runner-up finish from yesterday with a 2nd place finish in this 100 race, touching in 54.48.

The men’s side also saw its 50 freestyle winner from yesterday remain victorious in the 100 today, as Katsumi Nakamura registered a time of 49.00 to take the win in Tokyo today. Nakamura is Japan’s National Record Holder in the 100 freestyle event, having blasted a 48.41 at last year’s Japan Open. He’s since been as quick as 48.55 last September, a mark which currently stands as the 11th-fastest in the world.

In backstroke, Junya Koga reversed his win order, claiming the meet title in the 100 backstroke yesterday and then topping that off with a 50 backstroke win today. Koga’s mark of 24.71 scored a new meet record for the Ann Arbor-based athlete tonight. Koga remains as the 5th-fastest in the world in this event.

Another meet record fell in the form of Chihiro Igarashi’s 400m freestyle win in the only sub-4:10 time of the field. 4:09.83 is the time Igarashi clocked tonight for the win, a mark which sits outside of the world’s top 25. Chihiro is her nation’s record holder in the short course version of this event with the 3:59.59 she scored at the 2014 Short Course World Championships in Doha.

Yesterday’s 400 IM winner, who registered a new Japanese national record in the event, Sakiko Shimizu, did damage again today in the shorter IM event. Shimizu scored a new meet record with her 200 IM win today, touching in a time of 2:10.51, over 2 seconds faster than her nearest competitor. Shimizu’s season-best headed into this meet was the 2:10.76 she wrangled in at the Dubai World Cup, so tonight’s performance now ranks as the 3rd-fastest in the world.

Breaststroker Yasuhiro Koseki also made a dent in the world rankings, racing his way to the top of the podium in the men’s 100 breaststroke. His mark of 59.67 scored the only sub-minute time of the field, as well as a new meet record for the 23-year-old. His time now stands as the fastest of all Japanese men this season, as well as 4th-fastest internationally. Veteran Kosuke Kitajima finished 2nd in 1:00.57, his fastest of the season. Worldwide, South Africa’s Cameron Van der Burgh remains as the only swimmer to have dipped into the sub-59 territory, having claimed a stunner of a time at 58.97 early on in the season in Chartres, France.

The two Japanese studs who usually blow away the competition each fell a little flat on day 2 in Tokyo, however. All-around Olympic medal threat Kosuke Hagino tried the 200 backstroke on for size tonight, aligning with what his coach said earlier in terms of Hagino’s most likely Olympic Trials event line-up. While in the midst of a training camp last month, Hagino’s coach Norimasa Hirai stated that the Olympic medalist will be targeting the 200 IM, 400 IM, 200 free and 200 back for Trials. Hirai did insert a caveat regarding the 200 back however, that, if he were to scratch one race, that would be the one to get the ax.

Although 21-year-old won the 200 backstroke event tonight in Tokyo, his time of 1:56.10 was no doubt slower than he would have wanted. Yes, the mark still ranks within the world’s top 5, but with Aussie Mitch Larkin regularly throwing down times in the 1:53/1:54 range, Hagino may give serious thought to whether or not this event will stay in his Olympic preparation repertoire. Especially in light of the fact that he would be facing a 200 IM/200 backstroke double both at Japanese Trials and in Rio should he qualify for both events.

Headed into this meet Daiya Seto’s season-best 200 IM time was the 1:57.72 he threw down last December, followed up by the 1:57.95 he scored at last month’s Kitajima cup. However, today Seto touched in a time of 2:02.09, which rendered him 4th and well-off his usual pristine game.  If anything, the result is more than likely just an indication of where the 21-year-old is at in training with Trials 2 months out.