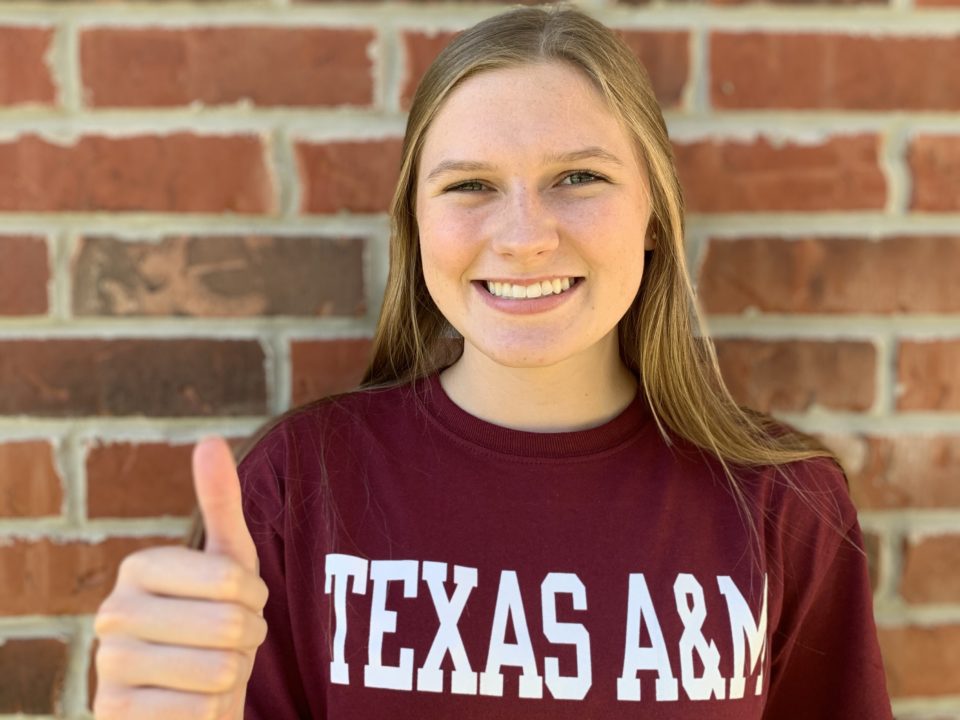 Sarah Holt, who has attended the Texas A&M Swim Camp in the past, is committed as a member of the Fightin' Texas Aggie class of 2025.

Sarah Holt from the YMCA of Northwest Louisiana and Calvary Baptist Academy in Shreveport, Louisiana has verbally committed to Texas A&M University. A high school junior, Holt is scheduled to join the Aggies in the fall of 2021.

As a younger swimmer, Holt attended the Texas A&M swim camp (the school is located only 4 hours from her home) and has posted pictures on social media attending a Texas A&M football game as a high school freshman.

In November, at the Louisiana 3A High School State Championship meet, Holt went a perfect 4-for-4 in state titles. That means that in 3 seasons, she’s won 11 out of a possible 12 state championships, with her only blemish coming as a freshman when Calvary Baptist’s 200 medley relay finished in 3rd place.

While Holt’s best time in her best event, the 100 fly, is still 1.7 seconds away from SEC scoring range, her times are without her primary taper meet, Y Nationals, as a junior. What’s more, A&M head coach Steve Bultman has had luck with turning similar swimmers into stars. For example, Sarah Gibson came out of high school with best times of 58.5 in the 100 fly and 1:48.3 in the 200 free, and by the time she finished she was a member of the U.S. National Team as a butterflier. After multiple best times in the 200 free already in the 2019-2020 season, she was lined up for a ‘pop’ in that swim at Y Nationals.

The Texas A&M women could use another surprise swimmer like Gibson – the program produces as many of those as any top-caliber program in the country. After winning 4 consecutive SEC titles, the A&M women took a back-slide in both the conference and nationally last season. They finished 6th in the SEC and, without diving, were seeded to finish just 25th at the NCAA Championships before they were cancelled.

Terrific decision Sarah!! Looking forward to seeing you in the pool in 2021. Welcome to the Aggie Family👍👍!!