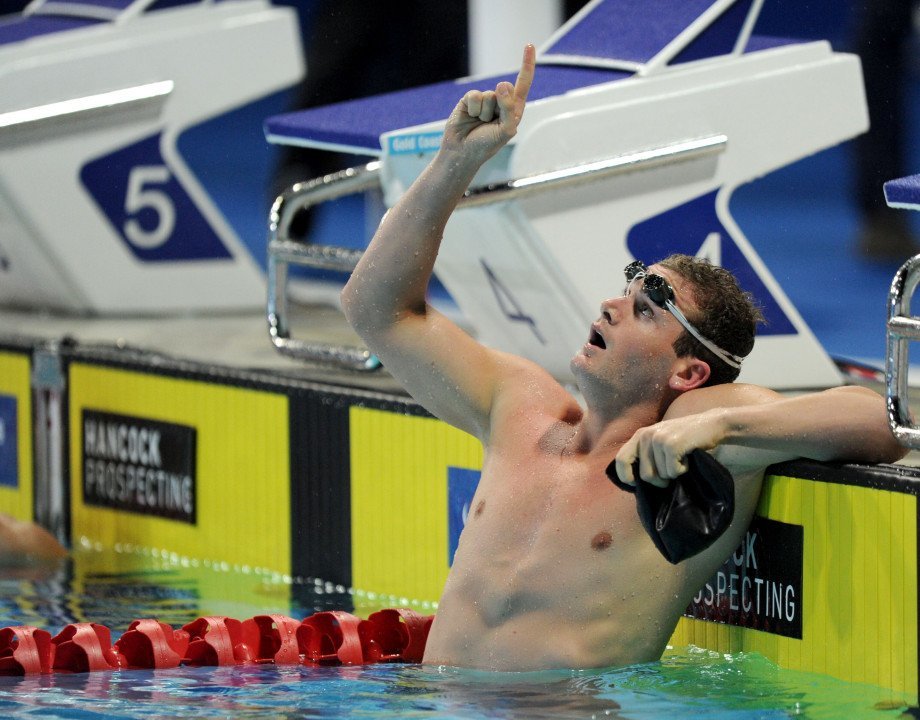 Several notable items emerged from tonight’s competition in Doha; some were expected, others….not so much.  Read on and then tell us your “big thing” from tonight’s finals in Doha.

1. Brazilians’ big day – The Brazilians stepped up in a big, collaborative way on Day 2 of the SC World Championships.  They started off the night with the 4 x 50m medley squad earning gold in a new World Record time of 1:30.51.  Guido Guilherme, Felipe Silva, Nicholas Santos, and Cesar Cielo combined to completely smash the existing Russian-held record of 1:32.78 set in the morning session of this same competition.

Felipe Silva then pulled off somewhat of an upset by defeating Great Britain’s Adam Peaty in the men’s 100m breaststroke.  Silva sped out in 26.32 and held on to close in a championship record time of 56.35.

Following up on his monster 20.08 anchor split on the relay, Cesar Cielo then went on to earn the top seed in the men’s 50m free semifinals with his time of 20.80, leading the tight pack of fast beasts with the likes of Russia’s Vladimir Morozov (20.88) and France’s Florent Manaudou (20.43).

In the second to last event of the night, Joao De Lucca also gave up a huge individual performance in his split of the 4 x 200m free relay. His 1:41.85 was not only the fastest lead-off split of the field, but it broke the South American record previously held by Nicolas Oliveira set in 2009 (1:42.01).  Read more about this feat here.

Finally, the Brazilians ended the night on top, winning the mixed 4 x 50m medley relay in a time of 1:37.26.  The team of Etiene Medeiros, Felipe Silva, Nicholas Santos, and Larissa Oliveira combined to just out-touch the mixed relay from Great Britain (1:37.46) and give Brazil its second gold medal of the night.

2. Breaking mixed medley myths – When the mixed relays began to make their way outside of the Continent by FINA recognition of World Records and inclusion in FINA events, a statistics-based trend popped up. Many countries have decided, seemingly hard-and-fast, that they will swim males on the first two legs of a mixed medley, and females on the last two legs. The Brazilians, however, bucked that trend by winning gold on Thursday with a woman leading off (Etiene Medeiros) and a woman anchoring (Larissa Oliveira).

The reality is that this is a scenario that some of the swimming nations with less depth are forced into. Brazil swam this relay and missed the World Record by less than a tenth (a World Record held by a stacked American relay from Duel in the Pool no less). That even includes having Oliveira anchor, when she’s only Brazil’s third-best female 50 freestyler.

The logic makes sense from the perspective of trying to help your females avoid swimming through the wake of their male opponents, but this is a subject that warrants further research. After all, this race that has been around in Europe a few years longer than everywhere else has never been dominated by male-male-female-female at the European Championships. There could be some deeper psychology in play here – Medeiros, for example, racing against almost entirely men, split a 25.83 – which crushed her own South American Record by six-tenths of a second. Brazil was in 7th after her race, but that was the key race of the relay for them.

3.  Katinka Hosszu’s vindication? – Critics of FINA’s decision to award the Female Swimmer of the Year award to Hungary’s Katinka Hosszu prior to Worlds certainly had some sway to their argument with the utterly dominant performance out of Mireia Belmonte Garcia on Day 1 of Worlds.  However, Hosszu did her part to quell some doubts today, as she ran away with the women’s 100m backstroke, and did so in World Record fashion.  Her 55.03 from finals set the new championship and world mark and should help provide additional motivation as she swims through her intense meet schedule.

4.  Tyler Clary’s vindication? – Another award caused some slight snickering within the U.S., as Michael Phelps earned 2014 Athlete of the Year at the Golden Goggles event in late November.  Based on comments and posts, there is a big contingent who felt that Tyler Clary deserved the award, based on his performances throughout the year and overall world rankings.  Might Clary‘s behemoth of an anchor on the U.S. men’s 4 x 200m freestyle relay serve to soothe some tempers in that regard?  It appears Mr. Clary lets his swimming do the talking when it comes to determining the best athlete of the year.

5.  No Hardware tonight for the American women – Today was a rather low-key day in terms of the American women earning medals. We did see Emma Reaney earn sixth in the women’s 50m breaststroke and Lindsay Vrooman claim a seventh place finish in the 800m free final, while Kathleen Baker swam a mega time for her in the 100m backstroke 57.07 to earn sixth.  These were all commendable performances, but something felt a little “off” not seeing an American woman on the podium in an individual event tonight.

6.  American youth flourished – Talent did present itself for the American women today with superb performances by the young Kathleen Baker and Abbey Weitzel.  Prior to this meet, Baker’s best time in scm 100 backstroke was the 57.79 she clocked at the last World Cup stop. She has progressively improved her time here, however; starting off at a 57.11 in prelims and ending in a 57.07 for sixth in Finals.  For Weitzel’s part, she earned fifteenth in the women’s 100m freestyle semi’s with her time of 53.14.  Simply amazing on the world stage for these 18-year-olds.

7.  An aching for a “Clash of the Fly Titans” – Seeing Chad Le Clos power his way to a new world record in the men’s 100m butterfly (48.44) just begs for the king of this distance, Michael Phelps, to face the South African sensation as soon as possible.  With Phelps unable to participate in the the Long Course World Championships due to his suspension, it does make one’s heart and soul ache a bit to not see the “Greatest Olympian of All Time” face Le Clos head on; however, it gives Tom Shields a phenomenal opportunity to step into the spotlight as he did tonight, earning the silver medal.

8.  Japan’s 400IM supremacy continues – While it is nothing new to see Japan’s Daiya Seto and Kosuke Hagino on the podium in the 400m IM, it is slightly surprising to see these gentlemen in the order in which they finished tonight.  Seto took first place tonight in the final in a time of 3:56.33.  His time surpassed both the Japanese and Asian records with his performance, indicative that this remarkable duo’s first place finishes will see-saw back and forth on their journey to Kazan.  See more about Seto’s studly race here.

9.  McEvoy is movin’ on up – Australia’s Cameron McEvoy certainly has a solid record in the 100m and 200m freestyle distances, but his 50m freestyle performances have been growing more impressive.   At the 2012 Australian Short Course Championships, McEvoy’s times were in the 22.00 range, then 21.33 at this year’s edition of that same meet.  In today’s semi-finals in Doha, McEvoy slid into the sixth spot in a time of 21.14.  Yes, it is not quite in the same range as Cielo’s 20.80, but it is fast enough to be in the mix for a potential bronze medal.

10. Lack of livestream –  From a fan standpoint, it is big enough of an obstacle willing oneself to wake up in the middle of the night to loyally cheer on one’s favorite swimmers doing what they do best.  However, it is an entirely different, nasty animal waking up to merely hit refresh a million times on the live results….waiting for “real-time” race outcomes to know the medal winners.  Twitter helps tremendously and the races make it to the web as quickly as possible.  But, there is no doubt a let-down in not being able to see heated battles, such as the men’s 4 x 200m freestyle relay, as they are actually unfolding live.  This is compounded by the fact that the other major meet in which the U.S. team is competing is indeed streamed live (2014 Winter Nationals).

Anyone see the women’s 400 IM? At 1:32 Hosszu very clearly does two full dolphin kicks on her pulldown. https://www.youtube.com/watch?v=iea5Se_2QRo

Real good argument for underwater camera reviews. No way to claim that was anything but two intentional kicks.

Etiene time if could be “OK” would be a textile best right?