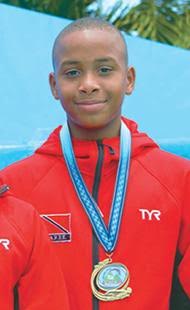 The following is a press release courtesy of ASATT, the Amateur Swimming Association of Trinidad & Tobago. Zarek Wilson continued...

The following is a press release courtesy of ASATT, the Amateur Swimming Association of Trinidad & Tobago.

Jahmia Harley just missed out on the national record breaking blitz missing the 13-14 200m backstroke record by 44 hundredths of a second. The Tidal Wave Aquatics lass touched the wall first in 2:22.59, evading the 1993 record of Sangeeta Puri. Harley managed however to set a new meet record, erasing the 2009 mark of Kimberlee John-Williams (2:23.98).

Jeron Thompson broke his 50m breaststroke record for the third time in as many swims. Swimming in time trial in the morning sessions, Thompson stopped the clock at 28.10, ahead of his record of 28.32 set the previous day. The Atlantis athlete also won gold in the 50m freestyle (23.26) and silver in the 100m breast (1:03.37). The 100m breast was won by his teammate Abraham Mc Leod in 1:00.63.

The Chatoor siblings continued their dominance in the long distance races as the Marlins swimmers won the 400m freestyle. Jada clocked 4:33.57, while Graham touched the wall in 4:06.81. The sibling duo won the 200, 400 and 800 free at the Championships, with Jada  adding the 400IM and Graham adding the 1500m free to their gold tallies.

The next meet on the calendar is the Atlantic Primary School Meet on November 27 at the Point Fortin Community Pool, while the ASATT December Invitational takes place at the National Aquatic Centre from December 15 – 18.