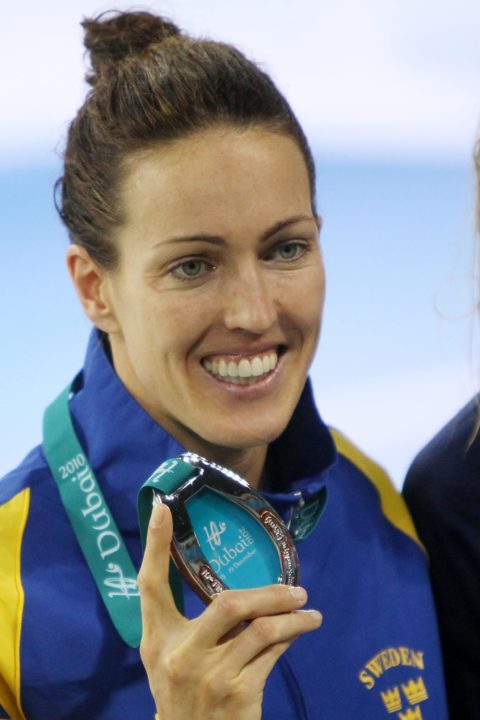 At long last, one of the great sprint careers in swimming history is coming to an end. 39-year old Swedish... Archive photo via Lapressa

At long last, one of the great sprint careers in swimming history is coming to an end. 39-year old Swedish swimmer Therese Alshammar told Swedish media this morning that she was calling it a career after a final swan song at next week’s Swedish Short Course Championships in Stockholm.

In June of 2013, Alshammar briefly put her swimming career on hold to give birth to her first child – whom she had with her partner and coach Johan Walberg. Since returning, she’s never quite returned to her magical form while living and training in Australia.

Alshammar made her first international appearance at the 1993 European Championships, where she was 4th in the 100 back; and a year later at the 1994 World Championships, where she was a semifinalist in the 100 backstroke. Two years later, she made her Olympic debut in Atlanta – the first of 6 career appearances. Alshammar is the only female swimmer in history, and one of only 3 swimmers overall (countrymate Lars Frolander and Turkey’s Derya Buyukuncu both have matched her number) to appear in that many Olympics.

After travelling to the United States to train at the University of Nebraska, and later the famed Race Club as part of its “World Team,” Alshammar broke through with World Records in the 50 and 100 SCM freestyles in December of 1999 (which stood for almost 6 and almost 8 years, respectively). She carried that momentum through to the 2000 Olympics with silver medals in both the 50 and 100 free, plus a bronze as part of Sweden’s 400 free relay.

Later in her career, she would transition from a sprint backstroker to a sprint butterflier, and wound up breaking the World Record in the 50 fly in long course in 2007, and then again in 2009 after Marleen Veldhuis took the mark away from her. She is the current World Record holder in the 50 short course meters butterfly, having broken that record on three consecutive occasions: most recently a 24.38 at the 2009 Singapore World Cup. She also held the World Record in the 100 IM for 4 days in 2009.

Alshammar won her last World Championship medal in 2011, a gold in the long course 50 free, and has continued on as the matriarch of Swedish swimming ever since as Sarah Sjostrom has risen to become the sport’s biggest name in the country.Alshammar’s last Olympics saw her swim a single race, the 50 free, where she placed 15th in the semi-finals in a time of 24.72. While the swim was not the high results she’d had throughout her career, her chance to march in the Swedish flag at Rio’s opening ceremonies was an unforgettable moment.

Legendary swimmer and gorgeous, genuine and inspiraing lady. All the best to this epic person. Thanks for showing the world of young swimmers how you can be fast and humble. You rock.

Very classy lady, great competitor. Wishing her all the best.

How can some reader give an “thumb down” to this carrer? Probably someone who doesn’t know the sport of swiing.