Van der Burgh Is Enjoying Swimming Now More Than Ever 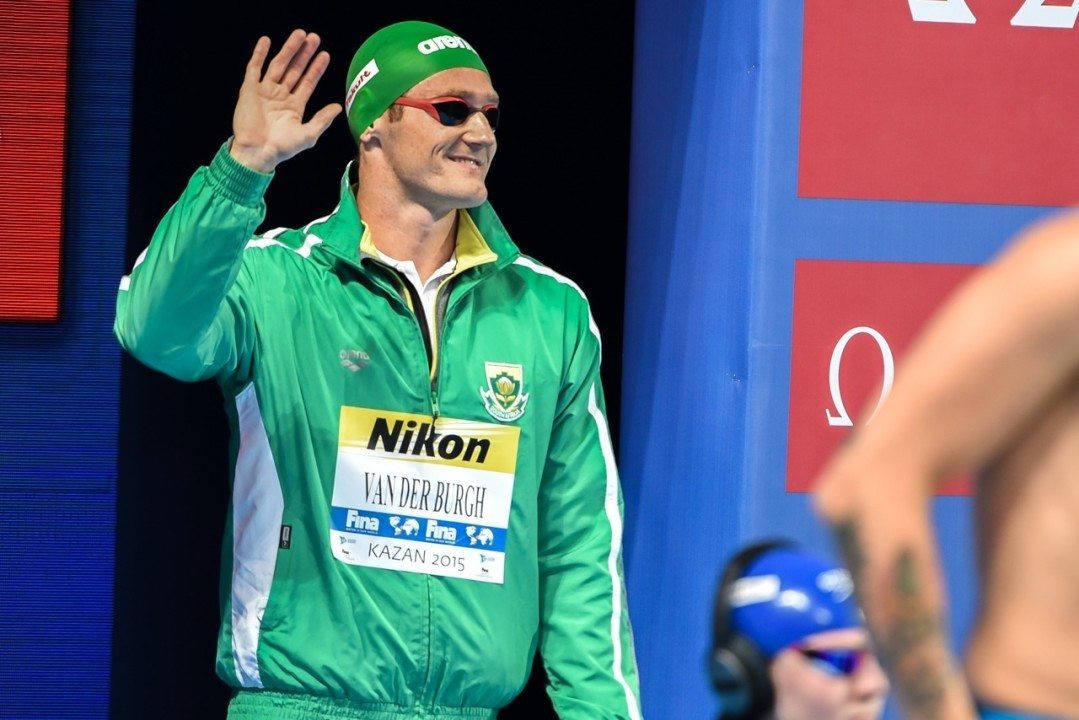 South Africa’s Cameron Van der Burgh came away from the 2015 FINA World Championships with two silver medals, earning the runner-up prize in the 50m and 100m breaststroke races.  Van der Burgh’s respective times of 26.62 and 58.49, sit second only behind those of Great Britain’s Adam Peaty, who holds the world records now in both events.

Although Van der Burgh indicated he was very happy with his two silvers and corresponding times from Kazan, a positive outlook wasn’t always the 27 year-old’s go-to mindset.   After the 2014 Commonwealth Games, for instance, ‘VDB’ told Sport24 recently that “I was so confident going into those Games, but my mindset was wrong.” Alternatively, he says that this year, he is “changing that up and learning a few different tricks and the change has been unbelievable.”

Immediately after Kazan, VDB earned four straight golds in the first two stops of the FINA World Cup circuit.  At both Moscow and Chartres, the South African came away with the 50m and 100m breaststroke golds, cleaning up a total of $56,000 in the process.

Says Van der Burgh of his mentally in-sync performances, “You can just see when someone loves something it comes so natural for them, and like before you wouldn’t want to travel after the World Champs because you have been away for so long. But for me it was awesome and I couldn’t wait to get to another competition. I am enjoying my swimming more than I have my entire life.”

VDB had originally only planned on doing a few of the World Cup series’ legs, but says he will now be gunning for the overall title.  If successful, 2015 would mark his third such crown, having already won the overall men’s title in both 2008 and 2009.

Hong Kong hosts the next stop of the FINA World Cup series, with its meet taking pace on September 25th and 26th.

I predict that Van Der Burgh will go 58.2 for silver next year behind Peaty who goes a new WR in 57.5-57.7. If Peaty doesn’t start fast enough however VDB could sneak in and win gold. Murdoch or Cordes wins bronze in 58.8

Good to see that he is being professional, and making the most of the financial rewards on offer. The World Cup this year gives swimmers the chance to make LCM Olympic A and B standards early in the year. That is a golden opportunity for those that have qualifying flexibility. Good luck to them.