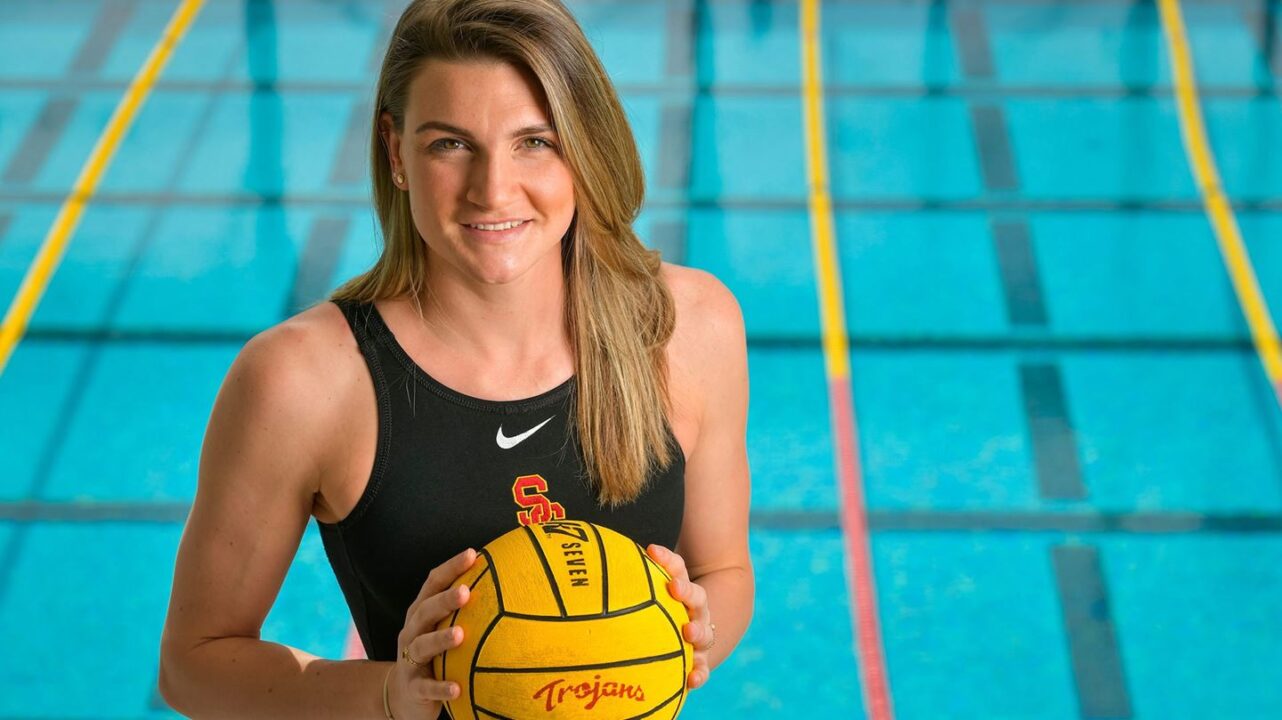 For the second time in the past three MPSF Tournaments held, USC’s Maud Megens has picked up top honors as MPSF Tournament MVP. Fresh off a third consecutive MPSF crown, the Trojans also boast MPSF All-Tournament Team honorees Denise Mammolito and Holly Parker, representing USC’s all-around strength on display at the 2021 tourney last weekend.
Senior Maud Megens earned her first MPSF Tournament MVP selection in 2018 just before the Trojans’ run to the national title that year. USC’s Paige Hauschild earned MVP status in 2019, and 2020’s competition was not held due to the coronavirus pandemic. In this 2021 tourney, Megens was again a driving force for the Trojans. In addition to her typical defensive disruptions, Megens scored five goals and had three assists across USC’s two wins. In the semis, she delivered two blasts to help USC beat host Arizona State 16-8. The next day, Megens tallied a hat trick to lead USC in a 9-6 championship win over Stanford. Her scoring efforts have lifted her to within five goals of taking over as USC’s No. 8 all-time scorer, as she currently sits at No. 9 with an even 200 career goals.
Both in their fifth and final seasons at USC, Denise Mammolito and Holly Parker have picked up their first places on an MPSF All-Tournament Team with this 2021 effort. Captain Mammolito’s skills shined through once again at the event, punching up three goals in the semifinals and then holding strong at both ends to help key her team on course for the championship victory over the Cardinal. Mammolito also is in reach of an upgrade on the career scoring charts, now at No. 12 with 168 goals, she’s just four away from breaking into the all-time top-10.
In the cage, goalie Parker was a force throughout, backing up her Trojan defense with eight saves vs. the Sun Devils and 10 to keep the Cardinal at bay in the final. She’d also come up with countless key takeaways to give her team back the ball as USC worked its way to a third straight MPSF crown.
At 19-1 overall, USC has earned the top seed for the coming NCAA Tournament, set for May 14-16 at UCLA’s Spieker Aquatics Center. Megens, Mammolito and Parker will be looking to win their second NCAA title as Trojans, having won it all back in 2018, as USC is aiming for a seventh national championship for the program.