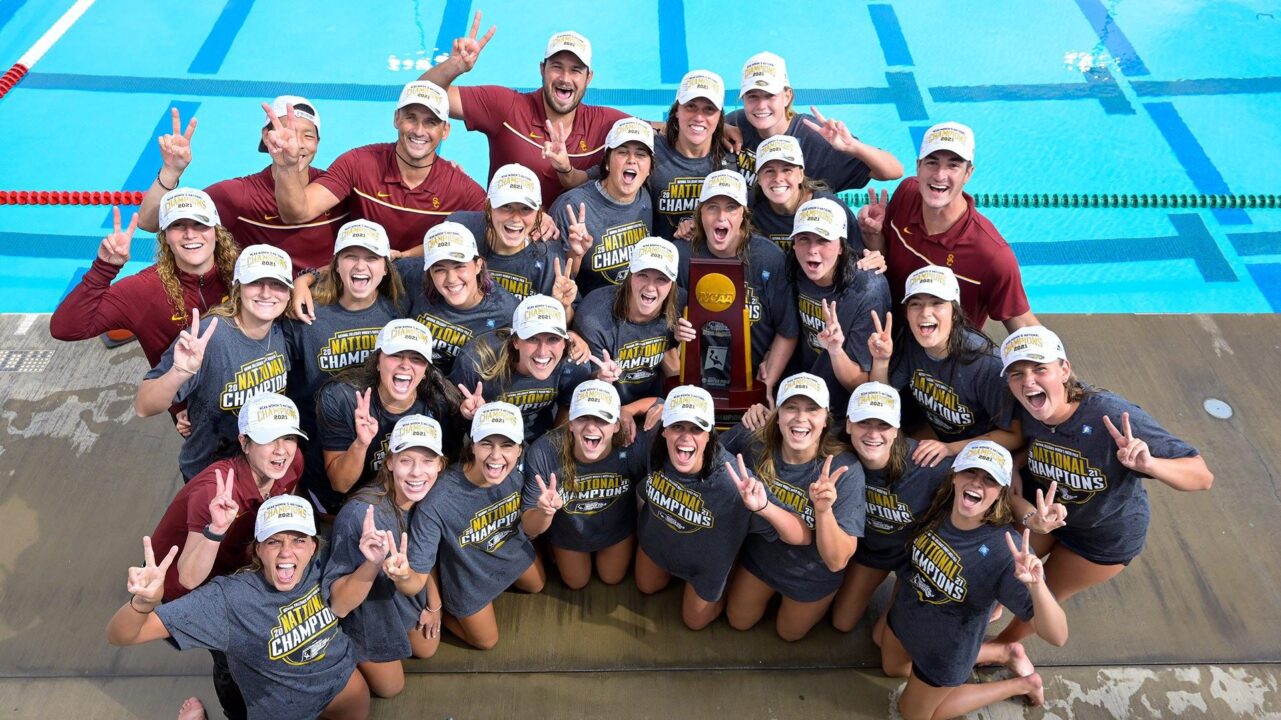 USC team made history with the most goals scored and largest margin of victory ever in an NCAA women’s water polo championship game, beating rival  UCLA 18-9. Current photo via John McGillen

WESTWOOD, CALIF. — The USC women’s water polo team made history with the most goals scored and largest margin of victory ever recorded in an NCAA women’s water polo championship game, beating rival  UCLA 18-9 to claim the Trojans’ seventh national championship today in Westwood, Calif. Redshirt seniors Maud Megens and Holly Parker were the driving forces on both ends of a very well-balanced effort by the Trojans, as Megens nailed six goals and Parker collected a career-high 13 saves.
USC finishes the year at 22-1 overall having very much avenged its only loss of the year with this dominating victory over the Bruins. What’s more, this latest NCAA trophy marks the university’s 109th NCAA team championship and 132nd team national championship.
USC never trailed in this one, turning a one-goal game in the first frame into a 10-goal advantage in the fourth as the Trojans took total control in the second frame. UCLA got one back to back it 3-2 in the first before USC unleashed a six-goal surge that established the Trojans’ position to stay. By halftime, USC had 10 goals in-hand, already tied for the most goals scored by a winner in an NCAA final. The Trojans were up 10-4 at the break. Bayley Weber, Mireia Guiral, Verica Bakoc and Maud Megens all had two goal on the docket by halftime for USC.
USC’s foot stayed fully on the gas pedal in the second half. UCLA may have managed an early strike out o f set, but the Trojans responded in kind with four straight goals to build out a 14-6 lead. Bakoc, Weber and Megens worked their ways to hat tricks along the way, while Kelsey McIntosh tallied her first. Goalie Holly Parker put up a wall in the cage to turn away the Bruins, who managed just a 5-meter penalty shot in the final minute before Megens buried her fourth to make it 15-7 USC entering the fourth.
There, Megens blasted back-to-back goals to get to six on the day. Bakoc’s fourth made it and 18-7 USC lead with 1:42 to go, putting the Trojans  in complete cruise control for the final 18-9 victory.
At the close of competition, Maud Megens was named NCAA Tournament MVP, joined by Denise Mammolito and Holly Parker on the NCAA All-Tournament First Team.
2021 NATIONAL COLLEGIATE WOMEN’S WATER POLO CHAMPIONSHIP
NCAA CHAMPIONSHIPS
#1 USC 18, #3 UCLA 9
May 16, 2021 | Spieker Aquatics Center (Westwood, Calif.)
USC    4 – 6 – 5 – 3 = 16
UCLA  2 – 3 – 2 – 2  = 9
SCORING:
USC — Maud Megens 6, Verica Bakoc 4, Bayley Weber 3, Mireia Guiral 2, Grace Tehaney, Denise Mammolito, Kelsey McIntosh.
UCLA — Abbi Hill 3, Ava Johnson 2, Bella Baia, Val Ayala, Brooke Maxson, Roxy Wheaton.
SAVES: Holly Parker (USC) 13, Jahmea Bent (UCLA) 3, Georgia Phillips (UCLA)  0.

Two straight weekends and two National Championship wins for Trojans over cross-town rivals UCLA! Granted, water polo and beach volleyball are somewhat “niche” sports in the US and primarily California (Pac-12) based. But they are Olympic sports with a number of athletes from USC, UCLA, Stanford, and California alums and current players on Team USA squads. It would be good to see these “niche” geography based sports expand to true national sports like swimming and volleyball.