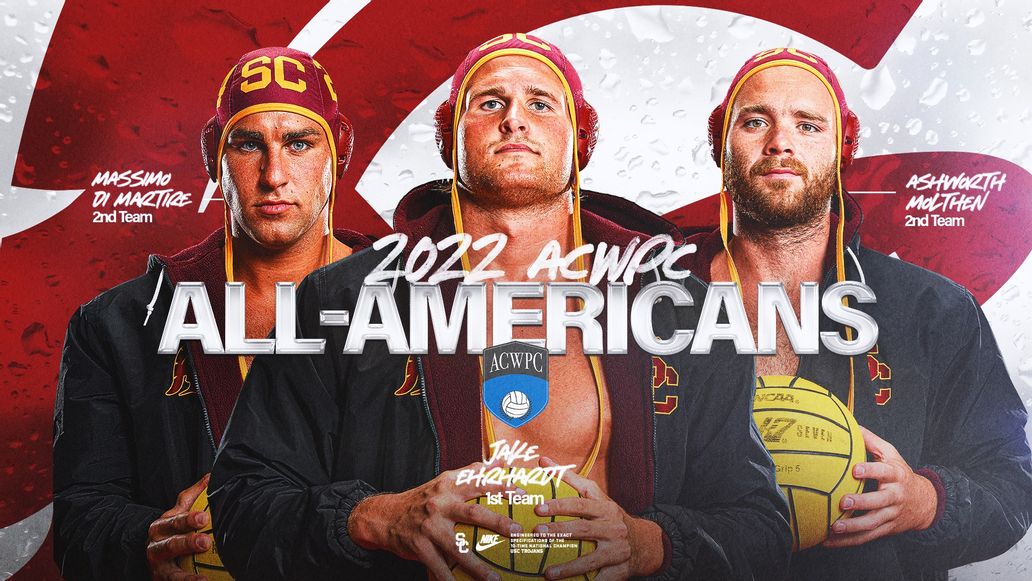 USC men’s water polo wrapped its 2022 campaign with an impressive push to reach the NCAA final for the 17th time in the past 18 seasons. At the close of the season, three Trojans have emerged with All-America honors in seniors Jake Ehrhardt and Ashworth Molthen and newcomer Massimo Di Martire.

In his fifth season of work with the Trojans, Jake Ehrhardt has hauled in his fifth set of All-America honors with his spot on the 2022 All-America First Team. The captain wrapped his USC career as the Trojans’ No. 6 all-time leading scorer with 179 career goals after serving up 55 for the Trojans in 2022. This year’s First Team accolades are his second set, as he picked up the same selection as a junior in 2020. Ehrhardt was an Honorable Mention recipient in 2018 and 2019 and had a place on the Third Team last season. In this 2022 season, Ehrhardt was USC’s second leading scorer and led the Trojans with 19 multiple-goal outings, including a career-high five goals in a key MPSF win over Stanford.

Also having completed his final season as a Trojan, senior Ashworth Molthen has his third round of All-America honors. With goals in the Trojans’ last 14 games, Molthen was USC’s third leading scorer with 45 goals in 2022 to help lock up his spot on the All-America Second Team. A Third Team selection as Trojan in 2021, Molthen also earned Honorable Mention while playing at UCLA as a freshman in 2018. Molthen amassed 67 goals in his two seasons of competition at USC following a year away to compete overseas and train with the U.S. National Team. He scored in 24 games for USC in 2022 with 15 multiple-goal efforts

Grad student Massimo Di Martire stood tall as USC’s top scorer in his first season of collegiate water polo. The Trojan newcomer has joined Molthen with ACWPC All-American Second Team honors after punching up 63 goals in 2022 to tally the most single-season goals by a Trojan since 2015. Di Martire scored in 24 different games with 17 multiple-goal outings, featuring a six-goal outburst vs. Long Beach State and five in USC’s NCAA semifinal victory over UCLA.

All three Trojans are also on the Watch List for the 2022-23 Peter J. Cutino Award, which goes to the top male and female collegiate water polo players in the nation.

What is the guy’s name on the left???