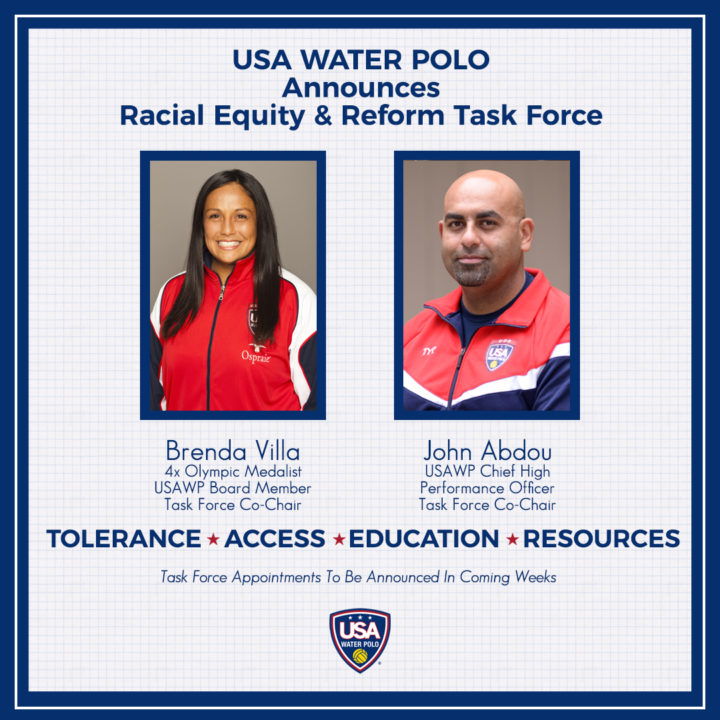 A new task force charged with ensuring zero tolerance of racism and expanding access to water polo for all – especially people of color, was announced today. Current photo via USA Water Polo

IRVINE, CA, June 16 – A new task force charged with ensuring zero tolerance of racism and expanding access to water polo for all – especially people of color, was announced today. Jointly commissioned by USA Water Polo Board Chair Mike Graff and CEO Chris Ramsey, the Racial Equity and Reform Task Force will be co-chaired by legendary athlete and board member Brenda Villa, and Chief High Performance Officer John Abdou. Appointments to the task force will be announced in the coming weeks, which will include water polo representatives from diverse experiences, backgrounds, geographies, and skill sets.

Among the issues expected to be addressed by the task force recommendations are:

Since her retirement from international water polo, following the 2012 Olympic Games, Villa has pursued another passion, giving back. She is the co-founder of Project 2020, a non-profit organization committed to providing aquatic opportunities for those in under-resourced communities. Working within the Northern California community of East Palo Alto and East Menlo Park, Villa paired high school coaching with Project 2020 efforts hoping to mirror the offerings she received during her youth where sports were available regardless of financial status.

Formerly the associate head coach for men’s water polo at the University of California, Santa Barbara and Director/Boy’s Head Coach of the Santa Barbara Water Polo Club, Abdou also spent five years coaching at Bucknell University, the last two serving as Head Coach of both the men’s and women’s programs. Prior to moving to Lewisburg, PA he served as the Boys and Girls Water Polo Coach at Burbank High School while also teaching US Government, AP Psychology, and History classes. Abdou earned his undergraduate degree from the University of California, Irvine, earning his undergraduate degree in sociology, where he also played varsity water polo. He earned his Master’s degree in Education from Bucknell in 2009.