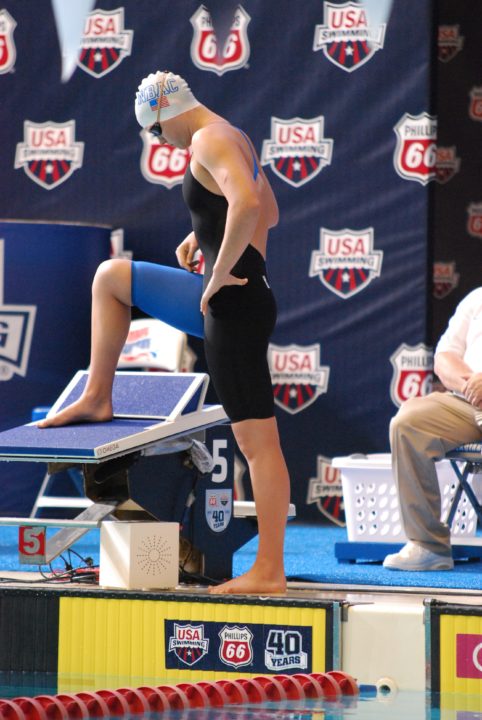 Tons of big name swimmers, including Gillian Ryan who just missed the Worlds team in multiple events, will be at the US Open. (Photo: Janna Schulze/SwimSwam.com)

Coaches of registered swimmers for the 2013 U.S. Open received today the psych sheets for the meet, which has an impressive turnout after so many swimmers skipped the World Championship Trials.

We’ll have a full preview coming int he next few days, but basically all of the big names who are not going to the World Championships will be at the meet (though, it seems that a few internationals who will be at the World Championships have forgotten to scratch, for example Roland Schoeman, who we’ve confirmed is still planning on going to Worlds).

Australia will be sending an impressive contingent to this meet, including Yolane Kukla, Kelly Stubbins, Alexandra Purcell, Mikkayla Sheridan, Bobby Hurley, and Travis Mahoney. That’s a strong list of many of the best swimmers who didn’t make their World Championship team.

In addition to that, there’s a slew of big-name NCAA swimmers and World Championship Trials finalists who will be at this meet. That includes Quinn Carrozza and Sarah Henry from the state of Texas, Gillian Ryan, Lia Neal, Leah Smith, Amber McDermott, Sarah Denninghoff, Michael Weiss, Clark Smith, Tyler McGill, Dax Hill, and Austin Surhoff.

Among the other international names in attendance include Darien Townsend and Sebastien Rousseau, neither of whom traveled to South Africa for this year’s World Championship Trials, will be at the meet, as will Danish Olympian Anders Nielsen and South African freshman star Dylan Bosch, also from South Africa.

Those are some good names; we should see some fast grudge swims. What happened to Kukla though that she didn’t make Worlds? I haven’t been following the Aussies as much this year–I’m assuming she was sick or injured??

Yolane made a move across the the entire country with her mum in tow leaving the rest of the family in Brisbane.

Is there a limit to how many international swimmers can participate in the championship final? I thought it used to be limited.

Thanks. So it looks like a few events (i.e.men’s 400,200 free) we could see a predominantly international finals field or at least, very well represented.I am curious how many >18’s that were at Nationals and could have finaled here bypassed this meet to go to Jr.Nat’s .

Hm, if Schmitt doesn’t swim at the U.S. Open, will she still be able to make the National Team? Isn’t this the last selection meet?

she will probably make national team but no APA funding for sure. weirdo thinks it is weird that she never signed with speedo, arena or anyone else yet?!

Conor Dwyer doesn’t have the same profile, but he finished up college eligibility in 2011 and didn’t sign with a major sponsor – Speedo – until 2013.