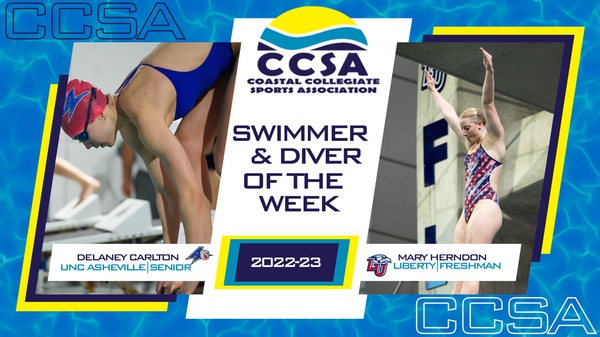 Delaney Carlton led the way for Asheville's swimmers in a 233.5-119.5 win over Georgia Southern over the weekend, logging five first-place finishes. Current photo via CCSA

CCSA Swimmer of the Week

Carlton led the way for Asheville’s swimmers in a 233.5-119.5 win over Georgia Southern over the weekend. She logged five first-place finishes, set two lifetime best times in the 200-yard medley relay and in the 100-yard backstroke. She also broke the pool record in the 400-yard medley relay.

CCSA Diver of the Week

Mary Herndon had her best meet as a collegiate diver so far, winning three-meter diving with an NCAA Zone qualifying score of 309.75 in Friday’s meet against VMI. She is the first Lady Flame to qualify for Zones on three-meter this season, and her 309.75 places her second on Liberty’s all-time top 10 performers list in the event. Herndon improved by more than 30 points from her previous collegiate best three-meter score of 273.75 from the West Virginia Invite in November. On Friday, she outscored her closest competitor by 65.1 points. Later in the meet, she scored a season-best 250.28 one one-meter, placing second.