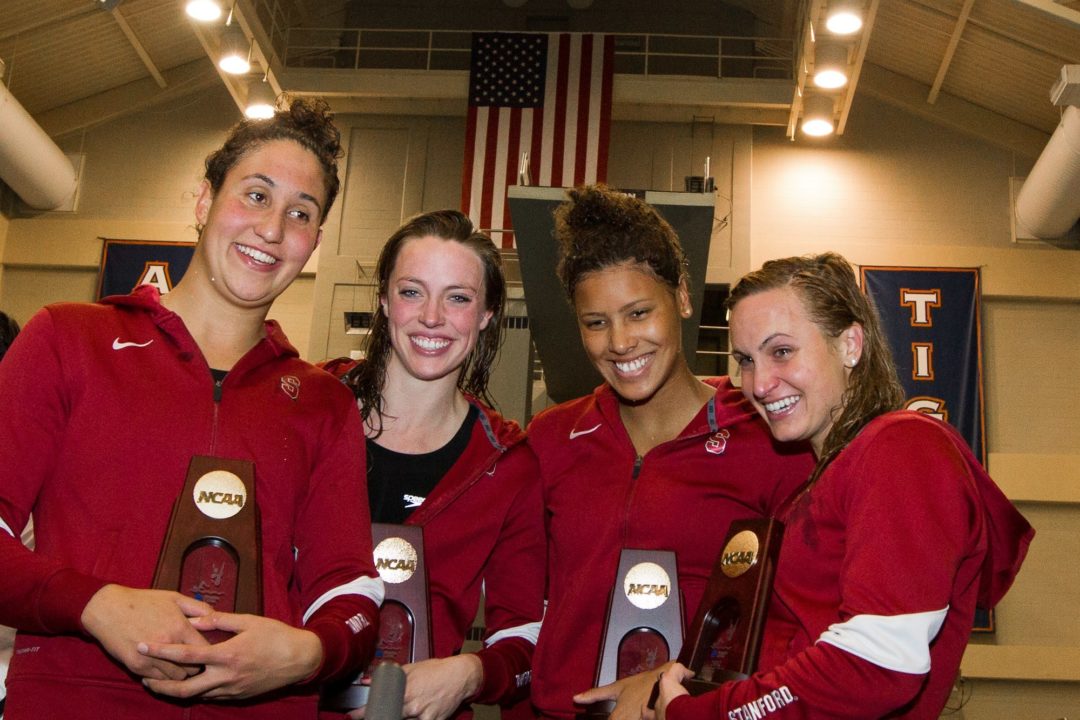 The Stanford women won the 400 free relay at NCAA's this year, a tradition they will look to continue by bringin in Duchac as their new assistant. (Photo Courtesy: ©Tim Binning/TheSwimPictures.com)

Newly-appointed Stanford women’s head coach Greg Meehan has brought in Tracy Duchac as his new assistant now that he’s taken the reigns for the No. 4 team in the country last season.

Duchac comes just weeks after stepping down as an assistant at Arizona. Her decision to resign at Arizona came just days before Meehan was hired at Stanford (or, depending on the speed of information, perhaps simultaneously).

Duchac spent one season at Arizona, and prior to that spent 5 seasons at Texas A&M, where they were in the country’s top-10 all 5 years.

Duchac’s specialty throughout her career has been working with sprinters, which is also what her specialty was as a swimmer at Purdue. Assuming she continues that role with Stanford, the job will be a tiny amount of rebuilding one of the country’s best groups after the graduation of Besty Webb and Sam Woodward.

Fortunately, The Cardinal still have a returning star in Maddy Schaefer, who will be just a sophomore. Last year, she broke the National Age Group Record in the 17-18 girls’ 100 free. The group also brings back Andi Murez, who will be a senior. Murez is a phenomenal 50-100-200 swimmer, including a 1:43.5 last season at NCAA’s in the 200 free (and the fastest returning 200 freestyler in the conference from last season).

Interestingly, both of the coaches on the new Stanford staff come from other Pac 12 schools.

Duchac is expecting her first child this winter.

I am guessing that it was not Tracy that released the “I am having a kid and don’t want to coach statement” great hire for Stanford! Arizona kind of looks like a duck on te water right now, calm on the surface but scrambling to keep it together under the surface. Just my opinion though.

We didn’t see any statement where she said that Truth – do you have a link?

I believe there was an actual statement from Arizona in regards to this as well but I cannot seem to locate it at this time! Someone else had to see this too!

It was also rumored that her husband has been looking for work as an engineer in Tucson for the past two years. He will probably have better luck in the bay area than he did in tucson. Best wishes to her, her family, and both teams.

She was only in Tucson a little over 1 year. But she did say that she was leaving for Texas because of her husbands job and was leaving coaching.

As I understand it, she never stated she was leaving to focus on motherhood. Everyone just “inferrered” that. The spokesperson at Arizona simply stated that she was leaving on good terms .Tracy’s husband had been looking for an engineering job in Tucson and was having a difficult time finding one. The couple felt it was an important time to rev up that search somewhere with more job opportunities.
I remember all of the responses this brought out about women/coaches and leaving for motherhood—all along I was thinking “you people have it all wrong. She wants to continue coaching- its just that her partner needs a job” Nothing more, nothing less.

to live in palo alto, her husband will definitely need a job….a real good job! that place is ridiculously expensive!
the best to her, her family and stanford. good hire for meehan.

so who is durden going to find? shouldn’t be hard to find a replacement for the 2 time defending champs!!!