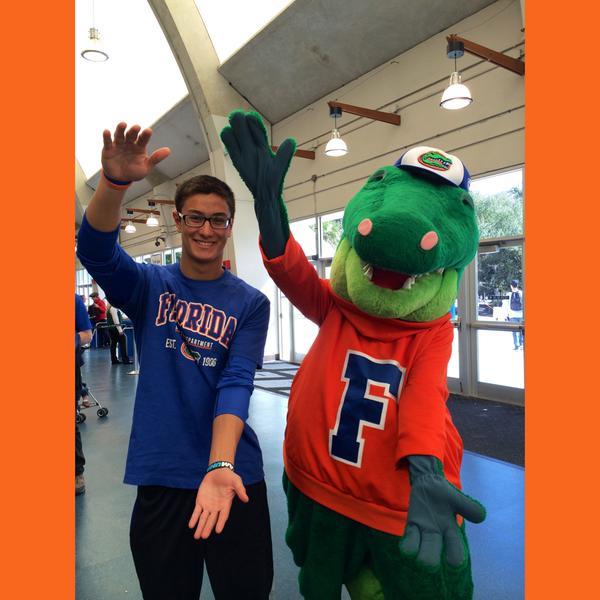 Even without making any official visits, Maxime Rooney has already decided that he wants to be a Florida Gator. Archive photo via Florida Gators

High school junior Maxime Rooney has rung a significant early bell for the recruiting class of 2016 by verbally committing to the Florida Gators.

This makes him one of the earliest commitments in memory of high school swimming.

“I’ve had a chance to research and visit some of my top schools and found that Florida had exactly what I needed for my swimming as well as my academic future,” Rooney said of the early timeline for the decision.

This decision is just a verbal one and is non-binding, as contact is very limited for current high school juniors until July, 2015.

While we haven’t yet put out our class of 2016 rankings, there’s no doubt in our minds that the National Age Group Record holder Rooney will be in the top 5, and he will be in contention for #1 overall as well. CollegeSwimming.com currently has Rooney ranked #1 in their early rankings.

Rooney cited the combination of swimming and educational programs that “I’ve been looking for” when discussing his decision and also said that Florida “offers a community where I see myself thriving.”

Rooney is currently the National Age Group Record holder for 15-16’s in the 200 yard free (1:34.57) and previously held other records that have since been broken. He’s already within reach of NCAA scoring level in the 200 free individually, before even reaching his junior-year high school taper meet. Florida placed 2nd at last year’s NCAA Championship meet in the 800 free relay.

Rooney swims for Granada High School and the Pleasanton Seahawks.

Rooney won’t be able to officially sign his National Letter of Intent until the fall.

Who knows? He could develop into a BEAST!!!

Shields committed to USC as a junior , then changed his mind senior year and chose Cal.