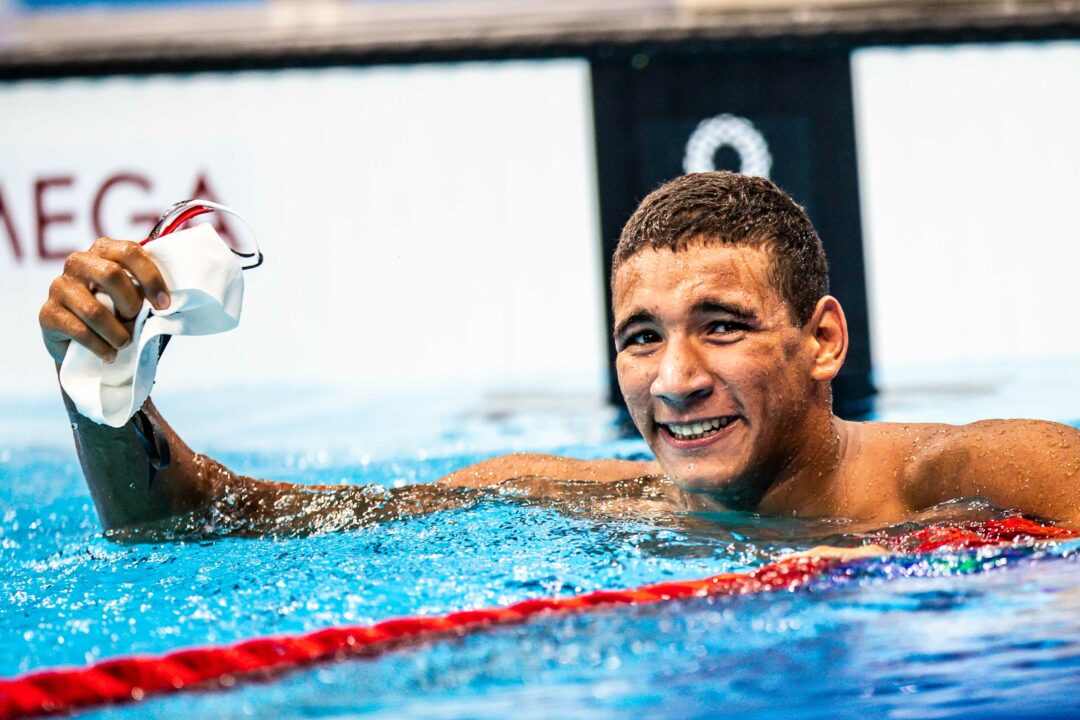 Ahmed Hafnaoui won Olympic gold in Tokyo as the 16th seed in the men's 400 freestyle—the second-lowest to reach the top of the podium since Sydney. Archive photo via Jack Spitser/Spitser Photography

During the Tokyo Olympics, Tunisian Ahmed Hafnaoui surprised everyone by winning the gold medal in the men’s 400 freestyle swimming out of lane 8.

Few people believed he could medal, let alone win the gold, mainly because he was not even among the 15 fastest seed times in the event.

But, since 2000, there was another swimmer who won an Olympic gold medal with a lower seed time. Zimbabwe’s Kirsty Coventry became the women’s 200 backstroke Olympic champion in 2004 after arriving in Athens seeded 21st. Her entry time was 2:13.87, and she won the event with a 2:09.19, which was a new African record at that time.

In Tokyo, another swimmer with a low seed time also won his event: American Bobby Finke in the men’s 800 freestyle. He had the 12th-fastest entry time and he was not considered a contender for the gold medal, especially considering the long United States’ dry spell in men’s distance events at Olympics—not a single gold medal since 1984. But Finke went on to defeat some of the favorites like Italian Gregorio Paltrinieri and Ukrainian Mykhailo Romanchuk to win the event.

Interestingly, Kirsty Coventry is also the lowest seeded swimmer to win a medal of any color since 2000. She had the 26th-fastest entry time in the women’s 100 back in 2004, and she ended up with the silver medal. In that Olympics, Croatia’s Duje Draganja also arrived in Athens with the 26th-fastest entry time in the men’s 50 free, an event in which he also won the silver medal.

Only 11 out of 158 gold medals went to someone NOT seeded as a Top 8 swimmer.

I’d love to know how low Michelle Smith was seeded before her 1996 wins in Atlanta. PEDerific swims there!

She was a multiple medallist at 1995 Euros, including double gold, so probably wasn’t seeded low at the Olympics. Still, as you say, she was certainly PEDerific.

I am surprised there are not more Chinese women on that list … they used to appear from nowhere, win big titles and then mysteriously disappear again…maybe that was pre-2000!

But usually with at least a couple of quick times in domestic meets first.

Didn’t know Coventry was seeded that low in Athens

Me either- I had always assumed she was a contender

Maybe she only tapered for the olympics, knowing that she could qualify with slower times?

Hafnaoui should move to Indiana! Coach Looze would really elevate his game!

Why would he move? His training is working just fine and he is faster than everyone at Indiana?

Duncan Armstrong (1988) was probably the lowest ranked ever. I think 46th.

What a great win from lucky lane 6.