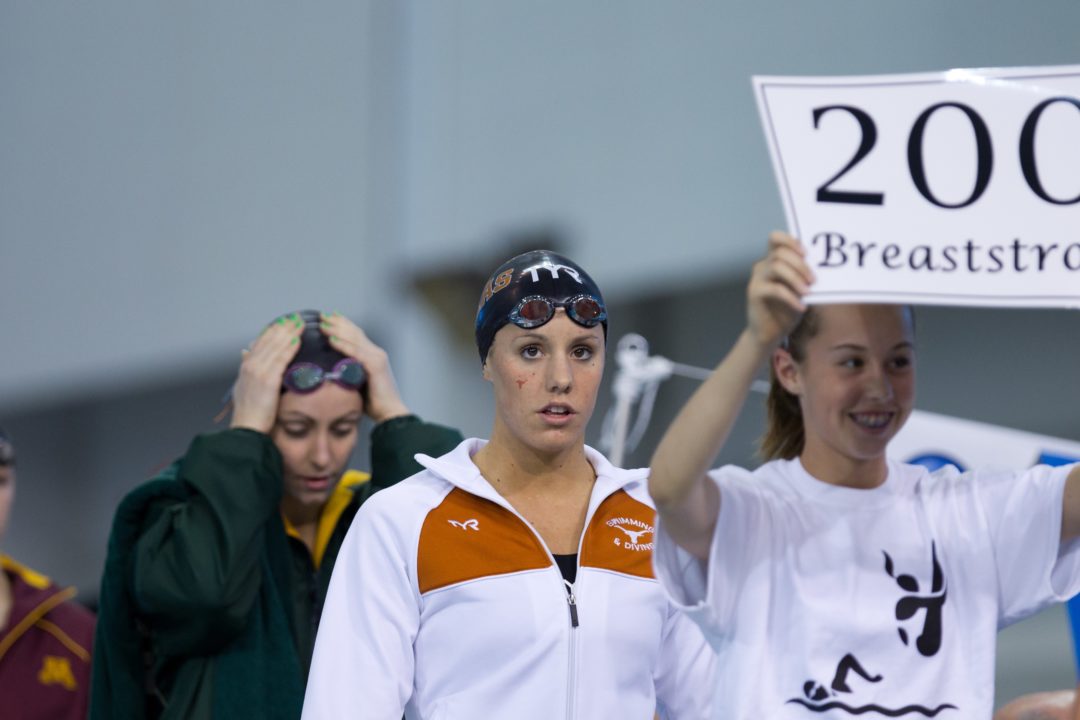 With the exit of Texas A&M and Missouri from the Big 12 Conference, and the apparent unwillingness by one side or the other to continue these series in the regular season, the Texas Longhorns have had to look outside of their conference to develop a worthwhile regular-season schedule.

There’s a few very notable things about this schedule:

1. No Hall of Fame Invite – The Texas Hall of Fame Invite in December is one of the best non-championship meets on the annual schedule; last year, it included Arizona and USC from the Pac-12. But this year, the big meet is not on the schedule. It will be interesting to see if another huge December invitational of that caliber will arise. The Big Ten (Iowa, Ohio State) each host one, but it’s always tough to convince warm-weather teams to go to Iowa and Ohio that time of year.

2. Short Course Winter Nationals – Both teams will be using USA Swimming’s Winter National Championship meet, which they are hosting, as their mid-season meet (this hosting explains why there’s no Hall of Fame Invite this year). This will still give them plenty of mid-season competition, but we’ll have to see how many other big college programs come into town for that meet. More typically do so when it’s in yards, like this year, as compared to long course meters, like it is in Olympic years. The Texas men have the “Georgia Invitational” on the schedule during Short Course Nationals, but that could be for just divers based on its placement.

3. Brutal Dual Meet Schedule – Both the Texas men and Texas women will be tested early and often this season in dual meets.

The men open up against a North Carolina State team that had a big breakout last year. They then will use split-squads (as they often do early with the season). One squad will be sent to the Mansfield Invite north of Dallas, the only time they’ll see Missouri and A&M this year. The other will stay home and host the annual tri-meet with Indiana and Michigan, which will match up three top-10 teams from last year’s NCAA Championships. After Short Course Nationals and a competition break for the Holidays, they will have a tough two weeks that will include meets at Auburn, at Georgia, and hosting a two-day meet against Arizona, before heading back into Big 12’s and NCAA’s, held in Indianapolis this year.

The women will start with the SMU Classic; the lineup for that meet has not yet been released, but it usually attracts good competition. That meet, however, allows only very limited rosters, so the first full-squad meet will be when Indiana comes to town in a 9 vs. 13 matchup from last year’s NCAA Championships. The week after, they will head to the Bay area for back-to-back duals with defending National Champs Cal and Stanford in early November. They too will then take a bit of a break until Short Course Nationals as they focus on adapting to the training style of new coach Carol Capitani. Next, they will head to Auburn and Georgia alongside the men, followed by a dual meet with TCU: the only non-invite matchup with an in-conference team for either the men or the women. The Arizona women come to town for a tri with SMU next (a week after the Arizona men are there), and then Big 12’s and NCAA’s in Indy.

In about a month, the Texas women will face off against 5 of the 9 other top-10 teams from last season.

4. Big 12 Hosts – Texas will host simultaneously the Big 12 men’s and women’s Championship Meets. They really have the only facility left in the conference this season that is designed to host a meet of that size.

excited to see how the women do this year. they could be one of the cinderella stories at NCAAs.

How many teams are there in the Big 12? I believe there are only three men’s teams left! Now that is a real championship meet!

That’s correct, only three – but that’s all there were before too. Minus Texas A&M and Missouri, plus TCU and West Virginia