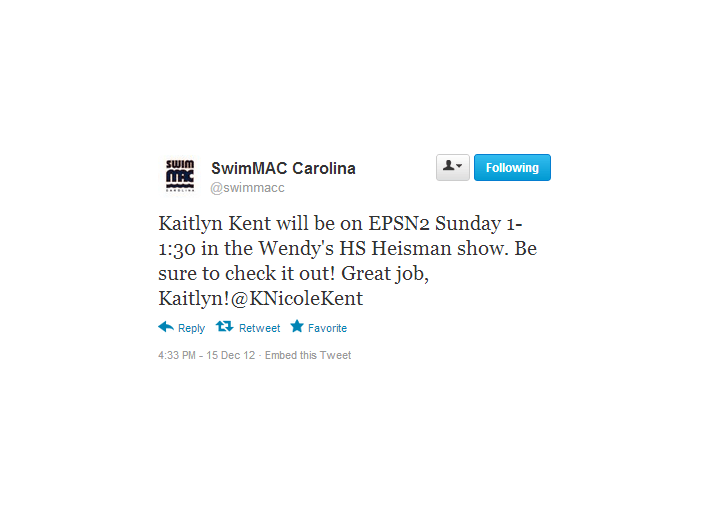 SwimMAC's Kaitlyn Kent is one of three aquatic athletes to be named a finalist for the Wendy's High School Heisman.

Three swimmers who were named National finalists for the Wendy’s High School Heisman will be featured on ESPN2 on Sunday, December 16th from 1-1:30 Eastern Time as a part of the presentation of the top high school athletes in the country.

The program, co-sponsored by ESPN and Wendy’s, runs in parallel to the Heisman Trophy award that is handed out to the country’s top collegiate football player each year. The winner of this year’s college award was Texas A&M quarterback Johnny Manziel.

The high school Heisman, unlike it’s college counterpart, can be given to an athlete in any sport and takes into account academic achievements as well.

This year, the winners of both the boys’ and girls’ awards are members of their school’s swim teams, and another named finalist is also a swimmer.

The women’s High School Heisman went to diver Zoe Alaniz from W.B. Ray High School in Corpus Christi, Texas. She is currently ranked #1 in her class of 473 seniors, is a three-year All-State award winner (and will be going for a 4th this year), and is the Region VII 4A Record holder on the 1-meter. She is also an Olympic Trials qualifier and placed 3rd at the Texas 4A & under State Championship meet last year. As of yet, she’s uncommitted to college that we can find.

The men’s winner won primarily on the basis of his exploits in cross country & track and field, but Sam Prakel from Versailles High School in Versailles, Ohio is also on his school’s swim team.  He is a part of the school-record holding teams in the 200 and 400 free relays as well as the 200 and 400 medley relays. He has been accepted on a scholarship to the Michigan State honors engineering program

Kent will be headed to the Air Force Academy to swim next fall under coach Casey Converse.

This award has been given every year since 1994

To see the award winner for each state, click here for full results.

Not the second year the award has been given. Started in 1994. Great scholarship program.