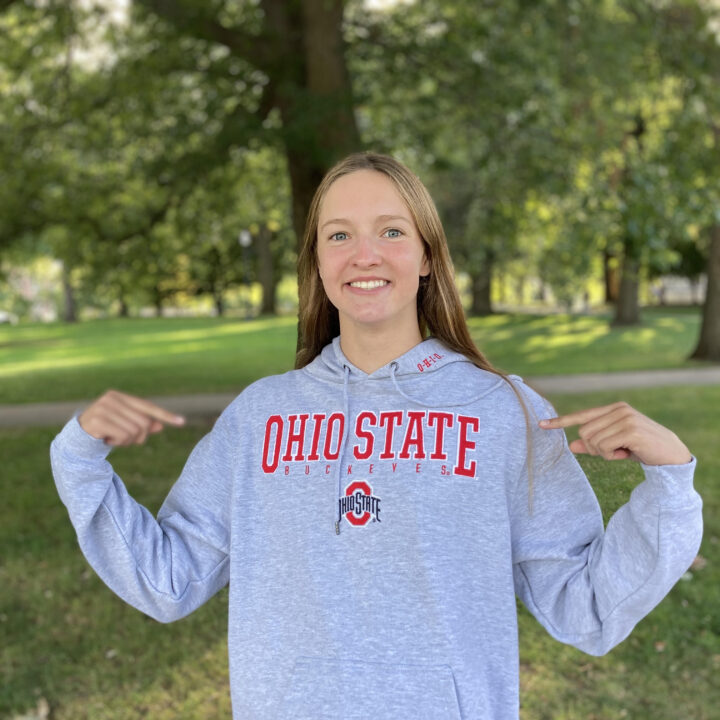 Delaware state champion Rachel Bockrath has announced her verbal commitment to the Ohio State Buckeyes, beginning in the fall of 2024. Current photo via Rachel Bockrath

Scholastic All-American Rachel Bockrath has announced her verbal commitment to The Ohio State University beginning in the fall of 2024.

Bockrath is a junior at Brandywine High School in Wilmington, Delaware. She also trains and competes year-round with Wilmington Aquatic Club.

“I chose Ohio State because of the incredible team culture, coaches, and academic opportunities. I can’t wait to be a part of such a special team. Go Buckeyes!!! 🌰⭕️”

Bockrath is a pure freestyler who leans more towards the shorter events. She holds Speedo Summer Junior National qualifying times in the 50m (26.45) and 100m freestyle (57.32).

Bockrath is a four-time Delaware Interscholastic Athletic Association (DIAA) State Champion. Last season as a sophomore, she defended her state titles in the 50 (23.18) and 100 free (49.81), posting best times in both events. Her 100 free broke the DIAA state record of 49.96, which had been held by Kaitlyn Jones since 2013.

The Ohio State women have captured the last three Big Ten Championship titles. They also placed 9th at the 2022 NCAA Division I Championships, just 15 points behind 8th place Cal. Despite placing second in the 200 and 400 freestyle relays at Big Tens, sprint freestyle was one of their strongest event groups individually at Big Tens. They out-scored every team in the 50 free with 91 points, and was only a point behind Michigan in the 100 free with 76 points.

It took a 22.79/49.79 to return to the C-final in the sprint freestyle events at last season’s Big Tens, meaning Bockrath is just inside of scoring in the 100 free. Amy Fulmer took 2nd at Big Tens in the 50 free for the Buckeyes last year with a time of 21.71. Teammate Katherine Zenick was 5th in the event, going 21.96. Fulmer took 2nd again in the 100 free (47.46), while Zenick was close behind in 3rd (47.57). The two combined with Teresa Ivan and Kristen Romano on the 400 freestyle relay, while Emily Crane took Romano’s spot for the 200 freestyle relay. Ivan will be the only one of that group that will still be in Columbus when Bockrath arrives.

Ohio State’s current freshmen class ranked #13 on SwimSwam’s rankings of the 2022 recruiting classes. Despite this, this class and the next one is thin on sprint freestylers, with Sydney Davids (23.64/50.75) being the only one who swims the events.

Bockrath joins Colorado native Mila Nikanorov and Canadian Sienna Angove in the Buckeye’s class of 2028. Nikanorov is primarily a distance swimmer, but goes down to the 200 (1:49.09). Angove is also more distance-oriented, but holds best LCM times of 26.39/57.67 in the sprint freestyle events.