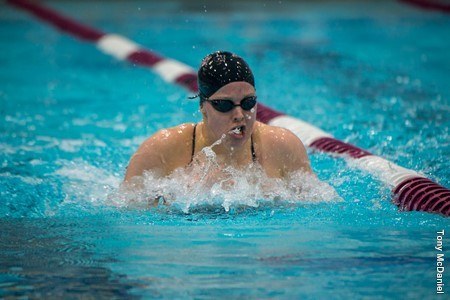 CARBONDALE, Ill. — The Southern Illinois swimming and diving program concluded the SIU Invitational with team titles and a 14-year old school record broken by Adam Cernek on Saturday afternoon inside Shea Natatorium. Evansville finished second on both sides, followed by Wisconsin-Whitewater in third.

Eden Girloanta swam away to a 16-second win in the 1650-yard freestyle to open the evening session. Her mark of 17:04.47 was just two seconds shy of a career-best.

SIU recorded a one-two finish in the 200-yard backstroke. Juliana Carvalho placed first with a career-best time of 2:01.11, while Deven Speed was second at 2:03.53.

Sierra Forbord completed the freestyle trifecta, as she took first in the 100-yard freestyle with a time 51.03 — .74 seconds shy of the school record. On days one and two of the SIU Invite, Forbord won the 50- and 200-yard freestyle events.

Payton Parman impressed in the 200-yard butterfly with a winning mark of 2:04.53.

*Men’s team
Adam Cernek highlighted Day Three for the men’s team with a career performance in the 200-back. The freshman raced to a school-record and NCAA B-cut time of 1:45.02 in the event, which bested Marcelo Possato’s mark of 1:45.16 set during the 2004-05 season.  It was the second school record set by a Saluki on the weekend. Laura Carver of the women’s team broke the 200 individual medley record on Day One of the invite.

Uriel Tejeda Barajas closed individual competition with a victory in the 200-fly (1:51.08) — his first as a Saluki. Max Ransom placed second to Tejeda with a time of 1:51.08.

The SIU Invite marked the final team event of 2019. Select swimmers will compete in the U.S. Open Championships from Dec. 4-7 in Atlanta, Ga. The Salukis will commence the 2020 season on Jan. 18 in a tri-meet against Little Rock and Henderson State.

CARBONDALE, Il.– The men’s and women’s swimming and diving team closed out a three day event at the SIU Invitational.

The Aces wrapped up the fall season and will be back in action against Missouri State on January 11.

The University of Wisconsin-Whitewater’s men’s and women’s swimming and diving teams each finished third at the three-day Saluki-Invite in Carbondale, Ill.

Freshmen Madyson Gomez (Cary, Ill./Dundee Crown), Emily Rundahl (Sun Prairie, Wis./Sun Prairie) and senior Shayna Putney (New Berlin, Wis./Eisenhower) qualified for the A finals in the 200-yard backstroke. Gomez placed fifth with a 2:11.33, Rundahl placed sixth with a 2:16.12 and Putney rounded out the group, finishing in eighth in a time of 2:21.74.

Theobald and Schlomann joined senior Bailey Weston (Fort Atkinson, Wis./Fort Atkinson) and freshman Savanna Bitz in a third-place finish in the 400-yard freestyle relay with a time of 3:40.25.

For the men, freshman Joey Wenszell represented the Warhawks in the 200-yard backstroke and 200-yard butterfly. In the backstroke, Wenszell finished sixth with a 1:55.77. In the butterfly, he placed seventh in a 1:56.56.

UW-W had four top-eight placers, all in different classes, in the 1650-yard freestyle. The group included sophomore Tristan Whiting (Hayden, Idaho/Coeur d’Alene Charter Academy), senior Chase Searcy (Lincoln, Neb./Southeast), junior Jordan Kreitzman (Milwaukee, Wis./Rufus King) and freshman Jamey Hines (Aurora, Ill./Metea Valley). Whiting finished in third with a 16:40.87 and Searcy’s 17:22.63 was good for sixth. Kreitzman placed seventh in a time of 17:29.37 and Hines rounded out the group with a 17:31.21.

The last individual was Tyler Chatterton (Kenosha, Wis./Tremper) in the 200-yard breaststroke. He finished in fifth with a 2:07.16.

Chatterton, Wenszell, Jelich and sophomore Alex Tenhagen (Burlington, Wis./Wilmot Union) combined for a third place finish in the 400-yard freestyle relay in a time of 3:12.86.

The Warhawks return to action on Saturday with a trip to face UW-Stevens Point for their second WIAC matchup of the season. Meet start time is slated for 1 p.m.