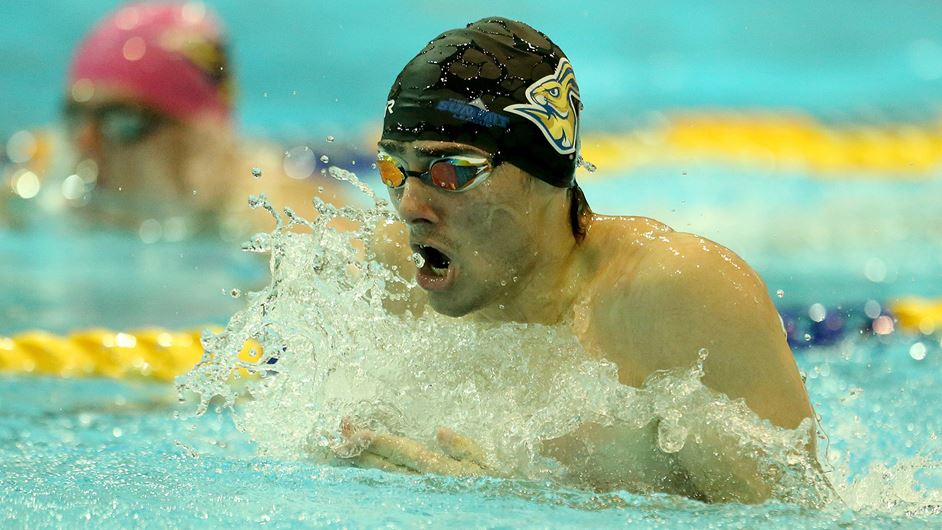 The SDSU women won 178-116 over Augustana, while the Jackrabbit men topped the Vikings 196-98. Current photo via Dave Eggen/Inertia

A junior from Savaneta, Aruba, Timmer set a new Marshall Center Pool women’s standard in the 50-yard freestyle, clocking a winning time of 23.92 seconds. That broke the previous mark of 23.97 seconds set by North Dakota’s Carissa Gormally in 2009.

Timmer also claimed two other individual events and opened the meet by swimming on the Jackrabbits’ winning 200 medley relay. She won the 200 freestyle in 1 minute, 55.84 seconds and closed her night by cruising to victory in the 100 butterfly with a time of 58.90 seconds.

The Jackrabbits’ Sianne Downes edged Walz by one one-hundredth of a second to win the 100 backstroke in 58.27 seconds. Downes was runner-up in the 200 back behind Walz with a time of 2:09.09, with Walz also taking second in the 50 freestyle behind Timmer in 25.17 seconds.

Abbi Rouse swept the diving events for SDSU, winning the 1-meter competition with a score of 221.16 and claiming the 3-meter title with 223.80 points.

UP NEXT
South Dakota State, 1-1 overall, is schedule to host Iowa State in dual action Oct. 15. Start time is set for 5 p.m.

Smith clocked a winning time of 53.28 seconds in the 100-yard backstroke for his first event title, then closed the individual portion of the meet with a victory in the 200 individual medley with a time of 1 minute, 58.68 seconds.

Wheeler swam his way to victories in the breaststroke events, winning the 100 in 59.80 seconds and the 200 in 2:12.28. He also swam on the winning 200 medley relay as a member of the Jackrabbits’ B relay team. The quartet of Caleb Harthoorn, Wheeler, Naested Smit and Rafael Negri edged the SDSU A squad by .37 seconds in the opening event of the meet.

Five other Jackrabbits claimed individual event titles on the night, including Charles Sieglaff in the 50 freestyle (:21.83) and Alex Kraft in the 100 freestyle (:48.09). Damon Venner added a victory in the 500 freestyle, out-touching Augustana’s Brady Monson by .19 seconds with a winning time of 4:58.10.

In the diving events, reigning Summit League Men’s Diver of the Year Zach Boyd posted a score of 306.30 points to win the 3-meter competition, while teammate Spencer Fritze earned a win on the 1-meter board with a score of 278.40.

The team of Negri, Seiglaff, Kraft and Justin Wallar closed the dual with a winning time of 3:12.27 in the 400 freestyle relay.

UP NEXT
The Jackrabbits are slated to return to competition Oct. 16 with a triangular in Fort Dodge, Iowa, against Iowa Central and Barton. Start time is set for 1 p.m.

BROOKINGS, S.D. — The Augustana swimming programs had promising results in its season opener in a dual meet against SDSU in Brookings, South Dakota, on Friday night.

The men’s team made a splash as the 20th sport to compete at Augustana, while junior Hailey Handevidt made her debut in the one and three-meter dive. Amongst the debut for the men’s team, Pedro Borin claimed three event victories for the Vikings.

In total, the Vikings had nine first-place finishes, four on the women’s side and five on the men’s side.

“We had a great night of racing against a very talented and experienced South Dakota State team,” Augustana head coach Lindsie Micko said. “We were very competitive and will continue to get better as we gain more experience.

“I love the passion and enthusiasm this team has and look forward to another day of racing tomorrow.”

Augustana had a strong showing in the 1000-free with senior Taylor Beagle winning the event in 10:40.78. Freshman Leona Coha was close behind in second, swimming a time of 10:41.58.

The men of Augustana also showed strength in the 1000-free with three Vikings taking the top-three spots as freshman Aiden McCusker claimed victory in a time of 10:08.66. Kacper Mayerberg (10:20.73) and Jack Johnson (10:42.51) secured second and third in the race.

Jackson Dircks won the men’s 200-backstroke in a time of 1:57.14, over two seconds faster than the next swimmer.

Coha, already having a win and runner-up finish on the day, won the women’s 500-free in a time of 5:16.05, winning the event by over seven seconds.

The Vikings head back on the road for a dual meet against St. Thomas in St. Paul, Minnesota, Saturday slated for a 2 p.m. start.