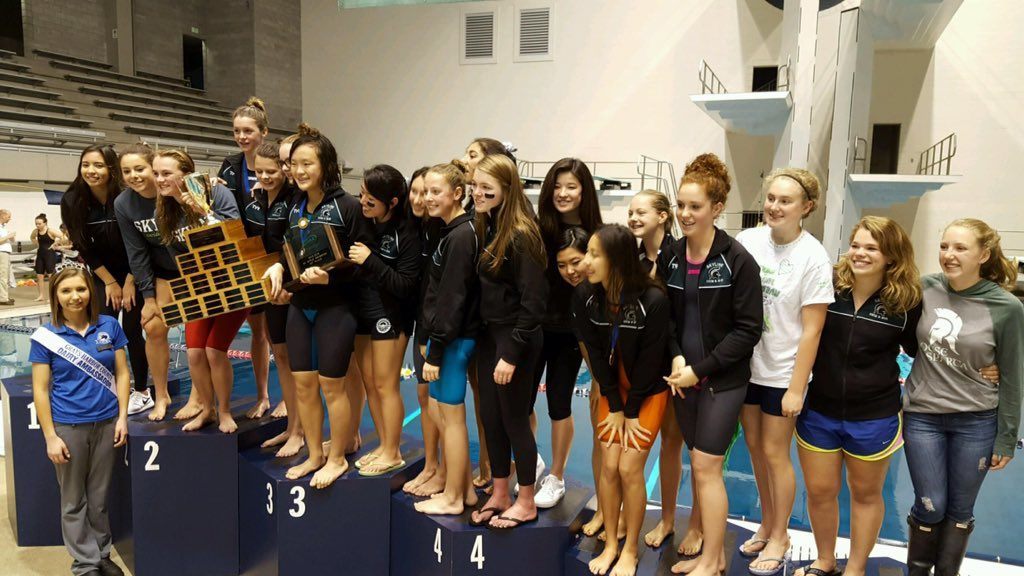 Skyline High School returned to the 2015 Washington State 4A Swimming and Diving Championship with a vengeance. Last year the Spartans were thwarted in their attempt to win a fourth consecutive state championship. This time around, Skyline won both the opening and closing relays and flashed plenty of depth to come away with the title.

Sophomore Emma Carlton of Mount Vernon recorded two automatic All-American times and was named “4A Swimmer of the Meet” for the 6th place team. Carlton won the 50 freestyle (23.29) and finished second in the 100 butterfly (54.46)

The quartet of Christina Bradley, Danika Himes, Kathy Lin, and Sarah DiMeco got Skyline off to a great start, winning the 200 medley relay in 1:47.01. That victory is even more impressive in that all but Lin are just 9th graders. Lin, DiMeco and Bradley joined another freshman, Stephanie Young, on the winning 400 freestyle relay (3:31.59).

Another Mount Vernon sophomore, Emma Frey, each came away with a win in the 100 backstroke. Frey cruised in 56.70.Wenatchee junior Jennifer Wierzbicki just got the touch on Carlton to win the 100 butterfly (54.44). Senior Kelsi Hinkley of Richland won the diving with 421.70. Willow Lopez-Silvers, a junior from Curtis High School won the 100 freestyle (52.39).

Despite winning no individual events, Skyline was the strongest team, putting swimmers in the top eight of every event except for the 50/100 freestyle.