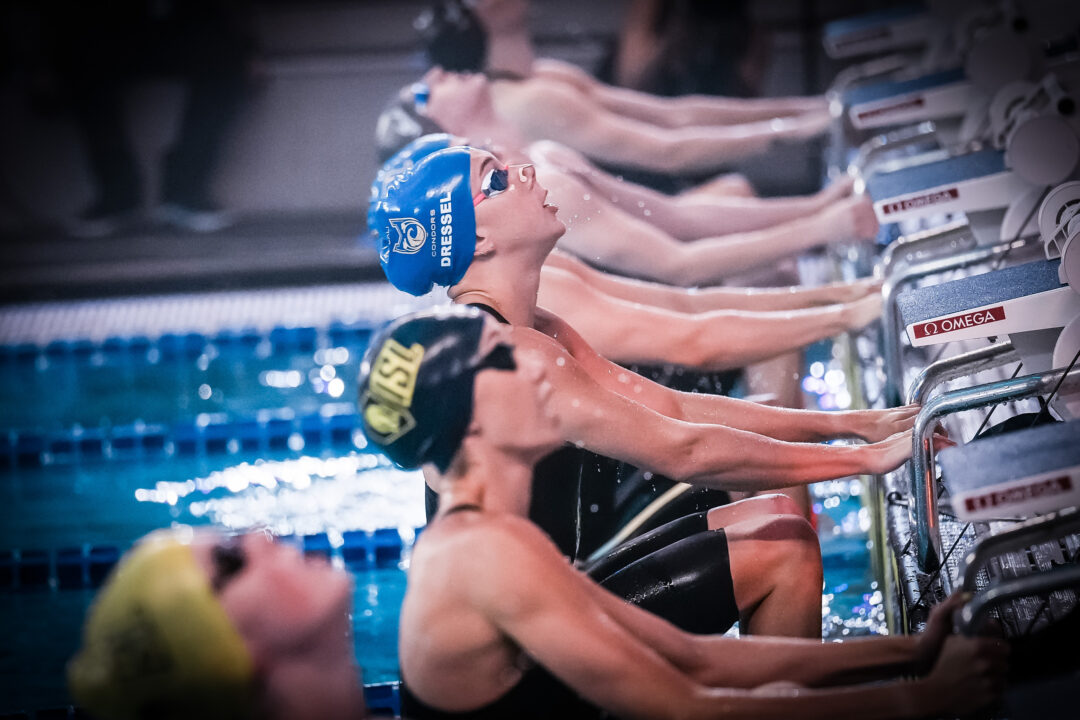 Sherridon Dressel, younger sister of ISL MVP Caeleb Dressel, won 2 races in her ISL 2021 season opener, topping the 50 back and 100 back this weekend. Current photo via Mike Lewis/Ola Vista Photography

The rich got richer on weekend 1 of the 2021 ISL season, where the defending champion Cali Condors came out swinging, securing 707 points to win by 304.5 ahead of LA Current – the second-best of the four US teams in the league and the second-place team in Match 2.

For reference – the gap between Cali and LA in the first meet was bigger, by a substantial margin, than the total number of points scored by the 4th-place New York Breakers.

With smaller Jackpot margins and stiffer minimum time standards, the draft wasn’t able to offset the value of superstar swimmers. For Cali, the top of that superstar list, 2020 league MVP Caeleb Dressel, did what he was supposed to do, scoring 93 points even without swimming the ‘skins’ race. Beata Nelson and Lilly King were also fast. Cali had 8 out of the 12 top swimmers in the meet in total.

But Caeleb didn’t do it alone, as two new stars emerged in the team’s season-opener. One, Coleman Stewart, broke a World Record, became the first swimmer in ISL history to steal all of the Jackpot points in an event, and won the meet MVP.

The other will have a familiar name: Sherridon Dressel, Caeleb’s younger sister, came into her own as a pro this weekend, winning two events and placing 2nd in the ‘skins’ event.

Sherridon won the 50 back on day 1 of the meet, swam leadoff on the team’s 2nd-place 400 medley relay (they went 1-2 in the race), won the 100 backstroke, and finished 2nd behind her teammate Beata Nelson in the 50 backstroke skins race.

It’s worth acknowledging that Nelson was the fastest 50 and 100 backstroker in the meet, and if Cali had used her in those races, she was likely to win. But so great are the riches of the Condors that they were able to use Nelson in the IMs, relays, and 200 backstroke, where they otherwise are very weak, and leave Sherridon to take the backstrokes.

In one sense, this is the format working: in a league that is constantly insisting that “the times don’t matter” and that “it’s all about the points,” this sort of strategy is what the ISL needs to make the meets more interesting than a regular swim meet to an audience that prefers team results to individual results.

In another sense, the format of the draft failed to really equalize the competitive balance of the league, with the Condors so far appearing to be even stronger – at least while teams like the Current are without stars like Ryan Murphy, who would have been the best challenges to Stewart’s dominance.

Sherridon Dressel didn’t get a lot of chances to race individually last season. She swam the 50 back in Match 1, the 100 back in Match 8, and then both races in the final.

We’d be foolish to pretend that last season, when teams were able to recruit openly, that Sherridon’s inclusion on the Condors’ roster, specifically, wasn’t a direct result of her being Caeleb Dressel’s sister. But Sherridon showed in college that she was a late-bloomer (unlike her brother, who was a star already in high school).

As such, it fits her pattern to continue to improve in her 2nd year in the league, and probably more beyond it.

Sherridon Dressel‘s success this season should continue next week, as the Condors manage to avoid most of the league’s top female backstrokers early in the season. Among the top 8 female sprint backstrokers in the league last season (where Sherridon ranked 9th), two (Olivia Smoliga, Nelson) are also Condors; one (Rio Shirai) is not in the league this year, and four (Toussaint, Masse, Seebohm, Bratton) are on teams that the Condors don’t race in the first two weeks of the season.

She will face Ali DeLoof of the DC Trident and Kathleen Dawson of Aqua next week, and the week after that will face Kira Toussaint of the London Roar, so she’ll get a bigger test in the coming weeks than she did this week, but the Condors are on a tear that means that nobody is going to get close to them until there are dramatic roster shifts from athletes arriving in, or departing from, Naples.

btw just a heads up Kathleen Dawson is with the Aqua Centurions now, not the London Roar

It’s so annoying when they just refer to her as “Caeleb’s Sister” she made a name for herself and they swim completely different events. People need to chill and just let her shine

I think it’s poor taste to say she was included on the roster because she’s Caeleb’s sister. There’s nothing concrete to support that. CAC actually has a couple former Gators… and actually can’t think of any on a different ISL team.

Agreed. It took me a minute to understand that’s what Braden was saying, the sentence is written in a very confusing manner.

“We’d be foolish to pretend that last season, when teams were able to recruit openly, that Sherridon’s inclusion on the Condors’ roster, specifically, wasn’t a direct result of her being Caeleb Dressel’s sister.”

Agreed, her times definitely warranted her a pick. At least a 50 point 100 back and being an All-American deserve to be picked up IMO

I’m 100% we can trace all of these IP addresses to Knoxville because your argument is “being an All-American.”

At some point, we all have to acknowledge that there are about 5x as many AA awards given out in swimming as football, 10x as many as basketball, etc. etc.

I’m proud of my All-America honor, and I of course put it on my resume every time I’m looking for a job. But internally, if we’re talking about the bests of the bests, we gotta be honest about what it means.

I mean said 50 point 100 backstroker + All-American to illustrate a point, and I’m a Cal fan who lives in CA, but sure dawg why not