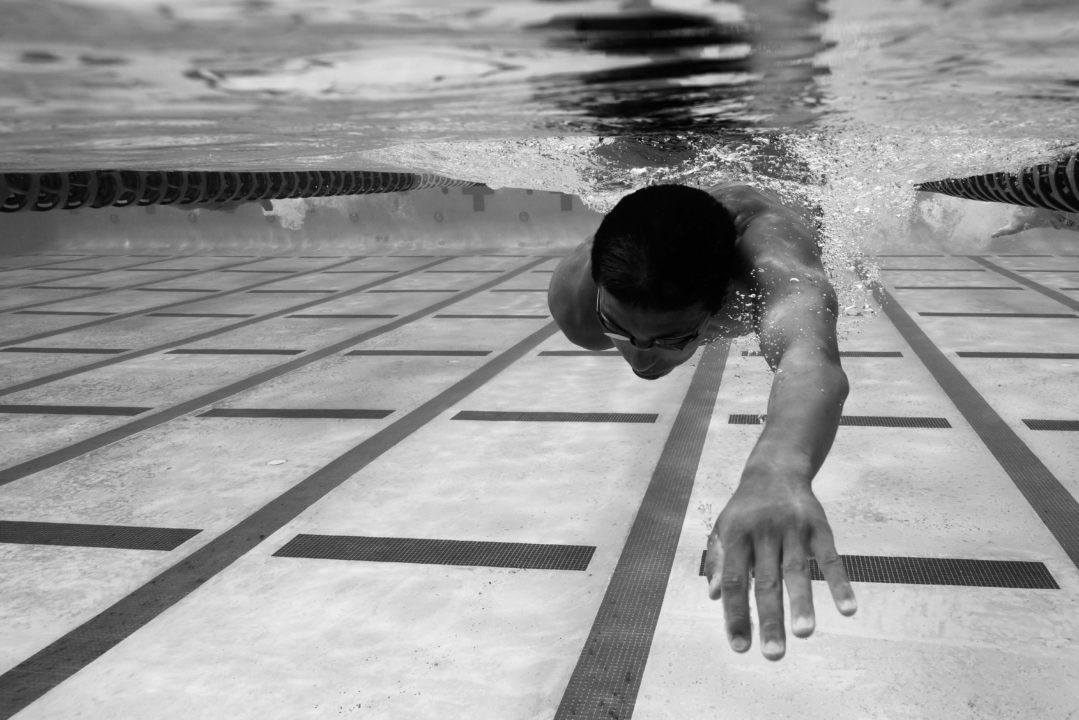 In 1981, when I was ten years old, I swam the 100-yard freestyle in 1:00.68 at the Illinois YMCA State Championship. Current photo via Mike Lewis/Ola Vista Photography

Olympic hopeful Zoe Thatcher, a former swimmer at Auburn University, has published a book with her father, Geoff Thatcher.

Fast forward nineteen years. Swimming about thirty to forty minutes three times a week, I won the USMS Masters National Championships at the age of 40 in 48.42! I swam haphazardly for the next year, then took a year off, and then, at 43 years old returned to masters swimming and at the age of 44 went 48.25. With FINA Masters World Championship approaching in two years, I made the decision to train seriously in an attempt to win. I had my stroke analyzed by Gary Hall Sr. at the Race Club, hired Bo Hickey of Ritter Sports Performance for strength conditioning and injury prevention, and then increased my training to one hour each weekday morning with the Springfield Aquatics Masters with coach Thomas Baumann. At 45 years old, my time dropped to 47.69 and at last year’s USMS Spring Nationals, I swam a 46.63. That is the third fastest of all time behind Nicolas Granger, 46.21 and US Olympian David Sims, 46.46. It is also faster than NCAA All-American Richard Hughey, US Olympic Gold Medalist and World Record Holders Rich Seager and Matt Biondi. Meanwhile, my time for the 100 breast was fast enough to qualify for this weekend’s TYR Pro Swim Series in Austin.

En route to the World Championships, I set three USMS National Records in free, breast and IM. The fact that I swam the 100-yard breast faster at age 46 than I did at 21 caused me to start re-thinking what is possible. You can see my time progression in three of my best events below.

How can I be swimming faster twenty-five years later training only 25% as much as I did at 21 years of age? Of course, improvements such as tech suits and better pools have made a difference. My nutrition is better, too! So, this begs the question: what would happen if Michael Phelps or any of our Olympic Team members came out of retirement after fifteen years at forty years of age or older? Is it possible to swim faster at such an age and after retirement?

We do have some examples, most notably Janet Evans and Dara Torres.

But let’s look at some of the best sprinters on the men’s side. My idols growing up were Rowdy Gaines and Matthew Biondi, both of whom I met when I was a young age-grouper.

As far as breaststroke is concerned, Steve West is a great example. In 1996, West finished third at the US Olympic Trials in the 200 M Breast. Sixteen years later, at the 2012 Long Course Nationals, at the age of 40, West swam a 1:03.76 for the 100 breast. Of course, it was a US Masters National Record and FINA World Record. In addition, West qualified for the 2012 US Olympic Trials. He also set Masters records and made the Olympic Trials cut in the 200 M Breast, swimming 2:20.65 and then eventually lowering that to 2:20.34, thereby becoming the first man over 40 and the oldest man ever to qualify for the US Olympic Trials. In 2017, West moved into the Men’s 45-49 age group where we faced off in head to head competition at the USMS Spring Nationals. As thrilled as I was to swim a lifetime best of 57.67, I was second to West who set a new national record of 56.30.

Over time, I have caught up to my boyhood idols. I think about Roger Bannister’s record-breaking 4-minute mile. Before he did that, people thought it was impossible. After he did it, as of 2013, 1303 people have since surpassed that barrier. Is it possible that someone who didn’t qualify for Olympic Trials in their twenties could do so in their forties? What if someone does it? Would that open the floodgates?

Take the case of Daniel Lotano who swims for Palm Beach Masters in Florida. He didn’t even swim in college. All he has are masters times. At 35 years of age he started swimming masters and swam a 22.34 50-yard freestyle. This past year, at 37 years of age, he swam 20.93 and 23.99 for the 50 Meter freestyle. We recently spoke about the possibility of him qualifying for the 2020 US Olympic trials. The qualifying time for 2016 was 23.29, so he definitely has a realistic shot.

With some focused, strategic training and a little sponsorship help, I believe he can make it. If he does, that would indeed set the standard for a new paradigm of swimming progression.

(Note: The above compilations may not bet exhaustive or 100% accurate. It is the best I could find based on internet records. I welcome any corrections)

Siphiwe is a role model for swimmers making comebacks. He did all of the right things in swimming, strength training, mental training, nutrition and recovery to get to where he is today. In fact, Siphiwe taught me more about nutrition than any other source prior to our meeting. I am proud to have coached him some.

Thanks Gary. None of my success would have happened were it not for your help, your analysis of my stroke on the velocity meter, and the “infamous” suggestion to increase my ankle flexibility by sitting on my ankles everyday: https://www.instagram.com/p/BX3XD7ejIXq/

Masters swimmers have changed what people believe possible as we age.

A lot of over 40 competitive athletes are using testosterone. Do they drug test at US Masters?