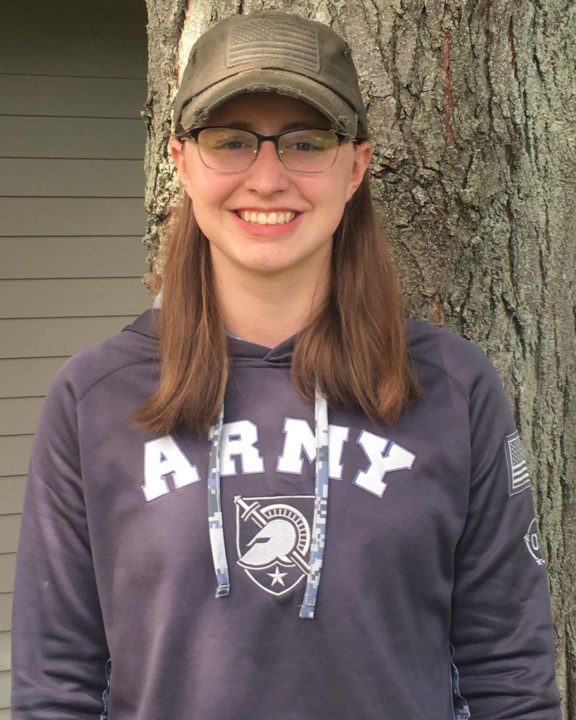 Sarah Platt's best time of 1:04.00 in the 100 yard breaststroke would have placed her in the A final at last year's Patriot League Championship meet.

Sarah Platt, a rising high school senior from the suburbs of Fort Wayne, Indiana, has verbally committed to Army West Point. Pending the receipt of an appointment, Platt will plan to arrive in New York in time for the 2021-2022 NCAA season.

“I’m excited to announce my verbal commitment to the United States Military Academy where I will have the opportunity to further my athletic and academic career all while preparing to serve. I want to say thank you to my family, friends, and coaches for supporting me. GO ARMY!!”

Instead, her big meet for the season, pre-quarantine, was the Carmel Swim Club Winter Invitational in January. There, she knocked more than a second off her lifetime best in the 100 yard breaststroke, swimming 1:04.00 in her best event. A month later, in er last official meet before quarantine, she added a 2:22.88 in the 200 breaststroke, which represented a two-and-a-half second drop from her previous lifetime best.

Platt showed some potential in the sprint freestyles early in her career as well, swimming a 25.63 flat-start in the 50 yard free as a freshman in high school.

The breaststroke group was a strength of Army West Point (and, for that matter, a weakness of Navy) last season. A pair of Army WP freshmen, Gillian Burch (1:02.06) and Mandolin Ngyuen (1:02.15) had the #2 and #3 times in the Patriot League last season, though both hit their peaks mid-year in a dual meet against Navy. In total, ARmy-West Point had 3 of the top 5 finishers in the 100 breaststroke at the Patriot League Championships, while Navy had just 1 swimmer in the A final.

Platt’s best time of 1:04.00 would have put her easily into the A final at that meet.