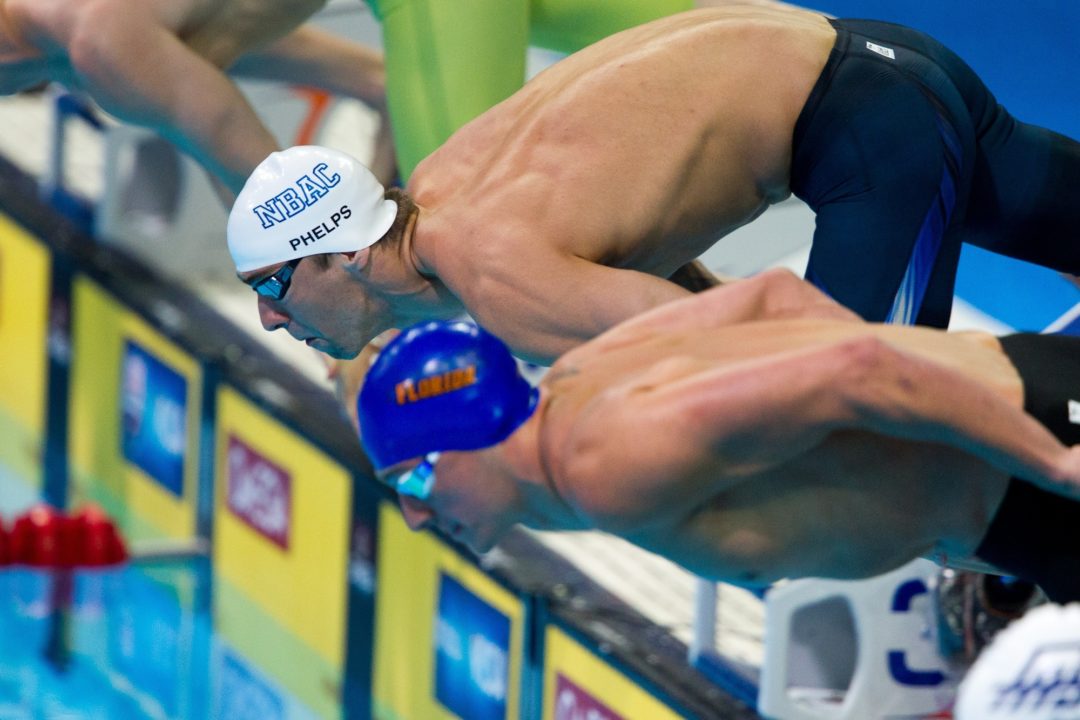 Olympic champion Kosuke Hagino just threw down a statement swim in the 200 back while competing in his native Japan tonight.

”Michael Phelps says he’s retired. The sport will miss him, he is one of my favourite rivals and I will miss him. But I think he will come back,” Lochte said. ”When you do something for so long every day … he’s still young. I think he will be back for Rio,” Lochte added. ”We’ll see, he’ll miss the sport.”

Phelps has been adamant he’s done, despite several close swimming peers predicting he’ll come back. Many of these Olympic brothers and sister haven’t gone on the record. They’ve shared their opinions in private, at the fall parties and numerous awards shows following the 2012 Olympic Games in London.

Other Olympians have gone on the record, publically, like Dara Torres. After she barely missed making the 2012 Olympic Team, she tweeted Phelps wouldn’t stay retired, and asked her followers, “anyone care to wager?” Phelps replied that he would take that bet.

Anthony Ervin, who, like Torres, came out of retirement, tweeted, if Phelps doesn’t come back, “I’ll eat my fins.”

Bottom-line, Lochte’s far from alone in his opinion.

Something many Olympians know — and many fans understand — is that most athletes suffer retirement blues. This is a fact, no matter how successful an athlete has been. In retirement they go through a period of depression. Adjusting to normal life is not easy. The struggle is physical and chemical. Your body changes dramatically when you stop training 10 to 15 sessions per week. The daily “high” from pushing yourself to the extreme is not something you expect to suffer withdrawal from, but you do. Moreover, the singular goal of reaching a personal best time is replaced by slightly “fuzzier” goals (though just as important), like career milestones, simply staying healthy, and giving back to your family and community.

Phelps appears to be on the right path to make a smooth transition into his post Olympic life, feeding his competitive spirit with golf, focusing on his Foundation to giveback to the sport he loves. It appears he’s given retirement a great deal of thought. It appears he’s following a plan.

What keeps everyone guessing, and hoping Phelps will return, is his age. Phelps is still young. No one doubts for a split-second he could add more Olympic hardware to his 22 medal haul in Rio. Then again…no one else in the world has experienced winning so much, and 22 medals may be more than enough for the greatest Olympian of all-time.

Ryan Lochte is presently at the FINA Short Course World Championships in Turkey. On day one of prelims he qualifed first in the 200 scm freestyle with a 1:42.41, and first the 100 scm butterfly with a 50.16.

As he often tells us, “Listen to Ryan Lochte.” I think he’s right on this one, actually.

I thought Phelps would comeback (thought it all year), but I’m 50-50 now. Phelps appears to be very happy in retirement and that’s the biggest indicator of whether or not he will return. We’ll know a lot more Jan 2015…

Even if we restrict ourselves to just talking about Olympians, I think most of them after they finish–no matter how well it went–think back and wonder if they could have gotten another medal or that gold or silver instead of the bronze or even just a better time. (whatever the case may be). I think after Beijing Phelps truly left nothing on the table and would argue he’s the only one ever to have “truly” done that. I think that will make it easier for him to retire (unfortunately).

This is not so much news.
Even I, a lay person, already predicted that Phelps would un-retire for Rio the same minute Phelps announced he would retire after London.

aswimfan, glad you’re back! Where have you been??

ASWIMFAN….what Phelps does to prepare is painful. Toward the end of your career, going to practice (getting up early every day to get wet) is a huge challenge. If you’re not 100% committed, it doesn’t work, and/or you’re criticized harshly (like he was between 2009-2011). Consider (and Phelps knows this) that he can go to Rio in 2016 and actually make more money as a Legend (a retired star), traveling from venue to venue in a limo, getting nothing but appreciation. Simply put, life is easy. Going back to compete is not only challenging, he’s also risking a lot. Popov and Thorpe are examples that come to mind. Staying too long in the Olympic “game” actually hurts your Olympic status…if… Read more »

Dude is done…he didn’t even want to be a guest at the SC Worlds. He’s going to be so far out of shape in two years that he won’t be able to come back. Just look at Thorpe.

I hope Phelps comes back! The US could use him on the relays!