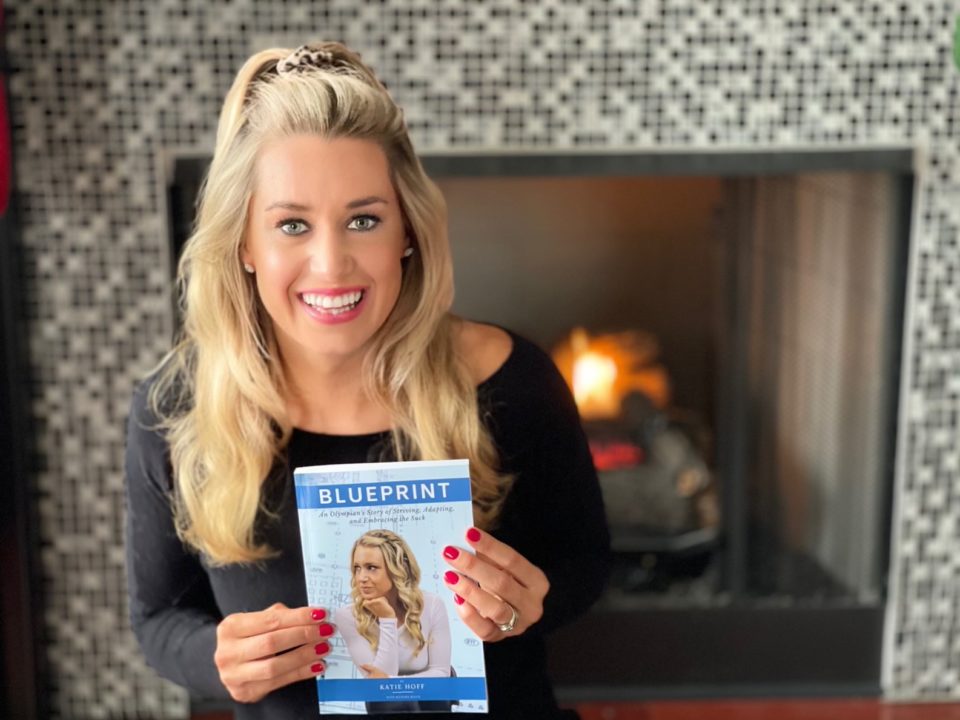 "Blueprint" is a candid account of the extraordinary life and athletic journey of one of America's greatest athletes and a champion in every way... Current photo via BLUEPRINT

“I have so much respect and admiration for Katie Hoff as a person and an athlete. She helped push the progression of women’s swimming and now courageously shares her insights and challenges in and out of the pool in Blueprint. Through it all, Katie’s mettle is gold.”
—  Michael Phelps
“Blueprint” is a candid account of the extraordinary life and athletic journey of one of America’s greatest athletes and a champion in every way–the remarkable two-time Olympian Katie Hoff. As a young swimmer growing up in Maryland, I was so fortunate to see first-hand the grace of Katie in and out of the pool. Her honesty and passion about her sporting and personal life shine through the pages of this well-written book, making it a must-read.”
You can buy Blueprint HERE, a great holiday gift for you swimmer, swammer of swim coach!

Go on. Blink your eyes.

How long do you think that took? A fraction of a second, for sure, but what fraction? A quarter of a second? A fifth? A “split” second, whatever that means?

Google it. Google it and you’ll find that for the average person, a blink takes about a tenth of a second. Pretty fast, in other words.

Now let’s put that tenth of a second in context. Say you’re in the Olympics, a swimmer, and you’re racing for a gold medal. The race is 400 meters long, eight lengths of a 50-meter pool, and you’re swimming freestyle. At the last turn, with one length of the pool to go, you’re ahead, by about a full body length, which at the Olympics is a lot. Thirty meters from the finish and you’re still winning, but the swimmer in second place has started to close the gap. Ten meters out, your lead continues to shrink, but it still looks like you’re still heading for gold. Five meters. Four. Three. Two. You stretch. You reach out for the wall. But you’re not the only one reaching for the wall. The swimmer two lanes over, the British girl, the one who has been closing that gap, is reaching for it, too. Blink now and you’ll miss the most important part.

That race, of course, is not hypothetical. It’s my race. The year is 2008, and the pool is at what they called the Water Cube, the blue bubble-sided swimming venue for the 2008 Olympic Games in Beijing. Everyone who follows swimming even a little bit remembers that Olympics because it’s the one where Michael Phelps won eight gold medals, breaking a record that had stood for 36 years. Some in the media called me “the female Phelps,” because I was supposed to come home from Beijing with a bunch of gold hanging around my neck, too. I didn’t discourage the label. Mine may not have been a household name like his, and I wasn’t going to win eight gold medals, but winning four wasn’t out of the question. Or now three, as the day before this race I finished third in the 400-meter Individual Medley, an event I was favored to win. The swimmer who won that race broke the world record I had held. Third place means bronze, and bronze is nice, but it’s not gold.

The 400-meter freestyle is not my best event, and in this one I’m not the favorite. And yet when I do my flip turn and push off the wall for the last time and head into the final 50 meters, I’m ahead by enough that it looks like I’ve got this one.

At the finish, if you watch a video of the race, you can’t tell who gets there first. But the wall—the high-tech wall with its state-of-the-art micro-sensors—the wall knows. And it’s not me. I touch second, by seven hundredths of a second, or less time than it takes to blink.

I’ve only watched that video once, and that was by accident. Why don’t I watch it? Because I don’t have to. I know what happened. I live with what happened every day of my life. It’s changed my life, but for worse? For better? At the time I was sure it was for the worse. But now, I’m not so sure.

You can dive off into your life with the most precise blueprint for how it should unfold, but things don’t always go the way you planned. At least for me they didn’t.

This is my story.