Ranking the Records at Women’s NCAA’s 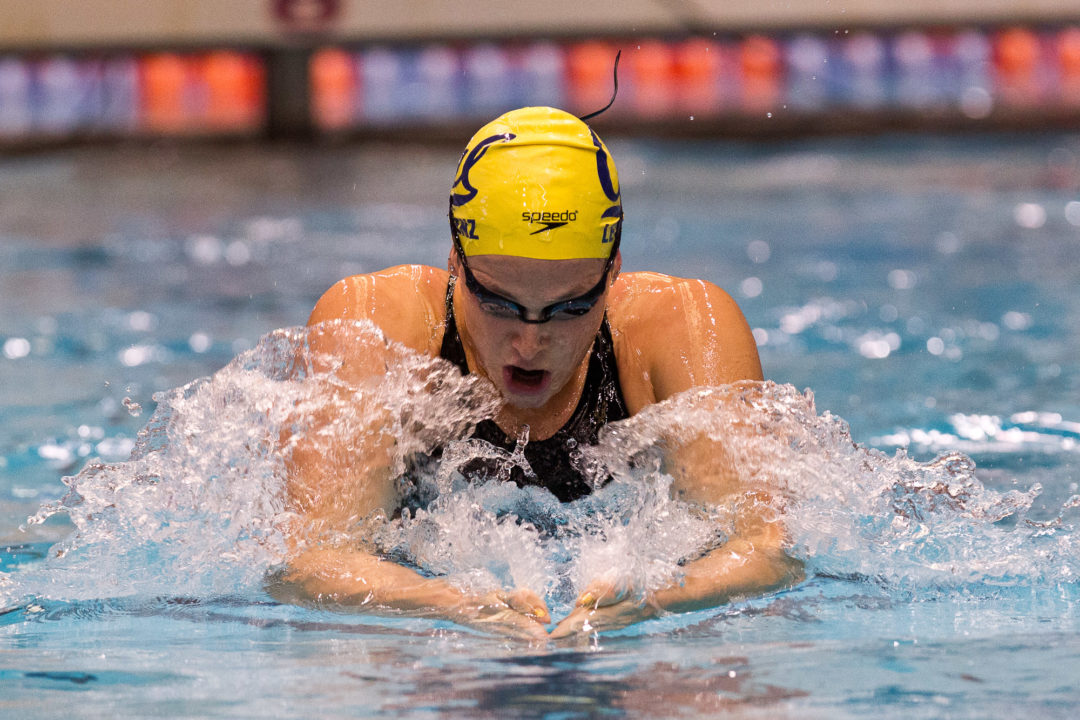 A full 7 NCAA Records were broken at this year's Championship, as were two more American Records on top of that. (Photo Courtesy: ©Tim Binning/TheSwimPictures.com)

In 2009, when a full 12 NCAA Records were broken, it was the end of swimming as we knew it. So perturbed were collegiate officials that not only did they follow FINA’s lead and ban the suits, they actually decided to list both the actual records, and the pre-2009 records, in the heat sheets at the 2010 Championships

But the attitude pulled a complete 180 this year. There were a total of 7 NCAA Records broken, 6, U.S. Open Records, and 5 American Records broken in the meet, which is a huge haul. Naturally, with such a chaos of records, there must be some sort of order and reason brought to it all. What better way than to rank them from top-to-bottom (bottom being strictly a relative term, because there’s no such thing as a “bottom” National Record).

1. Katinka Hosszu, Sr., USC, 400 IM
3:56.54 – NCAA/U.S. Open
old record:
NCAA/U.S. Open – Julia Smit, Stanford, 3:58.23, 2010 Pac 12 Championships
Hosszu absolutely obliterated this record, previously held by Stanford’s Smit in a way that just isn’t seen anymore. Even with Leverenz’s swim (see number 6), Hosszu is still the fastest swimmer ever in this event by more than a second. She didn’t do it alone, though – she was spurred on by what was easily the fastest 400 IM race in history. She was actually pretty far behind record pace through 150 yards, but then closed in a  53.5. That’s two seconds faster than Smit ever dreamed of closing this race, and that’s what destroyed the record.

2. Breeja Larson, So., Texas A&M, 100 Breast
57.71 – NCAA/American/U.S. Open
old records:
American/U.S. Open – Tara Kirk, 51.77, 2006 American SC Champs
NCAA – Breeja Larson, Texas A&M, 57.92, 2012 Big 12 Championships (prelims)
Earlier this year, Breeja became the first collegiate swimmer to break the 58-second barrier. Next up, she took down Tara Kirk’s American and U.S. Open Records. Larson is becoming stuff of legend, and probably already being used by coaches around the country to inspire there swimmers (much like basketball coaches do with the whole Michael Jordan cut from his high school team story). First, Larson didn’t really take swimming seriously until her senior year of high school. She then started telling people she wanted to swim a 57.75. She had it written on her mirror  all year. She was told there was no way it would happen; that she couldn’t possibly swim the fastest time ever this early in her career. But she did, and she’s got so much further to go.

3. Cal, 400 Medley Relay – Cindy Tran, Caitlin Leverenz, Sara Isakovic, Katherine Raatz
3:28.10 – NCAA/U.S. Open
old record:
NCAA/U.S. Open – Cal, 3:28.26, 2012 Pac-12 Championships
This relay still flabbergasts me. Not because of how fast it was – Cal had a swimmer in the top-5 of the 100 back, 100 fly, and 100 free, and Leverenz would have been there in the 100 breast if there was room for it in her schedule. Rather it was because of who wasn’t on this relay. Teri McKeever, in her infinite genius, kept their top freestyler Liv Jensen on the bench for this one, even though she was on it when they previously set the record at Pac-12’s. But at a minimum, this early in the meet, she would’ve been expecting at least a 47.0 anchor. Instead, they went with the senior Katherine Raatz on the last leg. And Raatz had no problem bringing them home on the anchor – even against names like Vanderpool-Wallace and Geer reading on caps as she looked down the pool.

4. Caitlin Leverenz, Jr., Cal, 200 IM
1:51.77 – NCAA/American/U.S. Open
old record:
NCAA/American/U.S. Open – Julia Smit, Stanford, 1:52.31, 2010 Pac-12 Championships
This is yet another race where multiple swimmers cleared the records. With only 50 yards to close after Leverenz’s big breaststroke, however, Katinka Hosszu just ran out of room. By about one stroke at that, as she was .03 behind. Leverenz broke this record by better than half-a-second.

5. Stephanie Peacock, So., North Carolina, 1650 Free
15:38.79 – NCAA
old record:
American – Janet Evans, Stanford, 15:39.14, 1990 NCAA Championships
Most NCAA records have gone down several times in the last 22-years. Most NCAA Records from 1990 have been bested 30 or 40 times since then. But not this one. Showing how far ahead of her time she once was, Evans’ record lasted for a long time, until Peacock broke it this year. Other reasons why this record is so impressive – this was only about the 6th time in her life that she had swum this race. She didn’t even try this race as a freshman. In the 5th swim of her life, she surpassed the NCAA “A” standard. On number 6, she broke the NCAA Record and beat a three-time champion in Wendy Trott. Her inexperience showed in this race – her pacing was a bit unusual for a time this fast, but she forced Trott to go with her. Again, Trott was also under this record. (In fairness, Katie Hoff and Kate Ziegler probably would have lowered this mark a few times since then, had both not surpassed college).

6. Megan Romano, Jr., Georgia, 200 Free
1:41.21 – NCAA, American, U.S. Open
old record:
NCAA/American/U.S. Open – Dana Vollmer, Cal, 1:41.53, 2009 Pac-12 Championships (relay leadoff)
This was the broken record that came out of absolutely nowhere. Until Romano split a 46.0 on a relay anchor on the first day of the meet, I don’t think anybody saw this record going down on the second day of the meet. With this swim, Romano has to make herself a serious contender for the US Olympic Team (in the words of her coach Jack Bauer, the United States NEEDS a Megan Romano on the Olympic Team). What’s going to be really fun next year is when Allison Schmitt comes back, and those two are both training together and competing. 1:40’s are within view.

7. Cal, 200 Medley Relay – Cindy Tran, Caitlin Leverenz, Colleen Fotsch, Liv Jensen
1:34.24 – NCAA/American/U.S. Open
old record:
NCAA/American/U.S. Open – Cal, 1:35.03, 2011 NCAA Championships
This is an identical quartet to the one that broke this record last season, so it’s really no wonder that they nabbed it again. Tran really got them on their way with a 23.44 leadoff backstroke leg, which is almost the fastest we’ve ever seen (and may be the fastest we’ll see for quite some time, unless she improves upon it next year).

8. Stanford, 400 Free Relay – Sam Woodward, Maddie Schaeffer, Andie Murez, and Betsy Webb
3:10.77 – American
old record:
American – Georgia, 3:11.03, 2011 NCAA Championships
Like a broken record, this broken record went down for the 2nd year in a row. There was no huge superstar anchor for the Cardinal, but after a bit of a shift in the lineup after prelims, this Stanford relay became extremely veteran (two juniors, one senior) with just enough youthful enthusiasm from the freshman Schaeffer, and four solid splits took them to a new American Record.

9. Caitlin Leverenz, So., Cal, 400 IM
3:57.89 – American
old record:
American – Julia Smit, Stanford, 3:58.23, 2010 Pac 12 Championships
If Leverenz had been the winner of this race with this time, this probably would have been much higher on the list, because of how impressive the swim, and her improvement this season, has been. As it was, she was bested by the Hungarian Hosszu. But Leverenz will be back again next year, and she could gun down this U.S. Open Record as well. But first, she’s got some big-time Olympic experience to gain.

Near Misses
There were also a few near-misses. Let’s recognize them quickly as well.

Caitlin Leverenz, Cal, 200 Breast – Leverenz touched in 2:04.76 to win this 200 breaststroke. That’s literally as close as you can get to a record without at least matching it, as Rebecca Soni’s mark currently stands .01 faster. Suffice it to say, Leverenz will let her fingernails grow out that much more before next year’s meet.

Cindy Tran, Cal, 100 Back – Cindy Tran’s 50.31 was the second-fastest 100 yard backstroke in history, and the best since another former Cal Bear – Natalie Coughlin. Tran might also have the best underwaters we’ve seen since Coughlin, so it’s appropriate. The mark still stands at 49.97.

I happen to look this up after the race this weekend, but Natalie Coughlin led-off Cal’s relay at the 2002 NCAA’s in 23.41.

As successful as Tran has been doing backstroke on the medley relays, I feel like next year she’ll be moved to the fly leg, with Bootsma on back and Pelton/Bing on free. Despite graduating half the medley relays, they’ll probably be even faster next year. I’m also a little surprised Tran hasn’t been more succesful at the 100 free. If she can put up 50.3 100 back and 51.6 100 fly, you’d think she’d flat start at least a 48 mid.

Chris – was thinking the same thing this weekend about Tran’s freestyle. It’s surprising that she couldn’t crack the Cal 400 free relay, because they’re not ALL that deep in sprinters.

I actually disagree on the medley though. I think they’ll leave Tran on backstroke, and use Bootsma on the fly leg, especially on the 400 medley. We won’t get a good idea of just how fast Bootsma’s fly will be coming in with her sitting out HS this year, but with that combo they’d have the best backstroker and probably a top 3 (at worst) 100 butterflier too.

As you said, Bootsma hasn’t done much scy swimming this season, but I feel that by the end of her first year at Cal, she have a better 100 back than Tran and Tran will have a better 100 fly. Judging by video of Bootsma’s 50.76 and her lcm times, she has a lot more room to improve (mainly underwaters) than Tran does, and I wouldn’t be surprised to see her at 49 mid in a year. Likewise, Tran can still push her underwaters on the 100 fly, where her time was .2 from the fastest at NC’s. Either way, their 100 fly/back splits will probably average out around 50 flat, and with Levernz at 57 mid/low and Bing/Pelton 47… Read more »

i think for the 200 medley, tran will be on the backstroke, but for the 400 itll be bootsma. I think you guys also forgot that kelly naze will be going there next year, and i think shell focus on her fly/IM and be around a 51 flat start by the end of her freshman year. so she could be on either relay as well. really their freshman class alone could be a championship relay. agreed, after this weekend i think franklin will be going to cal. and with her the dynasty will be unstoppable. and really the only way i see cal being defeated in the next 4 years is if franklin were to go somewhere like georgia or… Read more »